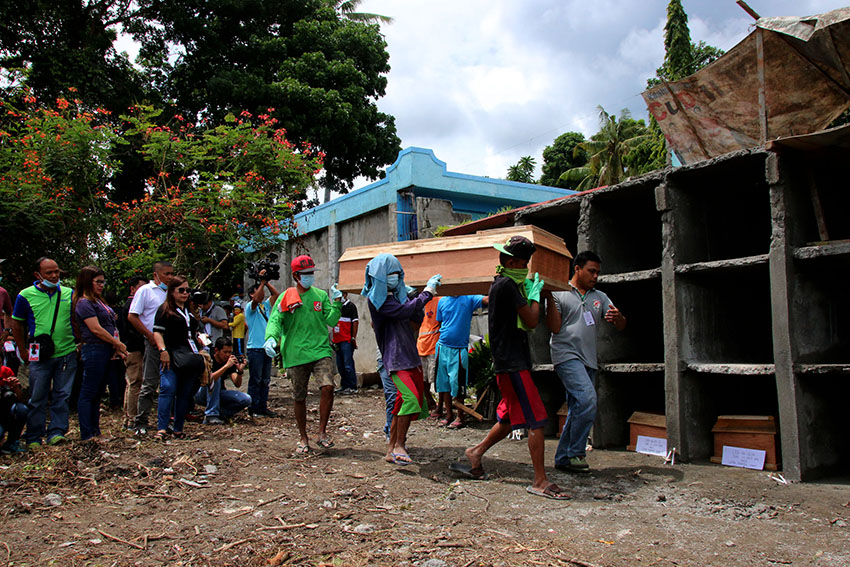 In this photo taken on June 15, eleven unclaimed bodies of civilians from Marawi were buried in Iligan City. The mass burial for the dead was carried out by the local government of Iligan City. (Alex D. Lopez/davaotoday.com)

DAVAO CITY, Philippines — The remains of 28 persons recovered in the battle zone of ​Marawi City will be buried in the city on Monday, the day President Rodrigo Duterte will deliver his second State of the Nation Address.

​H​owever, he said preparations ​we​re still not completed as of press time.

Adiong said they are also awaiting recommendations from the mufti (Muslim legal expert) to ensure that the burial of the cadavers respects the religious and cultural tradition despite not knowing whether they are Muslims or Christians.

“The fatwa is very important because if ever there is a Maranao or Muslim family who will claim their kin, at least we are guided when we exhume the remains,” he said.

The remains of those who perished in the ongoing war ​with the I​​SIS-linked Maute group and government forces ​in Marawi City will be temporarily buried in separate graves on Monday morning in a public cemetery owned by the provincial government in Barangay Makbara in Marawi City.

Adiong said the remains may include both combatants and civilians. As of July 19, ​there have ​86 died due to the crisis, 45 of whom were believed killed by terrorists​. Adiong said 41 died ​from various illnesses in evacuation​ centers. ​​