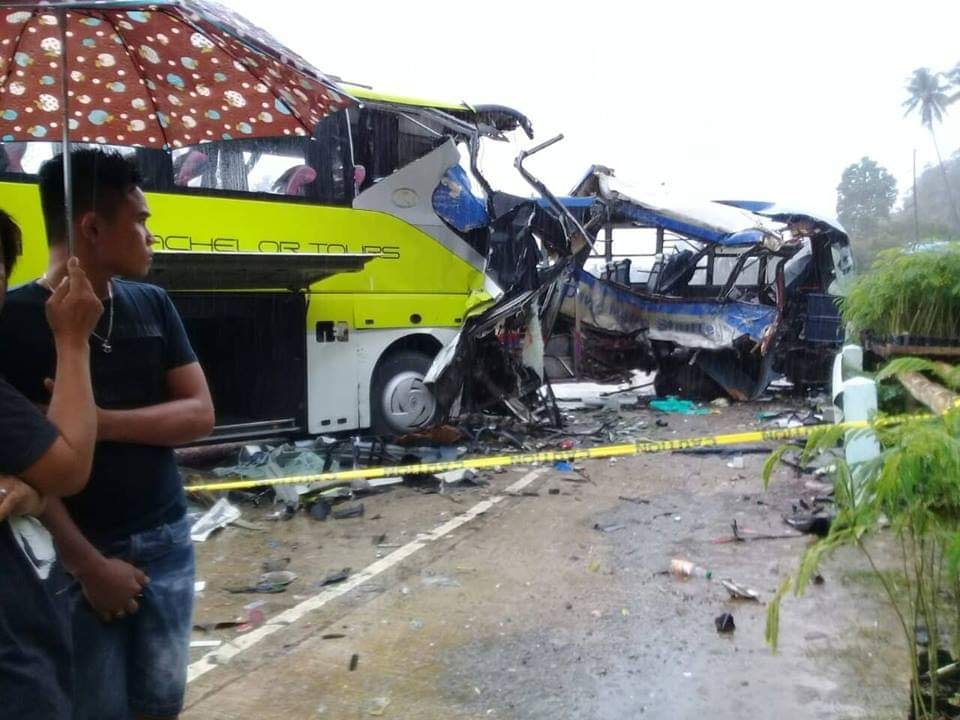 Seven individuals were killed while 30 others were wounded during the accident involving two buses along Km. 92, Barangay Magsaysay, Nabunturan town in Compostela Valley province on Monday afternoon. (Photo courtesy of Police Regional Office 11)

DAVAO CITY, Philippines – The Land Transportation Franchising and Regulatory Board in Davao Region (LTFRB-11) has issued a preventive suspension order on the Davao Metro Shuttle Bus Company over the road mishap in Nabunturan town, Compostela Valley on Monday, February 4 that killed seven and injured 30 other passengers.

The LTFRB suspension order dated February 4 has suspended Davao Metro Shuttle’s 34 buses for 30 days pending the inspection of its buses for roadworthiness.

According to the agency’s preliminary investigation, the public utility bus with plate no. LXA-731 owned by Davao Metro Shuttle was “at fault” for traveling despite having issues with its tire.

“The subject vehicle is at fault as not being roadworthy after its right front tire exploded causing it to encroach the opposite lane traversed by Bachelor Express Bus, resulting to a head-on collision,” read the show cause order issued by the LTFRB-11.

The said bus also violated its franchise for it is only authorized to travel from Davao City to Tagum City and vice versa. The Metro shuttle bus was bound to Veruella, Agusan del Sur while the Bachelor Express Bus was bound to Davao City.

Seven individuals were killed while 30 others were wounded during the accident along Km. 92, Barangay Magsaysay, Nabunturan town in Compostela Valley province on Monday afternoon.

The bus company was told to explain within 72 hours after its receipt of the order why its buses should not be suspended.

Failure to comply with the show-cause order means that the company has waived its right to explain its side, the order added. (davaotoday.com)