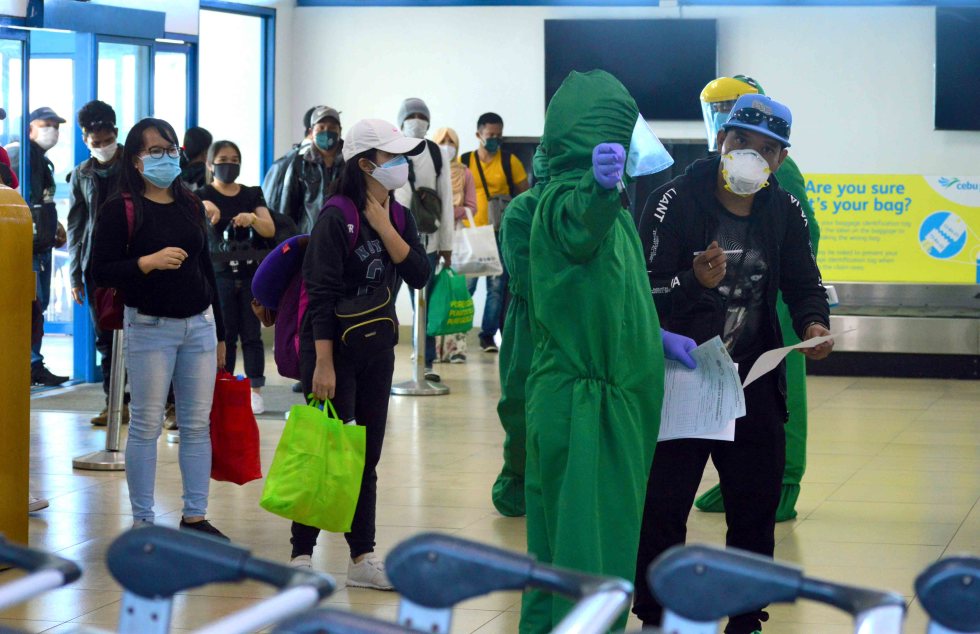 Overseas Filipino workers are being checked upon arriving at the Laguindingan Airport in Laguindingan, Misamis Oriental before going to their respective hometowns in Mindanao on Monday (May 26). (Jigger J. Jerusalem/davaotoday.com)

CAGAYAN DE ORO CITY, Philippines – Three hundred thirty-three overseas Filipino workers (OFWs) stranded in Luzon as a result of the imposition of the lockdown arrived via “sweeper flights” Monday, May 25.

Two flights brought in the workers at the Laguindingan Airport in Misamis Oriental, the Civil Aviation Authority of the Philippines (CAAP) in the region. These are the Air Asia Airbus A320 that brought 155 OFWs landed at 3:30 p.m., while the other flight ferried 178 workers arrived at 10 p.m.

The passengers had their temperatures checked and went through sanitation before stepping into the airport terminal, and none of them showed symptoms, said CAAP Regional Manager Job de Jesus.

De Jesus said the OFWs had been cleared by health personnel at the Ninoy Aquino International Airport before boarding their flights.

Bergado said that returning OFWs have gone through the required 14-day quarantine while staying in Manila and were already tested for coronavirus.

“They have with them their RT-PCR test results and they have already complied with the quarantine procedure,” she said.

She said 29 OFWs from the city and 35 from Misamis Oriental were turned over to their respective local government authorities, with transportation provided to fetch them.

OFWs in Northern Mindanao have availed of the government’s aid program for migrant workers displaced by the pandemic, said Bergado, who said they have now shelled out P 16 million for these workers.

But Bergardo said the OFWs who live outside the region have to stay in Cagayan de Oro, saying is up to the local governments to decide how to bring these OFWs home. This poses a challenge on how to cross through regional borders despite the lifting of the enhanced quarantine.

Happy to be home

But the workers are still happy to be near Mindanao. One of them is Martin Visabella, Jr, 47 from Dipolog City, who was sent home from California since March 16.

Visabella worked as a hotel crew of a cruise ship, based in San Francisco, United States, but he was ordered to return home when the pandemic started worldwide.

He recounted that he and other OFWs stayed at the New Clark City Athletes Village in Capas, Tarlac for two weeks, and underwent another 14-day quarantine when they arrived in Metro Manila.

“It was very strict. We just stayed in our rooms, but we followed the rules,” he said.

“I stayed in Luzon for more than two months. I am very happy to be with my family finally,” he said.

More migrant workers from are expected to arrive in the region’s ports before proceeding to their destinations in other parts of Mindanao until Wednesday, May 27. (davaotoday.com)