49 of 400 political prisoners released so far 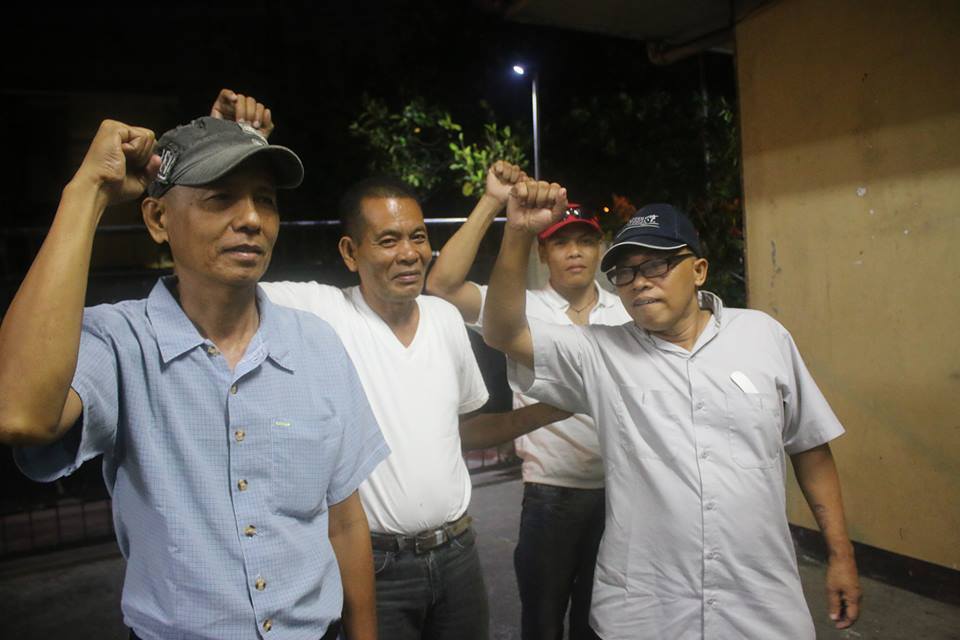 The National Democratic Front of the Philippines’ Reciprocal Working Committee on Socioeconomic Reforms (NDFP RWC-SER) lauded the move to release the prisoners, most of whom were imprisoned for more than 10 years.

The NDFP previously said 20 of the political prisoners were freed based on the merits of their case while 19 were in consideration of the Joint Agreement on Safety and Immunity Guarantees. Among these were four convicted rebels who were given pardon in December and 18 NDF consultants who were ordered release in July last year as part of confidence building measures prior to the resumption of the peace talks.

“This is a step in the right direction, despite being quite partial and belated, and should immediately be followed up with the soonest release of more than 400 other political prisoners, some of whom have long been imprisoned,” said Alan Jazmines, vice chairperson of the NDFP Reciprocal Working Committee on Socioeconomic Reforms.

The release of the political prisoners came days after government chief negotiator Silvestre Bello III announced the resumption of the talks in August. The fifth round of talks last May was cancelled after the government refused to participate, citing lack of conducive environment as a reason.

Bello said the latest batch of releases “is in accord with the process that will eventually lead to a general amnesty proclamation once we reach a final peace agreement with the communist rebels.”

Bello added that they are working on the releases of the sick, elderly, those who have long been detained and the women as the talk progress.

Antalan is also covered by the JASIG.

Bello said two other JASIG-covered NDF consultants – Eduardo Sarmiento and Leopoldo Caluza, were not yet released pending completion of their court documents.

More than 10 years in prison

The 10 political prisoners who were recently released were convicted and serving sentences at the New Bilibid Prisons in Muntinlupa for common crimes ranging from illegal possession of firearms and explosives to homicide and murder. But, the NDF listed them as political offenders arrested and convicted on trumped up charges.

Most of them were convicted for more than 10 years.

Jazmines said many of them are also farmers “who were imprisoned just because of their struggle for land.”

“They attest to the fact that the demand for genuine land reform, a priority in the ongoing talks on socio-economic reforms, has been a long-standing demand the mass of our farmers will continue to stand up and fight for,” Jazmines said.

Jazmines said Matricio is a member of the Kilusang MAgbubukid ng Pilipinas and was among the “Mamburao 6”, a group of farmers who resisted the land-grabbing in Mamburao, Mindoro Occidental.

“At the press conference held by the newly-released political prisoners, Matricio declared his staunch support for the continuation of the peace talks and the forging of a comprehensive socio-economic agreement that would include a genuine land reform program,” Jazmines added.

He said the struggle for land reform of the political prisoners show that the talks should continue.

Jazmines said they hope to bring to the table “the very basic demand for genuine land reform and other proposals for socio-economic reforms” once the talks resume. “We expect that, this time around, substantial gains for the benefit of the Filipino people will be achieved,” he added.

Atty. Angela Librado-Trinidad, GRP supervising panel member who oversees the JASIG implementation and releases of detained rebels, said there were 15 political prisoners who were included in the original resolutions of the Presidential Committee on Bail, Recognizance and Parole and pursuant to Jasig.

Librado-Trinidad also said the release of the 10 prisoners was pursuant to the GRP-NDF statements during 3rd and 4th round of talks held in Rome, Italy and in The Netherlands respectively.

Three other NDFP-listed prisoners included on the list of those who are for release, namely Raul Villar, Armando Vidar and Juanito Itaas.

The GRP peace panel said, Itaas, along with Donato Continente, “was convicted for the murder of Col. James Rowe, an official of the Joint US Military Assistance Group (Jusmag) in April 1989 in Quezon City.”

“He was allegedly a hitman of the Alex Boncayao Brigade, the erstwhile urban hit squad of the New People’s Army,” the GRP said in a press release posted on the website of the Office of the Presidential Adviser on the Peace Process last Sunday, July 9.

The peace negotiations between the Philippine government and the NDF resumed in August last year in Oslo, Norway. (davaotoday.com)