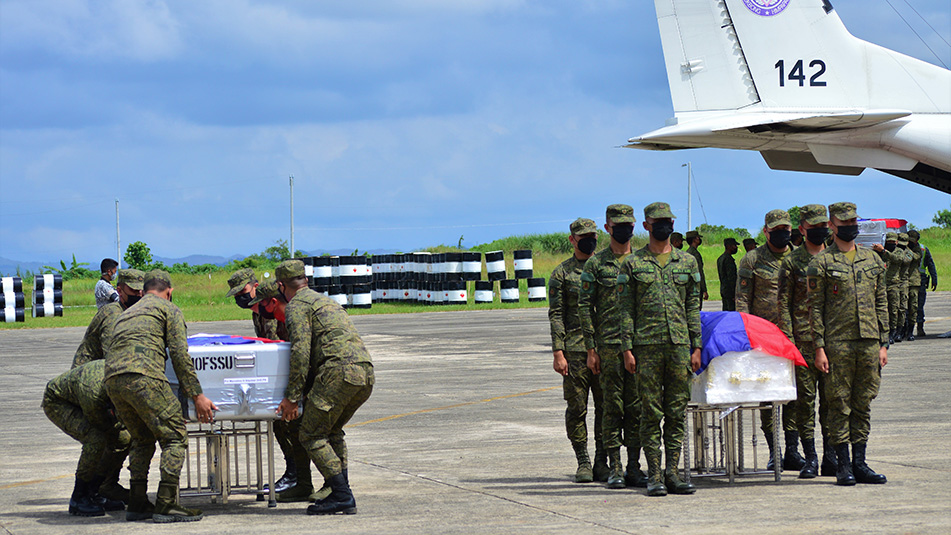 HOMECOMING. The first batch of the remains of soldiers from Northern Mindanao and Caraga regions who perished in the crash of the C-130 military cargo plane in Sulu arrived at the Lumbia Airport, in Brgy Lumbia, Cagayan de Oro City on Wednesday, July 7 where they received traditional military honors. (Jigger J. Jerusalem/davaotoday.com)

CAGAYAN DE ORO CITY – The first batch of remains of soldiers from Northern Mindanao and Caraga regions who perished in the crash of the C-130 military cargo plane in Sulu on July 4 arrived here Wednesday morning, July 7.

The bodies, contained in metal caskets, were being carried by soldiers as the 4ID band played the funeral march for their departed colleagues. The caskets were lined up at the airfield’s runway where top officials from the Army, police and Philippine Air Force gave a salute to each of the casket.

The caskets were then ferried to the 4ID mortuary at Camp Evangelista, Barangay Patag, this city, and the bodies transferred to flag-draped coffins which were later brought to the camp’s gymnasium where the families and loved ones were waiting.

He said there are 19 soldiers from Northern Mindanao and Caraga who perished in the ill-fated flight and the authorities are still determining the identities of the remaining bodies.

After the transport of the six remains, Garello said they are not yet certain with the next arrival of the remaining bodies.

Dreamed to join the army

Asuncion Bacolbacol, the stepmother of Alquisar, said their last conversation with Alquisar was on Saturday, a few hours before the soldiers’ scheduled flight to Sulu.

“He was telling me that they were getting ready to go on Saturday, but their flight was moved to Sunday as the C-130 had some malfunction. I have not heard from him since. The next thing we knew, the tragedy happened,” she said.

Bacolbacol said it was Alquisar’s dream to become a soldier and he willingly took his chances and on third attempt, he finally got enlisted to the Army.

“He really achieved his dream of becoming a soldier, but it was just so sad that he died,” she added.

As of July 7, the death toll rose to 52 including three civilians, a grandmother and two male siblings, who live in the vicinity of the crash site.

The black box was found and sent to the U.S. as part of the investigation procedures.

The C-130 bearing the number 5125 had been described the “work horse’’ of the Armed Forces as it transported logistics, personnel and COVID-19 vaccines in the country’s pandemic response.

When it deplaned at Lumbia Airport, the new army graduates fresh from their training at the 403rd Infantry Brigade, Camp Osito D. Bahian in Malaybalay City and whose first tour of duty was Sulu took the flight.