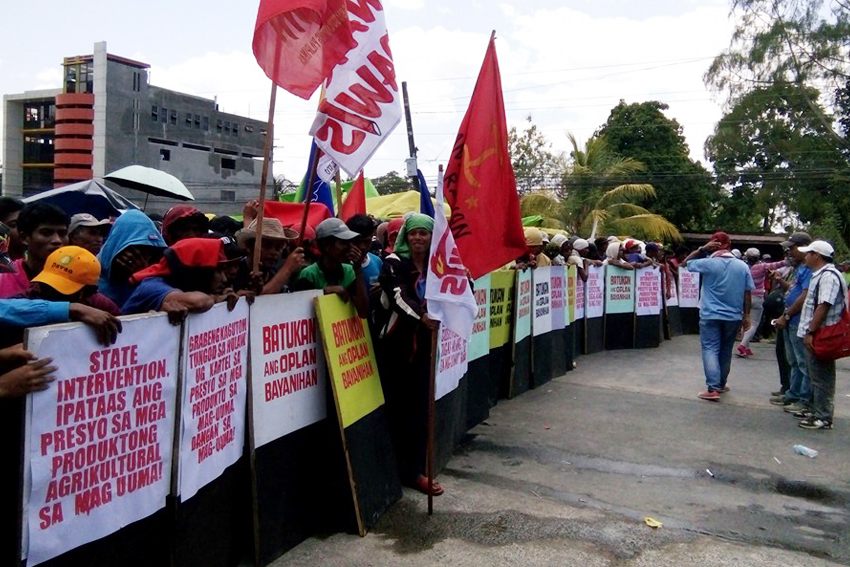 WHERE’S THE RICE? Around 6,000 farmers protest along Davao-Cotabato national highway in Kidapawan City in 2016 to demand for rice assistance as they suffer the impact of prolonged drought in the province. This photo was taken two days before the violent dispersal on April 1, 2016. (File photo/davaotoday.com)

ARAKAN, N. COTABATO, Philippines – “The drought in 2016 lasted for six months before we experienced its drastic effect. But now, only three months have passed but the damage caused by the drought this time is at par compared three years ago.”

This was how Cecilio Carmelo described the situation of farmers in Arakan, North Cotabato as the El Niño phenomenon continue to destroy crops by turning fertile farmlands into barren grounds.

Carmelo is the chairperson of MAILUMINADO Farmers Association, Inc. (MAFAI) and a resident of Barangay Duluruman in Arakan town.

He reminisces how, at the middle of the long dry spell in 2016, the more than 6,000 hungry farmers from his place, neighboring towns and villages went down to the province’s capital in Kidapawan City to ask for food and assistance.

Unfortunately, on April 1 that year, no food and assistance arrived but battle-ready police and military forces, who, after days of negotiations, were ordered by top officials in the province to disperse the farmers.

That was a bloody dispersal, Carmelo recalled, as the police and military open-fired at the hungry farmers.

Hundreds of farmers were also injured while 80 others were illegally arrested and detained by the police.

Three years have passed but justice remained elusive for the farmers. Not a single individual was held accountable to that gory dispersal.

Regrettably, drought is again sweeping the farmlands in North Cotabato and devastating the lives of the same farmers who were once dispersed violently by those in power.

Carmelo observed that authorities have not learned any lesson from the 2016 incident.

“Whether the state of calamity is declared or not, the effects of the drought to the poor farmers are evident. They should address this crisis immediately. The residents are in dire need of food assistance,” he asserted.

Close to 72,000 families or 360,000 individuals are now affected by drought in five municipalities in North Cotabato.

With the recommendation of the Provincial Disaster Risk Reduction and Management Office (PDRRMO), top officials placed North Cotabato under the state of calamity.

Damage to agriculture has reached millions or PHP714,384,509.06, to be exact, as of March 20, the Cotabato Provincial Agriculture Office said.

Carmelo said farmers in their area used to harvest 30 to 40 sacks per hectare before the dry spell struck, before.

“Now, a farmer is lucky if he is able to salvage three to five sacks of rice,” he emphasized.

Davao Today visited Barangay Malibatuan in Arakan where the family of Sulang resides. Darwin and his father Ebao joined the 2016 protest in Kidapawan City. When they left their abode, they were full of hope the government would provide them assistance, especially food. Only Ebao went home alive after days of protest and negotiations in Kidapawan City. The police shot and killed Darwin.

The majority of the farmlands in Malibatuan are now parched, the once fertile rice fields are now barren.

Another Malibatuan resident is Lolita Lanse, a survivor of the 2016 carnage in Kidapawan City.

“Farmers in Malibatuan were left with no choice but to join the protest back then in Kidapawan City. After six months of no rain and no food to eat, residents did not receive any food aid from the authorities,” Lolita recalls.

She added, “We had no other intention but to conduct a peaceful protest and demand for food assistance. We were on our way to the warehouse of the National Food Authority. On that warehouse, thousands of sacks of rice were stored, while thousands of farmers continue to suffer from hunger in the countryside. But the government failed to answer our demand for food as the police and military forces blocked us. We were forced to hold a barricade.”

Lolita said they went down to Kidapawan City peacefully, with no intent to cause violent disturbances, but the police started the brutal dispersal and fired their weapons to the farmers.

Until now, Lolita cannot recall how she survived the incident, as she lamented, “we were asking for food, but they gave us bullets.”

It was only after the carnage that the farmers received food and support, including sympathies, mostly from the private sector, non-government organizations (NGOs), celebrities, and the international community, especially when the social media campaign #BigasHindiBala went viral.

Three years after that fateful day in 2016, Lolita and other survivors are still taking the toll for the government’s lack of support in the middle of the onslaught of El Niño.

Lolita said a number of farmers are fortunate enough they were able to survive the dry spell because of the construction of a mini dam and irrigation system. These farmers have their crops watered and survive the drought. But they are only a few compared to the majority of farmers who have no access to the irrigation system, especially those in the upland areas who only rely on rain.

“We heard from the radio that the local government of Arakan has not yet submitted a report to the provincial government on the effects of the calamity. This is the reason why most of the residents here have not yet received any aid from the government since the drought started. We desperately need help now,” Lolita lamented. 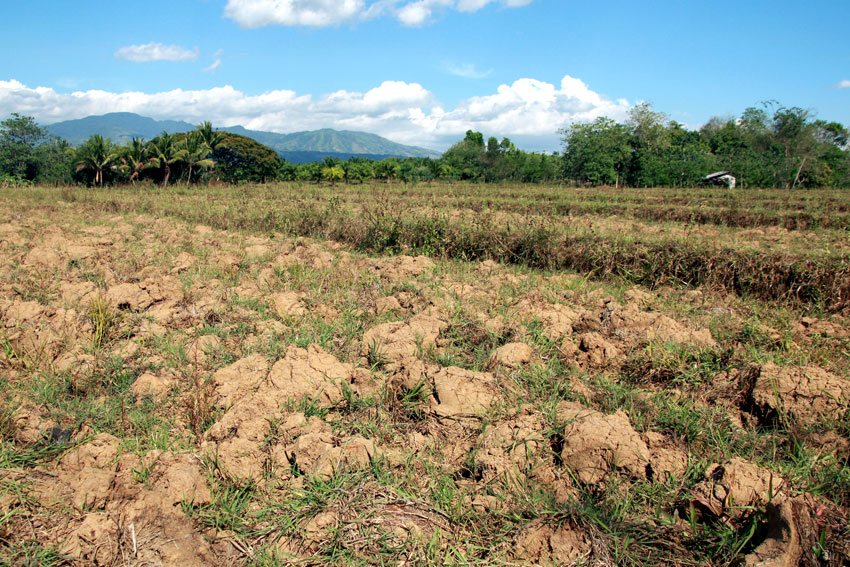 For her, instead of spending millions for cloud seeding operations, the local government should prioritize the distribution of food relief as an immediate response to the crisis.

Joint cloud seeding operations in Region 11 and 12 are also expected to start within this week, according to the Department of Agriculture (DA), with a budget of 2.5 million pesos to lessen the impact of the dry spell.

Lolita said cloud seeding is inefficient since the induced rain will only last for a while and could only wet the surface area of their lands. It will only cause further damage to their crops.

“What we need is direct help from the national (government). According to (Department of Agriculture) Sec. (Emmanuel) Piñol, there is no rice shortage in the country. Where is the rice [subsidy]? Then we heard from the news that unconsumed sacks of rice were just left rotten last year while residents in remote provinces experience hunger. We need food subsidies until we can resume farming our lands,” she demanded.

The farmers’ peril might worsen as the Philippine Atmospheric, Geophysical, and Astronomical Services (PAGASA) earlier reported that the El Niño may cause warmer and drier condition nationwide this month.

El Niño is expected to last until June, the state weather bureau added.

When asked if they would resort to protest if the condition worsens, Lolita said many farmers are now afraid to air their grievances after President Rodrigo Duterte declared martial law in Mindanao.

(The government fully utilizes its armed forces. If people would go out to air their true grievances and ask for food because of hunger, they will be labeled as NPAs or New People’s Army rebels.)

(To whom shall we ask for? Where shall we go? No more, there is nowhere for us to go.)

Meanwhile, Anakpawis Rep. Ariel Casilao slammed the administration of President Duterte for its failure to bring justice to the victims of Kidapawan carnage adding it only “sowed terror” in peasant communities as killings of farmer leaders continue.

“The situation is still the same, Filipino peasants across the country are now suffering due to the intense drought, but government action is limited to press work, combined with the incessant peasant killings, with the latest is the mass killing in Negros Oriental,” Casilao said.

He criticized that justice for victims of Kidapawan carnage is evidently impossible under the present administration.

“Filipino peasants in the country are demanding genuine agrarian reform and responsive action during calamities. They cry for ‘Land and Food,’ but face reprisals of peasant killings, thus, the call evolves to ‘Land, Food and Justice,'” Casilao added. (davaotoday.com)