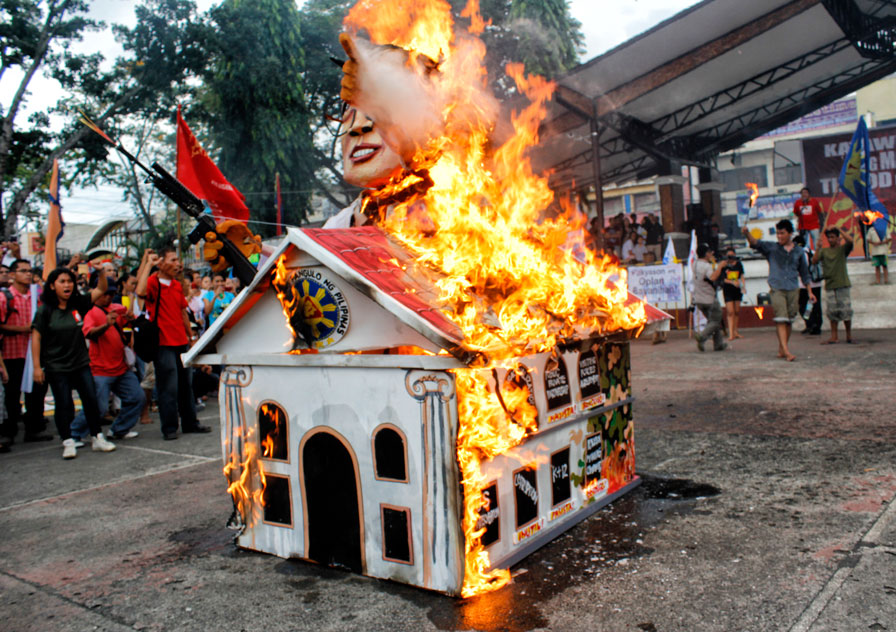 In a protest rally during the President’s State of the Nation Address in 2013, rallyists in Davao City burned effigies of the Malacañan Palace and then President Benigno Aquino III. This year, protesters said there will be no burning of effigies on the first SONA of President Rodrigo Duterte. (davaotoday.com file photo)

DAVAO CITY — A former partylist lawmaker who has attended protest rallies during the State of the Nation Address of the past Philippine presidents since 1998 said the rally on the first SONA of President Rodrigo Duterte this Monday, July 25 will be different.

“There will be no burning of effigies,” said Raymond Palatino, former Kabataan Partylist and now chairperson of Bagong Alyansang Makabayan in National Capital Region.

In an interview during a Mindanao peace forum held at the Brokenshire Hospital here on Friday, Palatino said instead of effigies, they are preparing for a mural that shows the people’s agenda for change.

During Duterte’s inauguration on June 30, progressive groups presented to the country’s 16th President their version of a “People’s Agenda for Change” inside Malacañan Palace, which is considered a rare occasion as militants were usually barred by the authorities to go near the Palace during their rallies.

Palatino told Davao Today that their organization will also prepare big banners with their concrete demands for change.

Regional delegates run up to at least 10,000 participants, 1/3 of them coming from Mindanao, Bicol at 5,000, Southern Tagalog and Central Luzon at 1,000 each and Northern Luzon with at least 500 participants.

He said the delegates want to present their agenda from their different regions to the new administration to “sustain the momentum, the demand for change.”

“Para ipakita na tuloy-tuloy namin itong ipaglalaban (To show that we will continue to fight for (change)),” he said.

He said they have “officially requested Malacañan” to hold the rally near the Batasang Pambansa complex.

During the meeting with the leaders of progressive groups in Malacañan, Duterte reportedly said that holding the rally near the Batasan complex “shouldn’t be a problem”.

Palatino said if they are allowed to hold the rally at the SB Bayan Park in front of the Batasan Complex, which is a freedom park, “there will be lesser traffic”.

“There will be no traffic in Commonwealth. No need to suspend classes, no need to re-route traffic,” he said.

“Yun naman ang source of traffic eh, hinaharangan nila kami sa main road (The source of the traffic is the blockade of the police against the rallyists in the main road),” he added.

Palatino said the delegation is set to reach Manila on Saturday, Jul 23. He said a program will be held in the Quezon Memorial Circle.

The protesters will be converging along Commonwealth Avenue. “Hopefully we can go near Batasan,” he said.

Palatino also said they “hope that there will be no barb wires, fire trucks and container trucks” to block them on Monday.