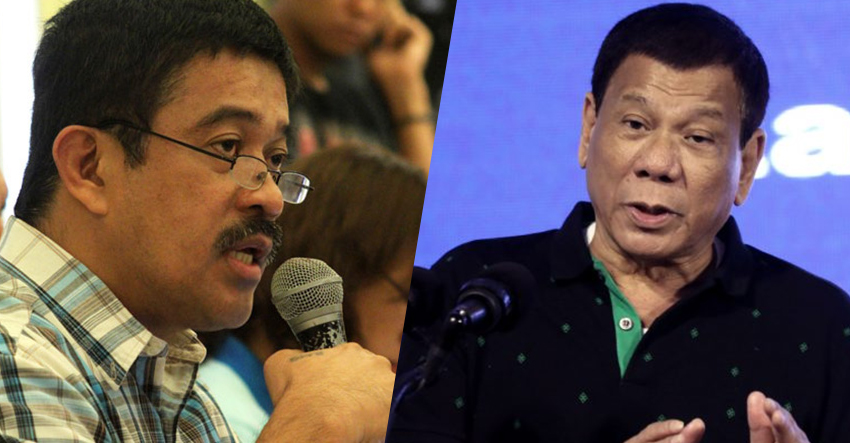 During a speech before troops in Marawi City on Wednesday, February 28, Duterte likened to “co-ownership” the possible joint exploration of the Philippines and China in the disputed sea.

Zarate said this statement sends a “dangerously wrong message” that the Duterte administration “disregards our hard won victory at the International Tribunal at the Law of the Sea (Itlos).”

The Tribunal ruling on the West Philippine Sea, issued on July 12, 2016, favored the Philippines, noting that China does not have historic rights to the disputed waters.

“It is as if the Duterte administration is reversing the said historic victory and is now giving the West Philippine Sea (WPS) to China on a silver platter,” Zarate said.

Worse, justifying the arrangement with China as co-ownership “can even be construed as a capitulation to China’s militarization program in the area,” Zarate added.

“Again, we are calling on the Supreme Court to finally issue a decision on our 10-year-old case to declare the Joint Marine Seismic Undertaking (JMSU) as unconstitutional. China used it then to get data and map our resources in the WPS so now we must not allow them to use the same modus operandi against us,” Zarate said.

The Director of the University of the Philippines Institute for Maritime Affairs and Law of the Sea and maritime expert Jay Batongbacal has also echoed Zarate’s concerns.

Batongbacal likened the President’s remarks as “close to conceding Ph exclusive rights and resources to a foreign power in violation of the Constitution.”

“The existing jurisprudence is, yes we can enter into joint exploration and joint exploitation with foreign entities provided that it complies with the Constitution among others, it be pursuant to a written agreement signed by the President and submitted to Congress,” he said in a Palace briefing.

Roque also sees this move as a “practical solution for the Filipinos to utilize natural resources without dealing with the contentious conflicting claims to territories.” (davaotoday.com)