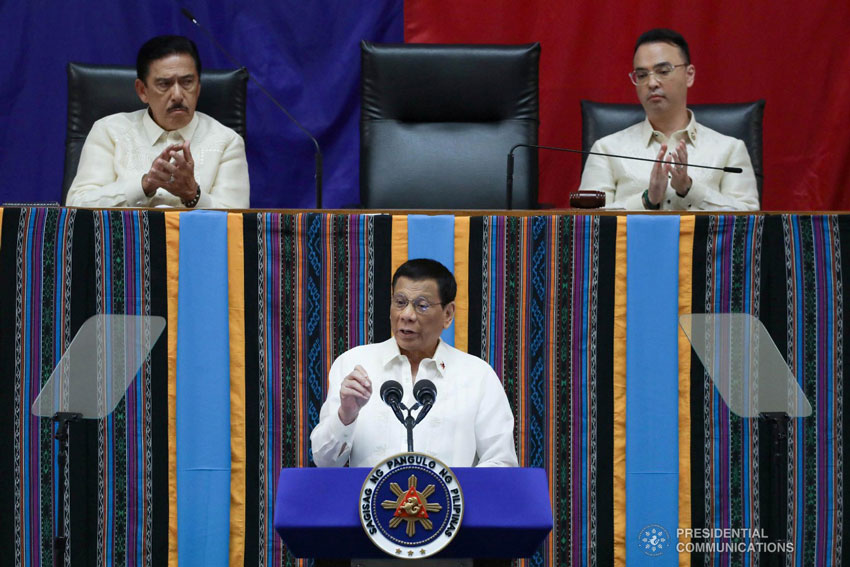 President Rodrigo Duterte delivers his fourth State of the Nation Address (SONA) at the House of Representatives in Quezon City on Monday, July 22, 2019. (Malacañang photo)

In Duterte’s fourth State of the Nation Address (SONA) on Monday, he urged the Congress to pass a “new version” of the Salary Standardization Law (SSL), to benefit government employees, including teachers.

“To the teachers who toil and work tirelessly to educate our young, what you have been asking for is included here. It may not be so big but it will tide you over,” Duterte said in a mix of English and Filipino.

But the Alliance of Concerned Teachers (ACT) in a statement, said that they find no comfort in Duterte’s announcement of a salary hike which is ‘a little bit bigger than before’.

“If anything, it raises further anxieties among teachers who are hardly making ends meet due to very low pay amid incessantly soaring prices, and who have waited restlessly over the last three years for the fulfilment of President Duterte’s promise to give due recognition to the value of our service and profession,” ACT reacted.

The group added that ‘a little bit bigger that before’ is best exemplified by the P588 pay hike for salary grade 1 employees proposed by Senator Bong Go. “Such an amount is an insult to our service and contribution to national development,” they said.

Rep. France Castro of ACT Teacher’s Party-list reechoed the dismay of teachers to another promise from Duterte, saying that it will not be enough to be a decent living wage.

“We are dismayed with the statements of President Duterte of stating another promise with the increase in salaries for teachers and all other government employees. ‘A little bit bigger’ is very far from the doubled salaries he gave to uniformed personnel. ‘A little bit bigger’ will not be enough for a decent living wage for teachers that shoulder the shortages in school facilities and materials,” Castro said.

On the 18th Congress, ACT Teachers refiled House Bill 219, which proposes P30,000 salary for teacher 1 and P16,000 for Salary Grade 1.
Castro said that teachers “will not expect much” to a salary hike only ‘a little bit bigger’ compared to previous increase, with the high prices of basic goods.

“A substantial increase will be able to feed the families of our teachers and government workers and can show commitment and love to teachers and other education workers as much love and commitment he gave to the police and military. Anything less will be no different than the former administration’s SSL, which only gave loose change for an increase to ease the anger of teachers, low and middle paid government employees,” Castro said.

The chief executive in January of last year has signed a joint resolution, raising the salary of military, police and other uniformed personnel. Under Joint Resolution 1, a fire or jail officer, police officer, private, and an apprentice seaman will have a P29,668 base pay.

Last month, the Malacañang told the teachers to “be patient” on their demand for wage hike, and that the government is currently looking for funding.

ACT said teachers will continue to demand for a “substantial” salary increase that they deserve. (davaotoday.com)