After Trump’s victory, Duterte says alliance with US remains 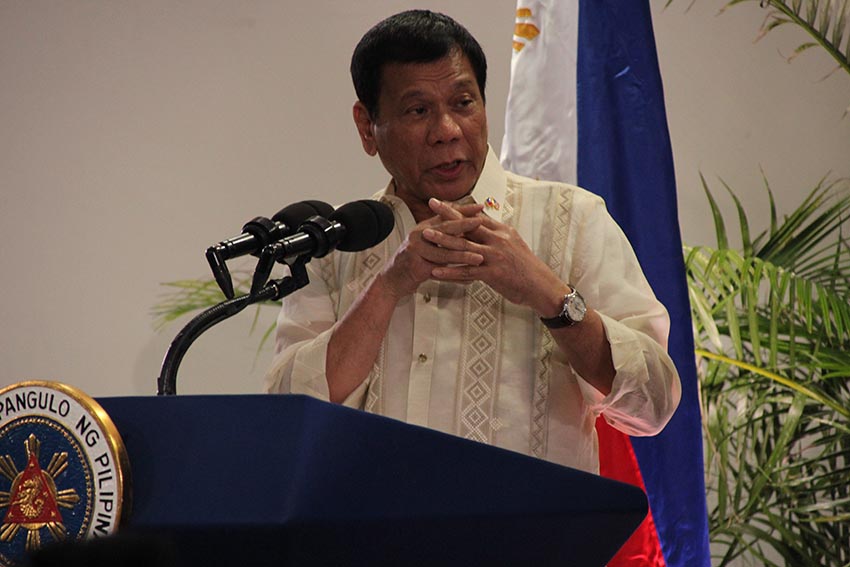 President Rodrigo Duterte says the alliance and friendship with the US will remain after. Duterte made the announcement after his arrival in Davao City from his official state visit to Thailand and Malaysia. (Paulo C. Rizal/davaotoday.com)

DAVAO CITY, Philippines — What will be the relationship of the Philippines and the US under President-elect Donald Trump?

President Rodrigo Duterte said that the alliance and friendly relations of the Philippines and the United States will remain.

“As is. We are friends with (US), an ally. We have an RP-US military pact that was 1954 I think, that could bind us in the matter of staying whether or not you side with this or that. But I do not foresee any war in the next 100 years,” Duterte said.

Duterte said the country will maintain cooperation and the treaties signed “will be honored”.

Speaking before reporters at a news conference upon his arrival from his official visit to Thailand and Malaysia early Friday morning, Duterte also confirmed that the Enhanced Defense Cooperation Agreement will continue.

Duterte said that even if he was vocal against it, the national defense has already firmed up the arrangements when he talked with Defense Secretary Delfin Lorenzana. He said he does not want to put the country in a bad light.

“By the time that I talked to Secretary of National Defense na-firm up na nila ang arrangement and I said I do not want na mapahiya ang Pilipinas,” he said.

“The president must understand that he just can’t flip-flop on issues concerning national sovereignty and independence. It’s the rights and welfare of the Filipino people that’s at stake here,” Elago said in a statement Thursday.

“And if he backtracks one more time, he may as well stop mentioning independent foreign policy,” Elago added.

She also warned President Duterte of seeking stronger ties with the US after congratulating Trump.

“Trump will likely push for the same neoliberal policies and would want to keep ties with the Philippines as they want to maintain the Philippines as market for their surplus goods. Trump would also want to maintain America’s posture as the number one country in the world militarily, so it’s not far-fetched to say that Trump’s warmongering could drag us into war,” she said.

But Duterte reiterated that he will pursue an independent foreign policy.

“I will pursue what I’ve started. I am not into the habit of reneging on my word,” Duterte said. He said the Philippines’ partnership with China and the rest of the countries in the Association of Southeast Asian Nation remains.

He also said wants it to be the last military exercise in the country.

Duterte said it is only the US who learns much from the military exercises.

“In every military exercise, it is always America who learns much, kokonti lang yung sa Pilipino kasi kanya man yung Palawan, anong i-training mo dyan? (The Filipinos will only learn a little because he already owns Palawan, what more do you need to train for?)” Duterte said.

Duterte also said the Filipino soldiers do not need someone to train them.

“By themselves, they are warriors and capable of conventional war,” he said.

In September, Duterte made remarks about ending military exercises between US troops and Filipino soldiers as a foreign policy. (davaotoday.com)