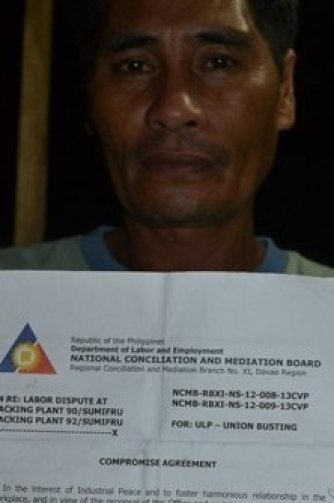 Namasufa union president Vicente Barrios shows the memorandum of agreement between Sumifru management, contract growers and union officials granting the return to work with back wages of 141 workers. (contributed photo)

Davao City –  A picket by banana workers in Compostela on Monday over unpaid back wages by a banana grower turned violent as the latter fired a warning shot and issued threats against them.

Nagkahiusang Mamumuo sa Suyapa (Namasufa) union president Vicente Barrios was leading a picket of some 100 workers at the residence of banana grower Jesus Jamero when the latter came out of his house carrying a gun.

In a factsheet sent to Davao Today by labor center Kilusang Mayo Uno, Barrios was starting his speech when Jamero reportedly  “brandished his .45 calibre gun, fired it once, and toted it at Barrios, holding him, saying ‘Bantay lang ka unya. Bantay lang ka unya. (You watch out!)’.”

Barrios was then whisked away by his co-workers as they feared for his life. KMU said Barrios once survived an ambush in 2006 with two co-workers during a labor dispute.

The incident was the latest in a series of obstacles faced by workers starting with their suspension by the multinational Sumifru banana firm last year. A labor arbitration ruled on mid-January that the suspension was illegal.

Some 141 union workers including Namasufa were reinstated and were given back wages for ten working days and a P1,000 signing bonus, as part of the memorandum of agreement signed between contractors including Jamero, Sumifru management and union leaders to follow the agreement.

But workers said Jamero did not follow the agreement to release the first tranche of payment for back wages last week. Each worker was expecting to receive P2,910.

The failure of payment prompted Namasufa to stage a rally in front of the house of Jamero in Barangay New Algeria, Compostela.

KMU Southern Mindanao spokesperson Basilio believed that politics may have also been involved as Jamero was a former barangay captain and head of banana growers federation.

Basilio said “the violence of Jamero as an agent of Sumifru is meant to terrorize the workers into silence and a flagrant attempt to undermine workers’ resistance and their recent victories against Sumifru.”

Sumifru Philippines is a multinational company engaged in sourcing and exporting Cavendish bananas, papaya and pineapple. Its investment in Mindanao began on 1970, and to date has plantations in three regions covering 14,000 hectares.

Basilio said they had filed this incident to the Center for Trade Union for Human Rights (CTUHR), a national multi-sectoral group advocating protection of workers from human rights violations and was among the groups which presented worker rights cases during the special visit of the United Nations’ International Labor Organization investigation in 2009. (Tyrone A. Velez/davaotoday.com)