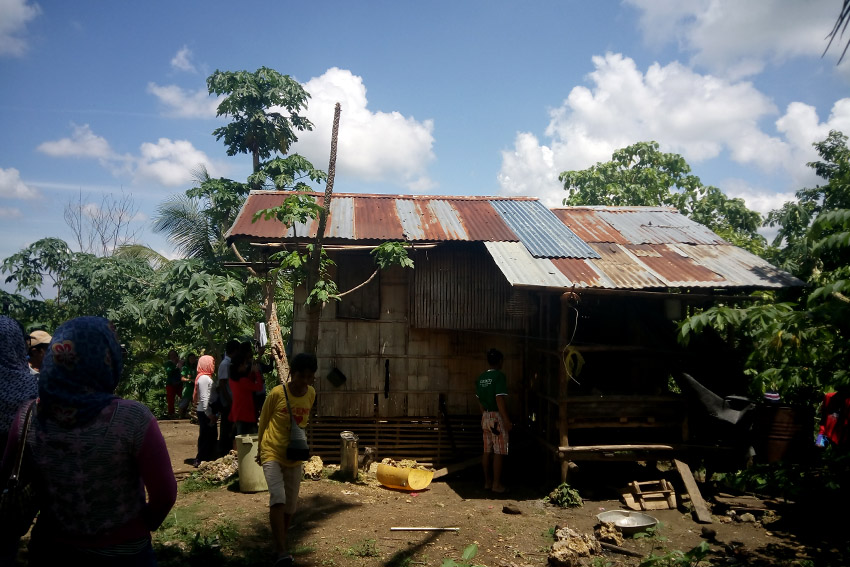 The house where two members of the family decide to take their rest before working as rubber tappers, least expecting a strafing incident to happen soon. (Earl O. Condeza/davaotoday.com)

DAVAO CITY – A military commander debunks the claims of the two survivors that the strafing incident in Laak, Compostela Valley is a planned massacre, saying that it was a legitimate encounter with the rebel group New People’s Army.

In a statement, Col. Ricardo Nepomuceno of the 1003rd Infantry Brigade, said that the incident at Sitio Cebole, Kapatagan, Laak, Compostela Valley Province, “is a legitimate encounter” between NPA who they said are members of the Guerilla Front 33, Southern Mindanao Regional Command and the Charlie Company of the 60th Infantry Battalion (60IB).

“The army troopers were patrolling the area when the first fire was shot towards their direction from an undetermined number of armed men seen skulking at least 50 meters away from Rosquite’s house,” the statement said.

“This prompted the operating troops to retaliate and fire back against their armed aggressors. The crossfire lasted for about 15 minutes before said aggressors, who have sought refuge in Rosquite’s house, scampered away from the encounter site,” the statement added.

But for the survivors of the incident, they were only in the house during that time when it happened on 4:30 am of June 2, Thursday

Aladin Rosquites, one of the survivors said the incident, is a massacre.

“Massacre jud to, kay gidiritso man nila og ratrat ang balay. (It was a massacre, they directly open fired at our house).” he said

“It was not raid, nor legitimate encounter because we are civilians,” he added.

Contrary to survivor’s testimonies, 60th Infantry Battalion Commander Lt. Col. Emmanuel Canilla said that it was a legitimate encounter and what their troops did was”legal and is satisfactory of expected military actions in these kinds of circumstances,” Canilla said.

“Massacring people, even those who are considered outlaws or state enemies, is not the thrust of the Philippine Army,” Canilla added.

“We take particular care in the observance of rules governing the involvement of civilians in the hostilities,” the commander said.

Canilla challenged the support groups to instead of resorting to “information harassment” or “black propaganda”, they should seek to file legal charges against the policemen or soldiers “who acts unlawfully” and said that the military will be “fully cooperative” for such actions.

The said support groups, together with the Rosquites family filed blotter at the Barangay Hall of Kapatagan on July 2, Thursday and to the Municipal Police on June 4, Saturday. (davaotoday.com)

Davao to give tax reliefs for businesses affected by COVID-19