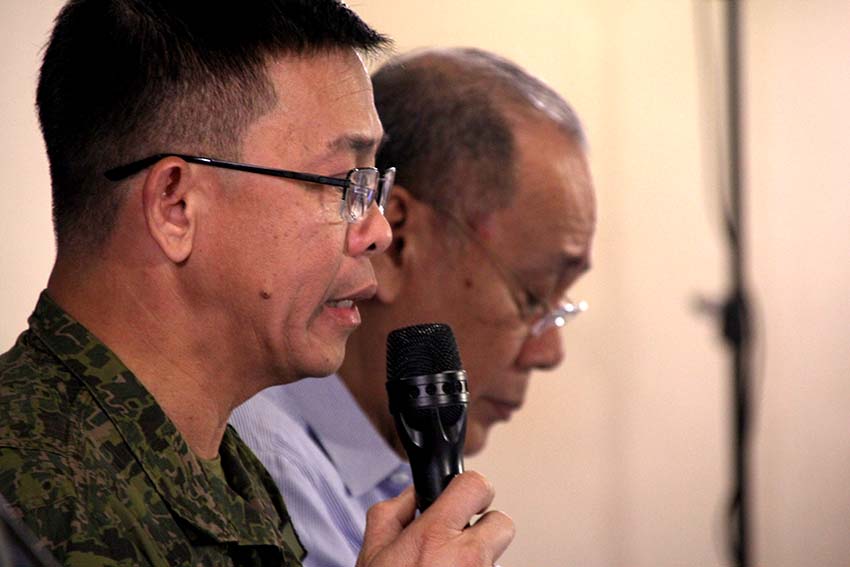 NO BOMBS. Designated spokesperson for the implementation of Martial Law, Brigadier General Restituto Padilla says they are extra careful not to bomb Marawi City to avoid further collateral damage. Padilla says they are merely making “surgical airstrikes” against the Maute group in a press conference on Friday, May 26 at a hotel in Davao City. (Paulo C. Rizal/davaotoday.com)

DAVAO CITY, Philippines — Not bombing, but “surgical airstrikes with pinpoint accuracy” was how Armed Forces of the Philippines spokesperson Brigadier General Restituto Padilla described their operations against terrorist group Maute in Marawi City.

Padilla, who is also the designated spokesperson for the implementation of martial law in Mindanao, said they are taking every precaution “not to bomb” Marawi, in order to save the locals’ hard earned possessions.

“Again, the assurance that we give you is that we are taking every precaution to avoid collateral damage, damage to private property which you have heavily invested on your whole lives, as well as the loss of innocent lives,” Padilla said in a press briefing in a big hotel here.

Padilla reported that as of press time, the Army had already lost 11 personnel. Two police men had also died, with one allegedly killed by way of beheading.

Meanwhile, some 39 personnel were currently wounded.

“Up to this moment, operations are ongoing and there are still firefights between our forces and those of the terrorists in certain parts of the city. But the objective of our Armed Forces is to clear the city at the soonest time possible,” Padilla said.

Thousands have already evacuated the city, with most of them fleeing to nearby Iligan City and other towns in Lanao del Sur.

The series of clashes between government troops and the Maute group on Tuesday evening, triggered President Rodrigo Duterte’s declaration of Martial Law in Mindanao.

Duterte signed the Proclamation No. 216 which placed the entire island of Mindanao in a state of Marial Law and the suspension of the Writ of Habeas Corpus in Russia hours after the gun battles erupted. (davaotoday.com)