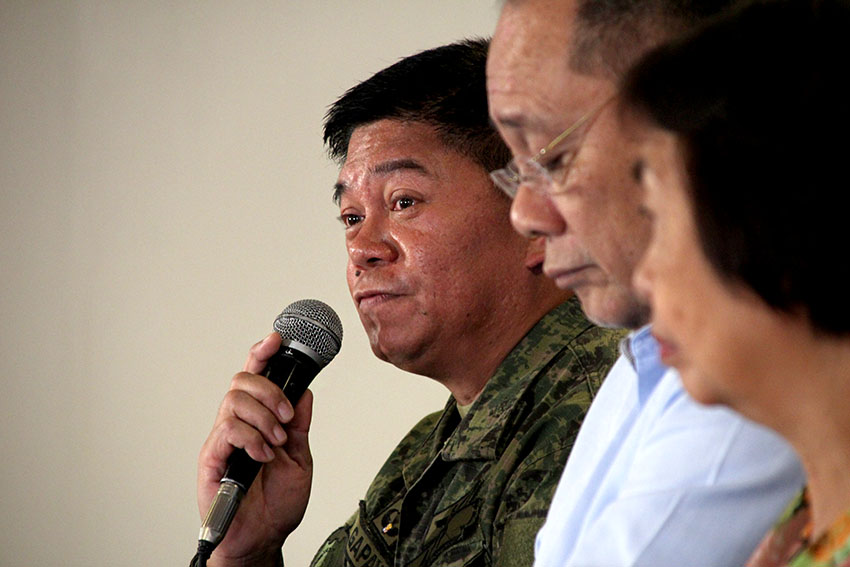 DAVAO CITY, Philippines — With the capture of leading personalities in the Maute Group, Eastern Mindanao Command Deputy Spokesperson Brig. Gen. Gilbert Gapay said there will be more arrests as the army turns more “aggressive and proactive” in hunting those wanted by the government in relation to the Marawi siege.

On Thursday’s Mindanao Hour, Gapay said the arrest of Cayamora Maute was the result of the vigilance of both the military and the police in manning their checkpoints.

Cayamora and four other companions were apprehended on Tuesday while entering Davao City through the Sirawan, Toril checkpoint.

Cayamora, his second wife Kongan, daughter Norhana, and son-in-law Benzarali Tingao were all charged of illegal possession of firearms and explosives after a .45 caliber pistol and one hand grenade was found in the black Toyota Hiace Grandia van that they were riding.

Cayamora and Norhana were both included in the first arrest order list signed by Defense Secretary Delfin Lorenzana.

Cayamora also has standing warrants of arrest for five counts of kidnapping and illegal detention, while Norhana is also wanted for violation of Presidential Decree 1866 for illegal possession of blasting caps and other incendiary devices.

The said order was issued by the Regional Trial Court 12 Branch 11 in Malabag, Lanao del Sur.

The driver, Esmael Aljon Salazar, was released on Wednesday night. Gapay said they found no probable cause to link Salazar with the Mautes, and have concluded that the driver and the van were hired for transporting Cayamora and his companions.

Former Marawi City Mayor Fajad Salic who is wanted for rebellion, meanwhile, was arrested in Misamis Oriental on Wednesday evening. Salic was reportedly linked to the Mautes.

Gapay said Salic was arrested through a “joint AFP and PNP check point operations (sic).” He was arrested along with three other companions.

Gapay revealed that they have conducted a total of 2,651 checkpoint operations. This includes both static and random mobile checkpoints. A total of 1,082 security patrols were also conducted since the Martial Law declaration. (davaotoday.com)