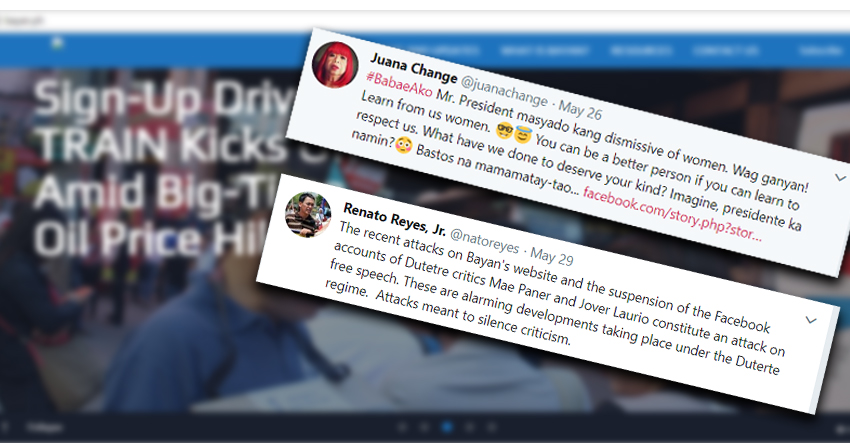 DAVAO CITY, Philippines — The group Bagong Alyansang Makabayan (Bayan) has expressed alarm over the cyber attacks launched against online accounts and sites critical of the administration of President Rodrigo Duterte.

“The recent attacks on Bayan’s website and the suspension of the Facebook accounts of Duterte critics Mae Paner and Jover Laurio constitute an attack on free speech,” the group said in a statement issued on Wednesday.

The group considered the recent assaults as alarming and are meant to silence critics of the Duterte regime.

Bayan on Monday reported that its website www.bayan.ph was subjected to cyber attacks after the launching of its drive against the Tax Reform for Acceleration and Inclusion (TRAIN) law.

The group said the malicious script injection attack originated from the country and the second time that the website is subjected to coordinated attack.

“We suspect that the Dutetre regime and its online hacks are behind the attack. It is a desperate and futile attempt to derail the growing opposition to the TRAIN Law and the Dutetre regime’s inaction,” Bayan said.

The group added: “The attacks were done through bots, forcing our website to crash. We also detected attempts at malicious script injection from the hackers. We have no doubt that the attacks are the handiwork of the online dirty tricks department of the Duterte regime.”

Bayan also expressed deep concern over the suspension of the Facebook accounts of Paner and Laurio.

The suspensions came after spurious reports questioned the authenticity of their accounts and identities.

“For several days, Paner and Laurio lost control of their accounts. This trend of attacking sites and accounts critical of the regime is indeed alarming and is another act of tyranny under Duterte,” Bayan said.

Paner, an activist-comedian also known as Juana Change is a critic of the administration of Duterte.

The account was reactivated the next day, she reported.

In her twitter, Laurio said trolls have created a fake account under her name and mass reported the same to appear that she was pretending to be somebody else.

Laurio is also known for her criticism of the administration of Duterte and was subjected to social media harassments and attacks.

Amidst the series of cyber attacks, Bayan has called on freedom-loving Filipinos “to continue speaking out and condemn all attempts to suppress free speech,” as the group vowed to continue to post, publish and air their views more aggressively. (davaotoday.com)