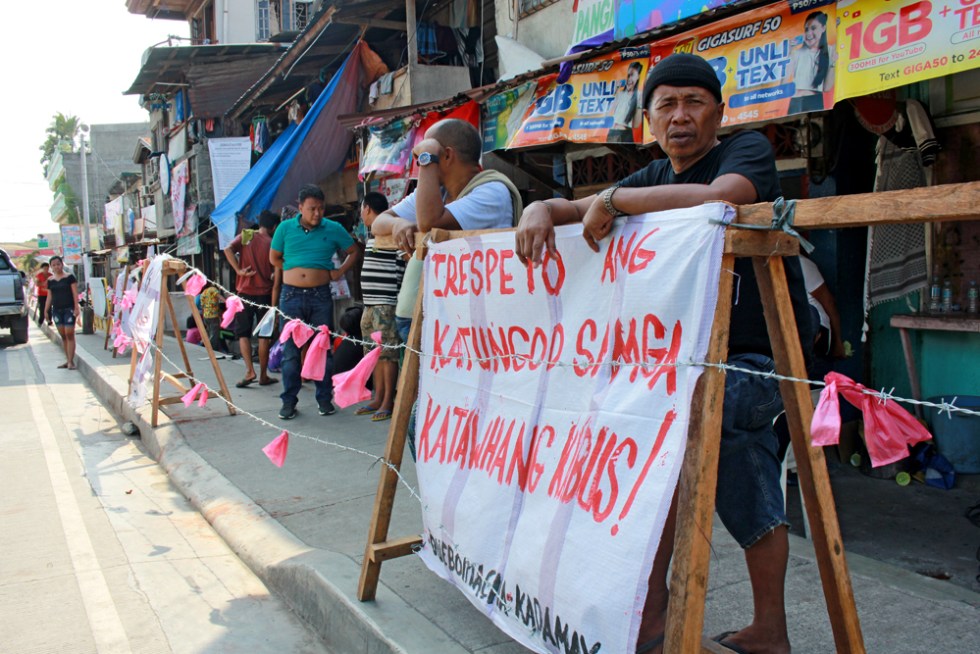 BARRICADE VS DEMOLITION. The Muslim-Christian community of Barangay 26-C Salmonan in Davao City set up barricades at the entrance of their community to defend their homes against demolition threat on Tuesday, April 3, 2018. At least 67 households, some have occupied the area for 60 years, fear to lose their homes as court favored a businessman who claimed the 3,515 sq m land area in 2011. (Contributed photo by Bern Pormento)

DAVAO CITY, Philippines — As the Holy Month of Ramadan is fast approaching, Moro residents of the contested land in Barangay 26-C Salmonan here appealed to President Rodrigo Duterte to halt the demolition.

This was articulated by some leaders of the Muslim-Christian community of Salmonan in a dialogue with the Presidential Commission for the Urban Poor (PCUP) Commissioner Norman Baloro and other government agencies here on Tuesday, April 24.

“We appeal to hold the demolition for humanitarian consideration while we wait for the response from the national government regarding our request,” said Virgie Gonzales, acting chairperson of the Quezon Boulevard-Lizada-Juan Luna Home Owners Association.

READ: Oldest Masjid in Davao may vanish due to demolition

According to Gonzales, they already sent a letter directly to the office of President Rodrigo Duterte last year requesting his intervention on the land dispute.

Abdul Agor, one of the community’s Imams, appealed to the officials during the dialogue to conduct the demolition after the Holy Week of Ramadan which is expected to start on May 15 or 16.

“It will be Ramadan in two weeks, what would happen to us if we will be displaced?” lamented Agor.

However, Jay Esperanza, deputy sheriff of the Regional Trial Court Branch 17 bared during the dialogue that it is up to the Davao City Police Office (DCPO) as to when they will implement the demolition order.

“The ball is on the police. They will give the go signal to the sheriff regarding the demolition,” said Esperanza.

Esperanza said that Datu Bahajin Mahadali already refused to the residents’ request to postpone the demolition after Ramadan in a negotiation initiated by DCPO Director, Police Senior Superintendent Alexander Tagum.

“He [Mahadali] refused and said he will also observe Ramadan, so the negotiation failed,” added Esperanza.

Gonzales said that the Office of the President forwarded their request to the national office of the Land Management Bureau under the Department of Environment and Natural Resources (DENR) for investigation and resolution.

PCUP Commissioner Baloro said they do not have the power to halt the demolition but he assured the residents he will help in facilitating the request they sent to the national government.

“The commitment of PCUP is to help in following up [to the concerned agency] what happened to your letter request,” Baloro said.

The residents questioned the legality of the land title acquired by Mahadali in 2011. Mahadali claimed that he bought the said land from the Garcia family.

“The court decided in favor of the plaintiff, forcing us to leave our homes when in fact the location stated in the OCT is different,” Vergara lamented.

He said they will be willing to vacate the land if there’s a legal basis.

Last March 27, Salmonan residents received the final notice of demolition that was issued on March 3. At least 67 households consist of 34 Muslim and 33 Christian families will be affected.

The DCPO had already scheduled a four-day demolition last April 17-20 but later decided to defer to avoid “violent confrontation” with the residents.

Virgie Gonzales said they were satisfied with the dialogue because they were able to present the basis and documents on their claims.

They remained worried, though, because there was no assurance that the demolition will be halted.

Gonzales said, “we will fight and defend our homes.” (davaotoday.com)