Bill exempting journalists from being witnesses in anti-drug operations filed 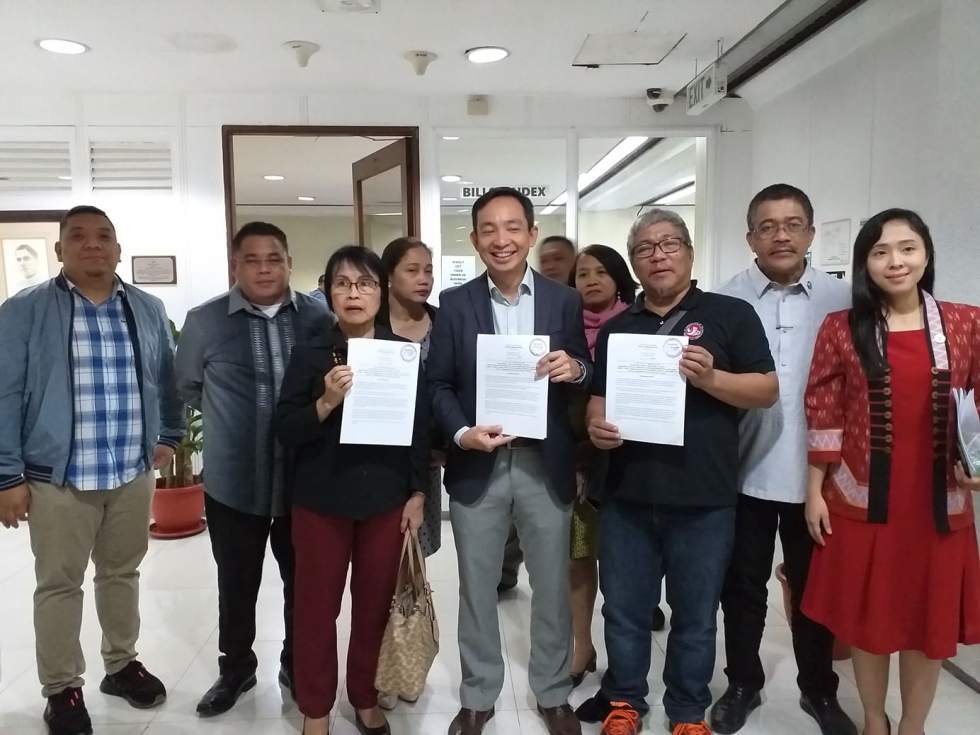 Makabayan lawmakers file House Bill 8832 that aims to exempt journalists to act as witnesses in anti-narcotics operations on Tuesday, January 15, 2019. The bill is in response to the National Union of Journalists of the Philippines’ (NUJP) petition back in November 2018, opposing such practice of the law enforcers. (Kath M. Cortez/davaotoday.com)

MANILA, Philippines – As the government intensifies its campaign against illegal drugs, Makabayan representatives in Congress filed a bill to support the call to spare journalists from becoming witnesses during anti-drug operations.

Led by Act Teachers Partylist Representatives Antonio Tinio and France Castro, the group including Bayan Muna Rep. Carlos Zarate, Anakpawis Rep. Ariel Casilao, Gabriela Rep. Emmi De Jesus and Kabataan Rep. Sara Jane Elago filed the House Bill 8832 or an Act exempting journalists from acting as Anti-Drug Operations witnesses and amending Republic Act No. 10640 or “An act to further strengthen the Anti- Drug Campaign of the government,” amending for the purpose of Section 21 of the Republic Act No. 9165, otherwise known as the “Comprehensive Dangerous Drugs Act of 2002”.

Representative Zarate in an interview said the continuing practice of making journalists as anti-drug operation witnesses may be used as a mechanism to pressure and undermine media independence.

“To maintain the independence and objectivity among journalists, there should not be any restraint in their coverages,” said Zarate.
November last year, the National Union of Journalist of the Philippines (NUJP) launched the Sign against the Sign petition all throughout the country in fear that those who are covering the drug war operations “may unnecessarily place journalists at risk of retaliation from crime syndicates and also exposes them to prosecution for perjury and other offenses in the event of irregularities in the conduct of anti-drug operations”.

Although NUJP stated in their petition that even the provision requiring journalists to sign a waiver as witness in police drug operation has been amended by R.A 10640 in July 15, 2014, making it optional, many provincial journalists have reported that law enforcement units continue to require them to become witnesses, often as a condition for being allowed to cover operations.

To date, NUJP has been continuing to gather signatures for the petition while they also call for the House of Representatives to support the campaign. (davaotoday.com)