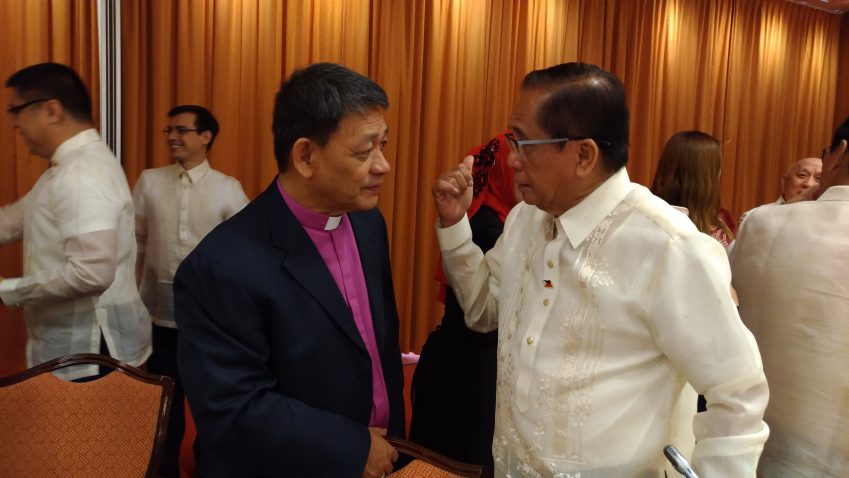 Iglesia Filipina Independiente Bishop Felixberto Calang, convenor of the Sowing the Seeds of Peace Movement in Mindanao chats with Presidential Peace Adviser Jesus Dureza after the opening ceremony of the fourth round of the GRP-NDFP peace talks in Radisson Blu Palace Hotel in Noordwijk, the Netherlands on Monday, April 3, 2017. (davaotoday.com file photo by Zea Io Ming C. Capistrano)

CAGAYAN DE ORO CITY, Philippines — With the delay of the resumption of the negotiations, a church leader said it is up to the Duterte administration to “salvage” the peace talks between the government and the communists.

Sowing the Seeds of Peace main convenor and Iglesia Filipina Independiente (IFI) Bishop Felixberto Calang said the initiative that would ensure that talks would be sustained despite the challenges will depend entirely on the Government of the Republic of the Philippines (GRP).

He said “it is only the GRP that can now ‘salvage’ the peace talks. That means the decision whether to finally save it or to finally kill it lies in the hands of the GRP.”

“For the GRP to cancel the peace talks to allow a 3-month review by the [Armed Forces of the Philippines] in order to ultimately justify the GRP’s withdrawal from the 1992 Joint Hague Declaration is truly living up to the word ‘salbids’ (salvage). Doing so means the GRP is not only ‘unbinding’ itself from these agreements but from its commitment to a just and lasting peace,” the bishop said.

For the government to truly save the negotiations from total collapse, Calang said it must adhere to the following: reaffirm its commitment to the 1992 Joint Hague Declaration and all signed agreement, and for Pres. Rodrigo Duterte to keep his desire of leaving a legacy of peace by delivering on his promises made to Communist Party of the Philippines founding chair Jose Maria Sison’s emissary Fidel Agcaoili in Davao City when he was still then President-elect.

Calang has also called on Duterte to give Presidential Peace Adviser on the Peace Process head Jesus Dureza and Silvestre Bello III the “authentic delegated authority” so they can “speak and uphold civilian supremacy and interests in the negotiations; their ability to negotiate should not be contravened or dictated by the security cluster.”

He said the government must genuinely create the conducive and enabling environment by rescinding various proclamations on martial law, terror-tagging, among others.

Calang said one way the government can “salbids” or kill the peace talks if it declares the security sector as the virtual head of the GRP negotiating panel, and if it demands only the surrender and submission of the National Democratic Front of the Philippines (NDFP) instead of seeking the middle ground in order to resolve the roots of the armed conflict.

Another way, he added, is to make the bilateral ceasefire agreement as the end-all of the negotiations instead of the signing of the Comprehensive Agreement on Social and Economic Reforms which is the meat of the peace process, and to resort to an intensified all-out war which is directed against civilians especially the indigenous people, Moro and farmers of Mindanao.

“Ultimately, the salvaging of the peace talks rests on the President. He can either go the way of being a benevolent leader and leave a legacy of genuine peace based on social justice, or he can force this peace upon the nation with the brutalities of an all-out war,” Calang said.

Calang has also called on the NDFP to consider the peace talks as a viable option despite the bumps along the way.

“My appeal to the NDFP is to consider the negotiations,” he said, adding that peace might be elusive for them but they must not lose hope and continue to make efforts for both parties to go back to the negotiating table. (davaotoday.com)