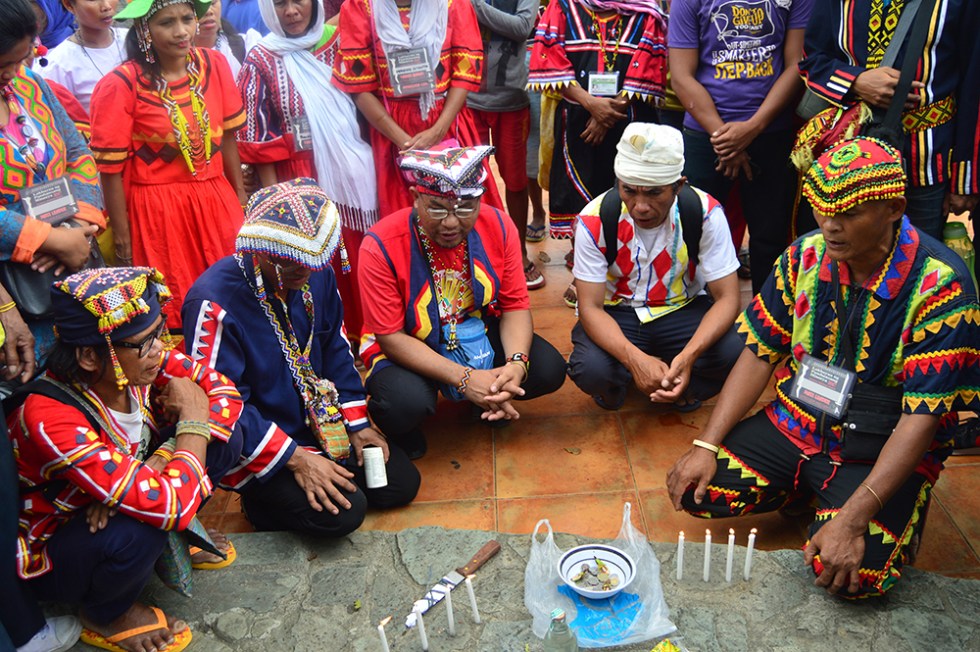 Tribal leaders perform a traditional ritual before they embark on a journey to Manila to protest the various abuses under the Duterte administration, at the Press Freedom Monument, here, on Tuesday afternoon, August 22. (Jigger J. Jerusalem/davaotoday.com)

CAGAYAN DE ORO CITY, Philippines – More than a thousand indigenous peoples (IPs) and Moro communities from Mindanao are on their way to Manila to express their dismay over the continued abuses perpetrated by the present administration against tribal minorities.

In the region alone, there are about 300 IP and Moro members who have joined the “Lakbayan ng Pambansang Minorya 2017” (journey of the national minorities) as they left for Manila on Tuesday, August 22, said Datu Jomorito Goaynon, chair of the Kalumbay Regional Lumad Organization.

Goaynon said various organizations and tribal groups have coalesced to relay to President Rodrigo Duterte their plight under his administration including their demand for the government to give them their right to self-determination, the lifting of the martial law and the resumption of the peace talks.

They are appealing to the government to address the issues on land-grabbing, human rights violations, bombings, forced displacement, and extrajudicial killings.

The protesters belong to the Maranao, Manobo, Talaandig, Higaonon, Bukidnon, and Matigsalog tribes.

Felix Bollozos, 50, a Higaonon tribal leader from Gingoog City, said he and some of his fellow residents decided to join the protest action because they see government and business entities have undermined and disrespected their right to their ancestral lands.

“One group wanted to plant trees within our ancestral domain without our approval. We have no problem if they only asked our permission. We also found out that what they will plant is falcata, which is used for commercial purposes, and not native trees,” Bollozos said.

“It is our hope that we are recognized and respected by the government and private companies,” he added.

Alana Ann Rey Cortes, media officer of the Manilakbayan Northern Mindanao contingent, said their protest will highlight the ongoing humanitarian crisis in the Lanao provinces in light of the Marawi conflict.

This year, Cortes said, groups aim to expose the displacement of thousands of residents in Marawi and the implementation of the martial law in Mindanao.

“Evacuees affected by the Marawi siege will be led by the newly-formed Tindeg Ranao and march alongside other national minorities,” she said.

Asliah Ampuan, 25, a displaced resident of Marawi City and a member Tindeg Ranao, said the conflict in Marawi has destroyed her community as she called on the Duterte government to stop the bombings and end the war.
“Stop the war! Stop the bombings in Marawi,” Ampuan said.

Fr. Roland Abejo, an Iglesia Filipina Independiente (IFI) and member of the Promotion of Church People’s Response (PCPR), said the government has not actually improved the situation of civilians who have suffered from human rights abuses.

“It is no different from [the term of former Pres. Benigno Aquino], but is much worse as it orders the strafing of Lumad schools, removal of lumad students, and harassment of teachers,” Abejo said.

The protesters are expected to arrive in Manila on Thursday, August 24. They have set a protest rally in Mendiola a day after their arrival. (davaotoday.com)