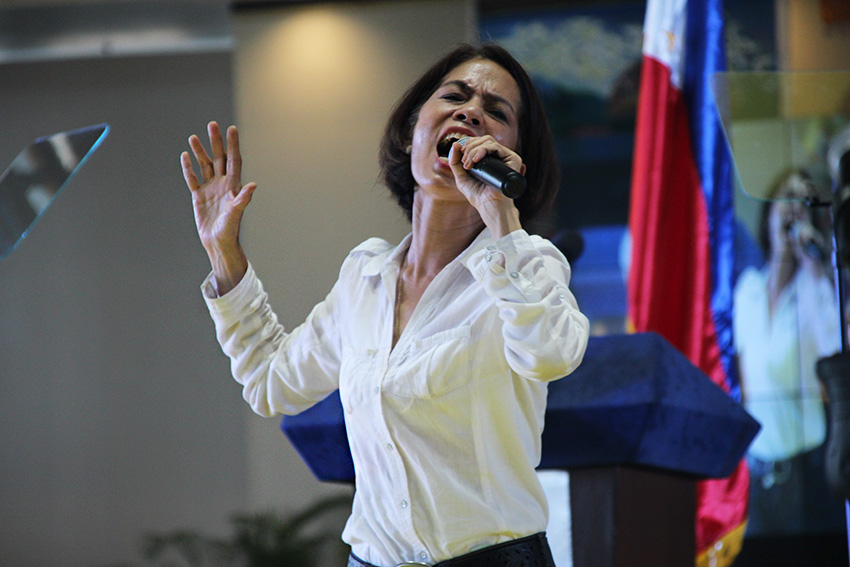 HIGH ENERGY. Department of Environment and Natural Resources secretary Gina Lopez encourages the youth to actively take part in the fight to preserve the country’s natural resources during the State of the Mindanao Environment held at the Martin Hall of the Ateneo de Davao University Thursday afternoon, August 4. (Paulo C. Rizal/davaotoday.com)

DAVAO CITY, Philippines — The Commission on Appointments rejected the appointment of Gina Lopez as the Department of Environment and Natural Resources secretary for the third and final time.

Lopez, whose appointment was twice bypassed by the CA, cannot be reappointed by the president anymore.

“To Gina I truly admire her passion and love for the environment. Your dreams to make the brown fields turn into green, the water to be clean and clean fresh air to surround our land. I remember, I was your partner preserving the environment, wala pa tayo sa pulitika, wala pa tayo sa gobyerno. At dama ko ang iyong malasakit sa kalikasan. You would really make a difference,” he said.

“But a commission has voted today and has met the required 13 votes. With sadness in my heart, this committee through this plenary is terminating its deliberation on Gina Lopez’ appointment not in the way I personally wanted to, but in the decision of the majority, which I am sorry, but we must all respect.”

“To you Gina Lopez, my supposed DENR secretary, I salute you,” he added.

Senators Vicente Sotto III, Loren Legarda, JV Ejercito, and Francis Pangilinan III as the representative of the Liberal Party lawmakers manifested their dissent from the the committee decision.

“Mr. President, it is unfortunate that we let pass a great opportunity for my much beloved Department of Environment and Natural Resources to be led by someone who has the passion, integrity and political will to implement our environmental laws,” Legarda said.

Lopez drew the ire of many mining groups because of her strong stance against mining.

Read related story:‘Horrifying’: Lopez says 37 of 75 MPSA to be cancelled are in Mindanao

Lopez also required suspended mining companies to give P 2 million pesos for every hectare of farm land affected by mining operations, but outside the rehabilitation zone; an order counteracted by Executive Secretary Salvador Medialdea.

This move resulted into a 4th graft complaint filed against Lopez by the Citinickel Mines and Development Corporation.

In previous interviews, Lopez said the odds of her being confirmed were low, saying that many lawmakers in the CA were miners.