NORTH COTABATO, Philippines — Some 600 farmers, students, employees, and faculty members under the Save CFCST Movement mounted a protest camp inside the Cotabato Foundation College of Science and Technology here to demand the ouster of school President Samson Mulao whom protesters linked to frustrated murder, corruption, and mismanagement.

Farmers under the MAILUMINADO Farmers Association also joined the protest against the president for they have been threatened to be displaced from the school’s vast agricultural property.

Harris Sinolinding, faculty representative of the Save CFCST Movement, linked Mulao to the attempt on his life. 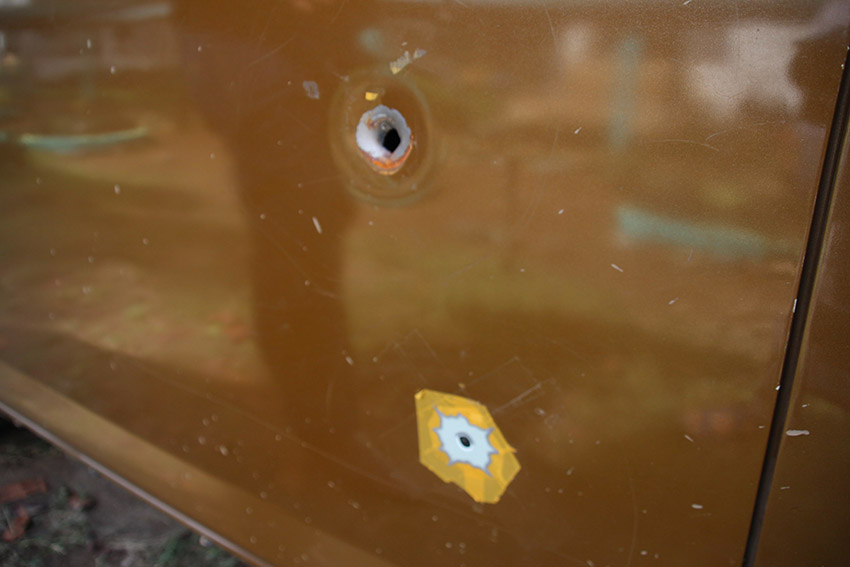 BULLET HOLES. A bullet hole on his car reminds Dr. Harris Sinolinding of the two gunmen who ambushed him early morning of August 2 this year. Sinolinding says he has no enemies, except those he made as a vocal critic of the Molao administration. (Paulo C. Rizal/davaotoday.com)

Sinolinding, who was inside his car, was shot by two unidentified gunmen while inside the campus last August 2.

“I do not have any enemies except those I’ve made as a vocal critic of the CFCST administration because of corruption,” he pointed out.

Similar killing attempts were also made to other personnel who were critical of Mulao’s management, protesters claimed.

CFCST’s Vice President Delfin Plang Moreno was gunned down back in Sept. 13, 2013 while Engr. Cedric Mantawil, the school’s planning officer who questioned the anomalies in the school projects survived an ambush on Nov. 21, 2015.

“VP Moreno led a rally [in] 2013, [I] led a signature campaign, Mantawil disapproved the construction of the registrar building due to anomaly. We were against the management of Molao. Molao is vindictive,” Sonalinding told Davao Today through text message.

Sinolinding also scored the construction of the buildings as “substandard.” 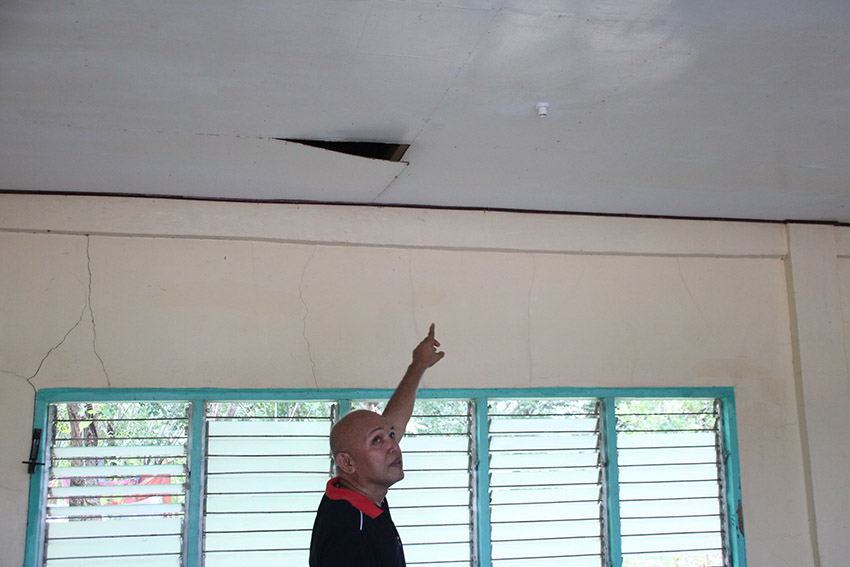 NEWLY DILAPIDATED. Dr. Harris Sinolinding, a professor of the Cotabato Foundation College of Science and Technology points to a dangling ceiling panel in a classroom building that was only three years old. Sinolinding is among the faculty who joined a protest camp inside the school grounds to demand the ouster of school president Dr. Samson Molao, whom he accuses of bypassing the procurement process by giving projects to business and construction firms owned by relatives. (Paulo C. Rizal/davaotoday.com) 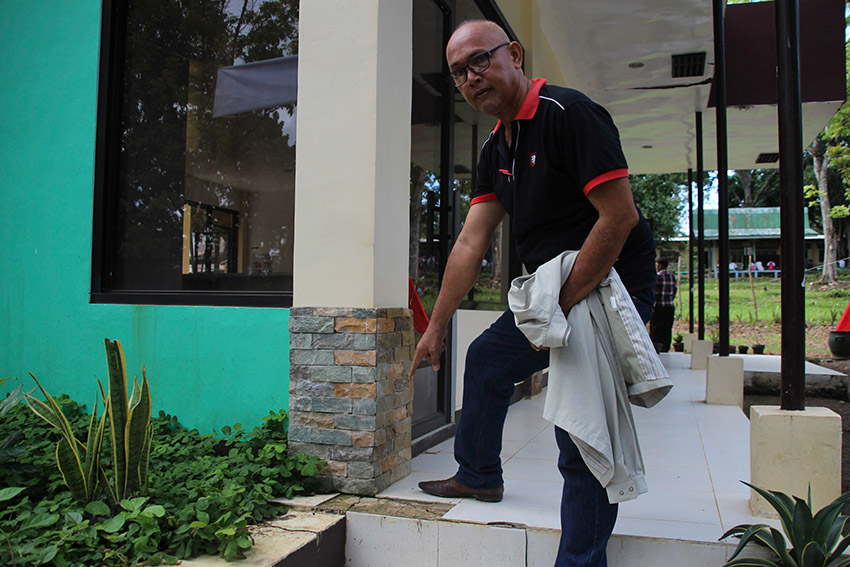 BRAND NEW CRACKS. Dr. Harris Sinolinding, a professor from the Cotabato Foundation College of Science and Technology points to a cracked floor of the Biological Sciences Lab, one of the school’s newest facilities that had the budget of P2.234 million. Substandard construction of the facilities in the school is one of the corruption allegations that school president Dr. Samson Molao is facing from at least 600 farmers, students, and faculty who have set up a protest camp inside the school grounds in Brgy. Doroluman, Arakan, North Cotabato. (Paulo C. Rizal/davaotoday.com)

Sinolinding also said that school president Mulao was involved in the anomalous construction of school buildings and other purchases by awarding the contracts to his kin and other members of the administration.

“We cannot stand this anymore. The only solution is a change in leadership,” Sonalinding said.

Meanwhile, Glenda Saligan, who represents the employees of CFCST said they have already forwarded their concerns to the Commission on Higher Education XI office in Davao City. Initially, Saligan said they were hopeful because a fact finding committee was dispatched to investigate.

However, it later surfaced that the committee’s findings favored Molao.

Saligan said they had already lost faith in CHED and was preparing to file a case to the Ombudsman.

“No self-respecting and true fact finding committee would send only one person and have them talk to only one party,” Saligan said.

Farmer leader Cecilio Carmilo, chairperson of MAFAI, said the CFCST has only developed 300 out of its 1,000 hectare reservation, and should give the remaining 700 hectares back to the farmers who have been farming the lands.

Carmilo said the farmers are in constant danger of being driven away from their lands because of the title acquired by the CFCST in 2009.

The CFCST was established in 1969 by local leader Bai Matabay Plang inside a 1,000 hectare land reservation in Brgy. Doruluman, Arakan Village, North Cotabato which was  awarded through Republic Act 3801.

The same land was part of a 5,091 hectare reservation area of the University of Southern Mindanao (then Mindanao Institute of Technology) awarded through Presidential Proclamation No. 428 signed by then President Carlos P. Garcia. 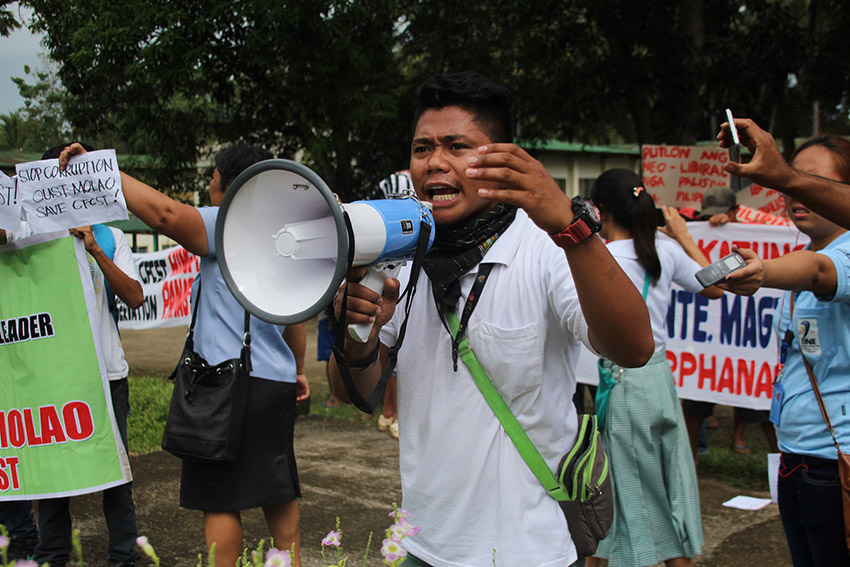 FED UP. Elfred Llave, 21, who studies in the Cotabato Foundation College of Science and Technology says he can no longer stay blind and mute about the corruption going on in his school. Llave is among the students and faculty who demand the ouster of school president Dr. Samson Molao. (Paulo C. Rizal/davaotoday.com)

During the protest action, students dished out several complaints against the administration.

Elfred Llave, 21, criticized the school’s “low” quality of education, saying “there is no future here. When we graduate, what jobs will we get? This is because we are not being given the quality education that we deserve.”

Another student Aiza Sumalia, 26, also criticized the Mulao administration for its failure to deliver the services.

Sumalia said students have been paying P350 for a “connectivity fee” but have not been able to use the internet service up to now.

Sumalia said that a tower had only been recently built, but the internet network was not made available to the students because they were not given the password.

Futhermore, the tower was erected only after they mounted a protest rally in front of the Commission on Higher Education Region XI in Davao City.

“We have to spend another P20 to gain internet access on top of the P350 because we don’t have the password,” Sumalia said.

Sumalia also mentioned how school instructors would only attend classes twice or thrice a semester because of the heavy administrative work.

“This is clearly not the fault of the instructors; this came from the order of the administration,” Sumalia said.

For his part, Vice President for Land Development Dr. Zainudin Adam downplayed the complaints against Mulao, saying the matter was instigated only by “jealousy” and the accusations of corruption were baseless.

“We could not avoid jealousy especially [about] promotions. May mga taong gustong ma-promote, pero hindi mapagbigyan ng pagkakataon (There are people who want to be promoted but were not given the chance),” Adam said.

“This was already investigated by CHED, wala naman” (nothing happened), Adam added.

When asked about the farmers’ claim to the lands, Adam said he was sympathetic to the plight of the farmers, but claimed that they are not authorized to give up the lands to the farmers. (davaotoday.com)