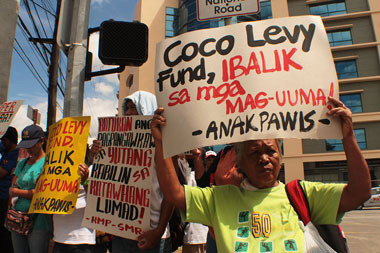 “If Malacañang indeed wants Congress to fast-track the return and utilization of the coco levy fund, President Rodrigo Duterte must certify as urgent House Bill 557 and direct the House leadership to pass the said bill that seeks to return the control and management of the multi-billion coco levy fund to small coconut farmers and their heirs thru the creation of a Genuine Small Coconut Farmers Fund,” said Antonio Flores, secretary general of Kilusang Magbubukid ng Pilipinas in a press statement on Tuesday.

The coco levy fund must be declared as a coconut farmers’ trust fund, Flores pointed out, as he also urged the government for the establishment of a small coconut farmers’ council to ensure the direct management and administration of the recovered coco levy.

The council, Flores added, must be composed of the coconut farmers themselves.

In the same statement, Jonathan Sibulino of the Coco Levy Fund Ibalik Sa Amin or CLAIM-Quezon hit the other bills filed in Congress and the Senate that seek for the creation of a Coconut Farmers Trust Fund that will utilize only the interest and keep the principal fund intact.

CLAIM is the national organization of coco levy fund claimants in the country.

“In essence, the majority of the bills filed are supporting the privatization of the coco levy fund through the investment of the said fund and hiring of economic managers to administer the fund,” Sibulino said.

Both the KMP and CLAIM are pushing for the enactment of HB 577 authored by Anakpawis Party-list and being supported by the Makabayan Coalition in the lower House.

Flores said salient provisions of HB 557 have already been diluted several times at the House Committee on Agriculture in an attempt to consolidate all other coco levy bills into single legislation and allow private corporations and corrupt bureaucrats to prey on the coco levy fund.

“We reiterate our position that small coconut farmers should be the primary beneficiaries of the coco levy fund in the form of cash and other social benefits, including but not limited to the following: pension benefits, medical and hospitalization benefits; maternity benefits and educational assistance including scholarships,” Flores said.

Sibulino, on the other hand, stressed that more than 3.5 million coconut farmers and their families are still waiting for the President to make good his promise of returning the coco levy fund.

“Coconut farmers have been waiting long enough. Time and again, we have consistently asserted to the government the need to give the control of the fund to small coconut farmers. Farmers’ control of the coco levy fund is necessary to ensure that the fund will be utilized for its intended use and purpose, that is to give cash and social benefits and their heirs, foster agrarian reform in coco lands and develop the coconut industry,” he said.

Sibulino described the proposed creation of a new government-owned and controlled corporation to manage the coco levy fund as “adding salt to the wound” and repeating the errors and injustices of the past.

“For more than four decades, private companies, banks, oligarchs, and Marcos cronies like Danding Cojuangco, have deprived coconut farmers of the right to the fund. Why would the current administration allow that to happen all over again?” Sibulino said.

The group also asked Duterte to consider the farmers’ seven-point proposal for the disposition of the coco levy fund.

“The President could issue an Executive Order and decisively determine the mechanics of the return and utilization of the coco levy fund that is supported by small coconut farmers,” Sibulino added.

The group added that socio-economic programs and projects of small coconut farmers through their recognized organizations/cooperatives will be financed by the recovered coco levy funds and assets, and the shares and dividends from the investments made from coco levy including assets and corporations and development of the coconut industry including livelihood program, development of coco enterprises, loan facilities for small farmers, post-harvest facilities, research and development.

“All coco levy funds acquired assets, investments, and corporations shall be turned over to the Small Coconut Farmers Council,” Sibulino said. (davaotoday.com)