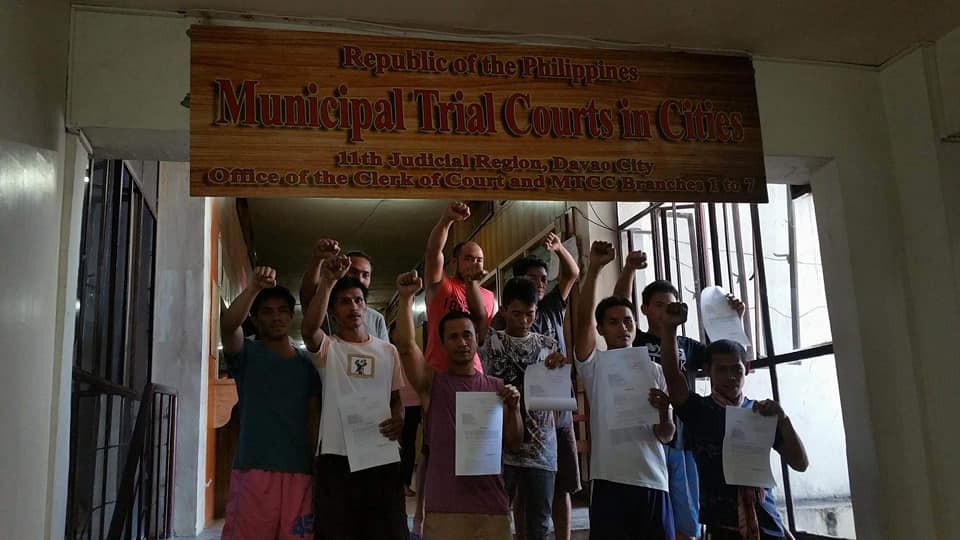 Workers of Coke who were arrested by Talomo police last April 2, 2018 after barricading the company gate to protest their alleged illegal dismissal were temporarily released after posting bail Friday.(Photo courtesy of Kilusang Mayo Uno-Southern Mindanao)

On Thursday, protesting workers of Coca-cola along with support groups trooped at the Philippine National Police Talomo station  to demand the immediate release of 10 of their colleagues who were arrested last Monday, citing that the 36-hour period for filing of cases had already lapsed.

Kilusang Manggagawa laban sa Coca-cola-Kilusang Mayo Uno (KIMACO-KMU) said they will press charges against the Talomo police station for the arbitrary detention of the 10 workers.

The union stressed that the supposed complaints of the PNP regarding grave coercion and disobedience only constituted temporary detention up to 18 hours.

If they were charged with graver offense, the 36-hour period had already lapsed as of 10:00 pm of Tuesday, April 3.

Coke union workers staged a strike on Monday after 72 workers were terminated by their labor agency. Ten workers were arrested by the police hours later.

“No resolution was released from the Prosecutor’s Office from their inquest on the PNP’s initial complaint of grave coercion and disobedience.  The PNP continues to detain the ten workers,” KIMACO-KMU said in a statement.

The workers’ camp filed at the Prosecutor’s Office on Wednesday, April 5, a motion to dismiss the case and release the respondents. They also submitted a letter of request addressed to the Talomo station commander for the immediate release of the unionists.

Davao Today was not able to get a statement from Talomo Police Chief Ronald Lao but PSI Bernie Suaga of the Talomo station on Wednesday said they cannot release the unionists because they are still waiting for the fiscal’s order.

“They [protesters] demand for the release of their colleagues, but it’s out of our hands as only the fiscal can decide,” said Suaga.

KAMACO-KMU refuted this saying this is a clear violation of the law.  The PNP has no legal basis for detaining the workers.

Bayan Muna party list representative Carlos Isagani Zarate said the police should be held accountable in detaining the respondents beyond the allowable period.

“They should have released them [workers] since no cases were filed between the allowable period. The police should know their limits. It’s true that they can arrest an individual if they see that an offense or crime was committed but they should also observe the rights of the arrested person,” said Zarate.

The Office of the City Prosecutor on Thursday afternoon issued a resolution signed by Associate Prosecution Attorney Delfin M. Suarez Jr., dismissing the complaints for “Tumults and other disturbances of public order and grave coercion” and only recommended to charge the workers with simple disobedience.

The union stressed that neither the PNP nor the Prosecutor’s Office has the jurisdiction over the strike of Coca-Cola workers considering that it is a case of labor dispute and should be addressed by the Department of Labor and Employment (DOLE).

“This is a case of criminalizing the workers’ legitimate right for redress of grievance, right to assembly and protest. It is but a means to silence workers who are fighting against ENDO [end of contract],” said KIMACO-KMU.

In jail, Ricardo Sales cried foul over the unjust dismissal by the company where he worked for almost nine years.

“Our length of service is enough for us to be made regular workers. After nine years of hard work, we were changed to floating status and dismissed instantly,” Sales in vernacular.

Sales related that before they were dismissed, they were even asked by the agency to train the new workers who will replace them.

“It was an insult to us,” said Sales.

Last month, Coca-Cola workers in Sta. Rosa, Laguna staged a strike after the company refused to regularize 675 contractual workers as ordered by the DOLE Region IV-A.(davaotoday.com)