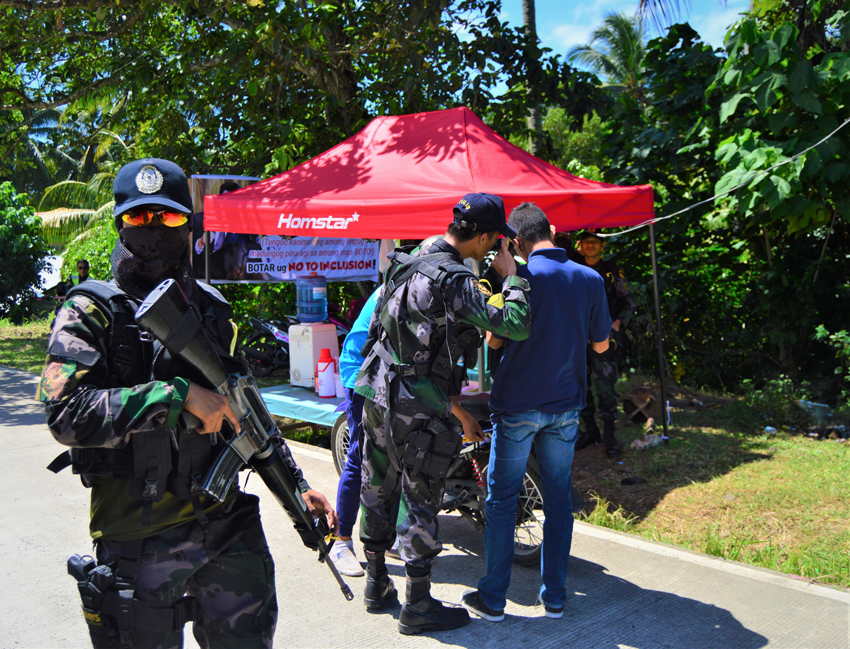 Police and military personnel man a checkpoint in the national highway in Lala, Lanao del Norte as the people of this province cast their vote and decide whether the six towns will be included in the soon-to-be created Bangsamoro region. (Jigger J. Jerusalem/davaotoday.com)

TUBOD, LANAO DEL NORTE – Authorities have urged the people of this province to go out and vote whether six of Lanao del Norte’s towns will be included in the new Bangsamoro region despite the explosions that occurred in three towns Monday, the eve of the Feb. 6 plebiscite.

Provincial election officer Joseph Hamilton Cuevas has assured voters that security forces were deployed in various areas to ensure that the plebiscite will be peaceful.

“No need to be afraid,” Cuevas said in a text message Tuesday, referring to the thousands of voters of this province who will cast their votes today.

“The explosions yesterday were meant to scare the people, not to injure or kill,” he said.

Cuevas said “we have enhanced our martial law checkpoint to check all movement of vehicles and to thwart any other untoward incidents today.”

He added there will be “more visibility in the voting centers.”

Some of the police officers came from other parts of the region and Mindanao, he said.

Saad said the police are still investigating the explosions and are verifying if these were caused by a grenade or improvised explosive device.

He said the first blast occurred in the business district of Lala town at about 4:30 in the afternoon. Seconds later, another explosion was reported in Kauswagan, some 59.8 kilometers away.

“We still to find out if [these blasts] were coordinated, or related to the plebiscite,” Saad said.

Supt. Surki Sereñas, regional police spokesperson, said no one was hurt in the incidents, as he clarified that the reports circulating that the devices used in the attack were grenade IED did not come from them.

“We appeal for calm and sobriety. This misinformation is the handiwork of those who want to sow fear and panic among the people of Lanao del Norte and derail the conduct of a peaceful and orderly plebiscite,” Sereñas said.

“Rest assured, we will all do our best to provide appropriate security as the people of Lanao del Norte express their will in this plebiscite,” he added. (davaotoday.com)