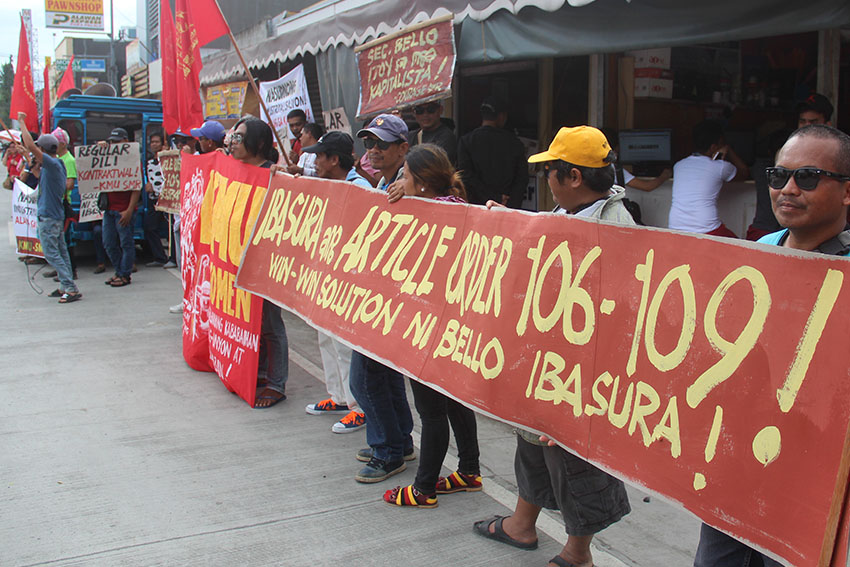 Members of Kilusang Mayo Uno protest outside the University of Southeastern Philippines in Obrero, Davao City where a congress hearing on contractualization and security of tenure was held Thursday, February 23. (Earl O. Condeza/davaotoday.com)

DAVAO CITY, Philippines – The militant labor center Kilusang Mayo Uno urged Congress to drop two provisions in the Labor Code of the Philippines which they said promote contractualization of labor.

KMU staged a protest rally last Feb. 23 outside the University of Southeastern Philippines Obrero Campus to call the attention of the government while a Congress-led congressional hearing on contractualization and security of tenure was conducted by the Committee on Labor and Employment inside the school at the same time.

“We are calling on them to junk the articles 106, 109 for they have been used by capitalists to create contractors, service agencies inside the company,” Olalo said.

Labor code’s Article 106 states that “whenever an employer enters into a contract with another person for the performance of the former’s work, the employees of the contractor and of the latter’s subcontractor, if any, shall be paid in accordance with the provisions of this Code.”

While Article 109 states “every employer or indirect employer shall be held responsible with his contractor or subcontractor for any violation of any provision of this Code.”

“These promote contractualization all over the country,” Olalo added.

“We need to get rid of these provisions and instead have employers directly hire workers instead of coursing them through these contractors and labor agencies,” Olalo said.

For his part, Labor Undersecretary Joel Maglunsod said “there is a big chance [ to remove these articles] if the government is serious.”

The issue being tackled during the congressional hearing, according to Maglunsod was “i in line with the campaign of the administration against contractualization.”

“What the workers want is to remove the articles 106 and 109 for this will eliminate contracting and subcontracting,” Maglunsod said.

Labor contracting and subcontracting, Maglunsod noted, violate the workers’ rights to avail of benefits, the right to security of tenure, and the right to organize, to unionize.

Rep. Randolph Ting said the hearing was a good venue for them to hear the problems of different labor groups and management all over the country.

The congressional hearing here was their second leg to come up with one resolution that would end contractualization.

As of now, Lim said there are 23  House bill resolutions seeking to end contractual practice.

Lim said that the technical working group will gather all the concerns of workers and management, and to come up with a new law.

“If we will reach an understanding, there will be prosperity and protection to the workers while not being unfair to the management, let’s balance it,” Lim added.

The hearings will continue up to December this year before the committee will submit their resolution to plenary debates.

Their next stop, will be in Cebu slated sometimes on March and in Laguna this coming May.

Of the said 23 resolutions filed with the House committee on labor and employment, Anakpawis Partylist’s resolution, the House Bill 556, appears to be unique among the 22 bills because of it imposes penalties for incorporators.

Anakpawis Rep. Ariel Casilao said their bill includes a fine of P500,000 and correspondent imprisonment to the incorporators if found guilty contracting workers.

“This is the difference with other bills, which just increase the fine, but HB 556 incorporate jail time,” Casilao said, “to curb possible circumvention.”

The rationale of adding jail time to violators, according to Casilo, so that employers won’t be able “to easily get away even found guilty”.

“They can just pay,” Casilao said.

The incorporators referred in the HB 556 include the companies’ president and members of the board of trustees. They will be fined P500,000 and to serve jail time.

The KMU here said the HB 556 otherwise known as the  Regular Employment Bill would be a good alternative to end contractualization. (davaotoday.com)