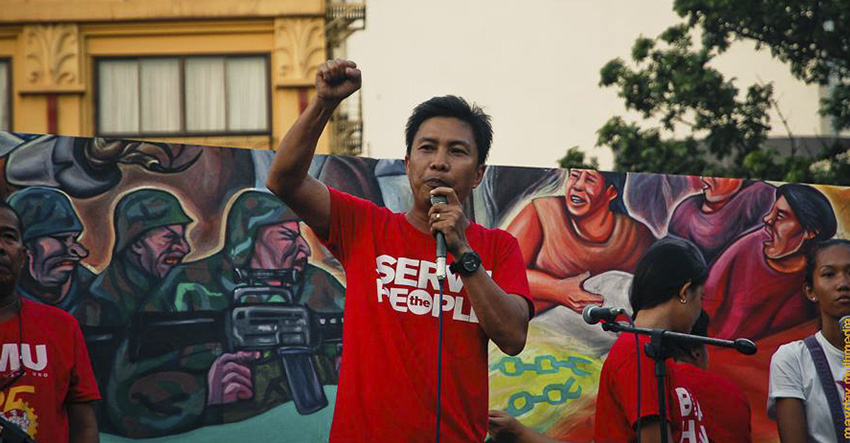 Jerome Adonis, Kilusang Mayo Uno secretary general, speaks before the crowd during the Labor Day protest at the US Embassy in Manila. (Photo by Mayday Multimedia)

“This campaign for expanded maternity leave is supported and fought for by women workers, both those who are employed as regular and those who are contractual,” KMU secretary-general Jerome Adonis said in a statement Thursday.

“Contractual employees do not benefit from maternity or other leaves, and this is unjust because they perform the same necessary tasks as their regular counterparts, but their economic circumstances are much poorer,” he added.

On Tuesday, the House of Representatives has approved a bill expanding the current 60 days maternity leave to 100 with pay.

Under House Bill 4113, pregnant female workers in the government and the private sector can secure a 100-day maternity leave, regardless of their marital status and regardless if whether the child was delivered through the normal process, or through caesarian section or if there was a miscarriage.

While Adonis recognized the bill as “long-overdue,” he expressed hope that the bill will be enacted into law the soonest because “it responds to the needs of thousands of Filipino women workers and their families.”

“We want a clause to be included in the bill that all contractual women workers can avail of maternity leave, and given the same protections under it as those that are enjoyed by regular women workers. There should be no discrimination under the law,” he insisted.

Adonis further warned that once the bill will become a law, it should not be used by any employer against women workers, citing labor malpractices committed by companies such as terminating employees because of pregnancy.

“There are already many companies that use pregnancy as a reason to terminate women workers, or not to employ them. This is a deliberate attack against the rights of women workers and an evasion of responsibility of companies to provide maternity leave and support to their women employees,” he said.

A penal clause that criminalizes all attempts of companies to dismiss women workers because they become pregnant should be included as a provision of the expanded maternity leave bill, according to KMU’s Adonis.