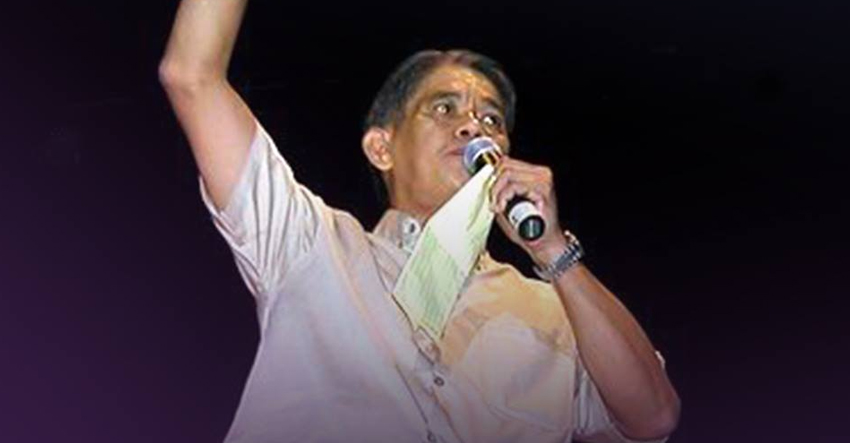 It was the first operation of the joint police and military forces that went after peace consultants after President Duterte ended negotiations with the CPP-NPA in November 2017.

He was arrested together with his companion Roque Guillermo Jr., allegegedly a rebel, and they were both charged with illegal possession of firearms and explosives upon arrest.

However, the Regional Trial Court of Quezon City Branch 100 on Tuesday, January 15, 2019, dismissed the case against Baylosis and Guillermo, and ruled that their arrest by the PNP-AFP last year was illegal.

Judge Editha G. Miña-Aguba, the preciding judge over the case, highlighted that for the “evidence to be believed, it must not only proceed from the mouth of a credible witness but it must be credible in itself.”

She issued this promulgation after the police insisted during the trial that the two were roaming around Manila and Quezon City with guns tucked in their waists, and toted around a bag of red rice with a grenade.

Aguba lashed on the police narratives’ lack of credibility “such as the common experience and observation that mankind can approve as probable under the circumstances.”

Lengua de Guzman, Baylosis’ daughter, welcomed the RTC’s resolution and shared her confidence on her father’s innocence as she told about how witnesses by the prosecution were being inconsistent in their testimonies.

“They cannot even make a decent presentation of evidence- a .45 cal gun supposedly on my father’s waist and a grenade supposedly found in a bag rice. Why? Because the evidence is all made up to begin with,” said de Guzman.

On the other hand, Baylosis’ defense also presented the procedural mistakes on the arrest leading to the coordinated and planned malicious efforts to fabricate charges.

De Guzman said that this may be a reason to celebrate, however, the battle is not over yet as her husband is still in jail facing the same false accusations together with 530 other political prisoners in other parts of the country.

The Coalition for the Defense and Freedom of Rafael Baylosis had no doubt that his innocence will be proven.

In a separate statement from the Public Interest Law Center (PILC) of the Philippines, the dismissal of the Baylosis’ case doesn’t only prove his innocence but has also exposed desperate efforts by the police and the military in carrying out illegal actions against peace consultants and political activists. This includes vilification, undue surveillance, illegal arrest, planting of evidence, and filing of trumped-up charges.

PILC has determined the same tactics in the cases of Adelberto Silva, Vicente Ladlad, and Rey Casambre who were also falsely accused following the dismissal of cases in mid-2018 of the same charges against peace consultant Ruben Saluta and his five companions.

Baylosis is determined to file counter charges against the security forces involved from CIDG-Manila and the Intelligence Service of the AFP, and those who were involved in the fabrication of the charges. PNP Chief General Ronaldo “Bato” dela Rosa, who insisted that the police operations at that time were valid should also be held accountable, said Baylosis. (davaotoday.com)