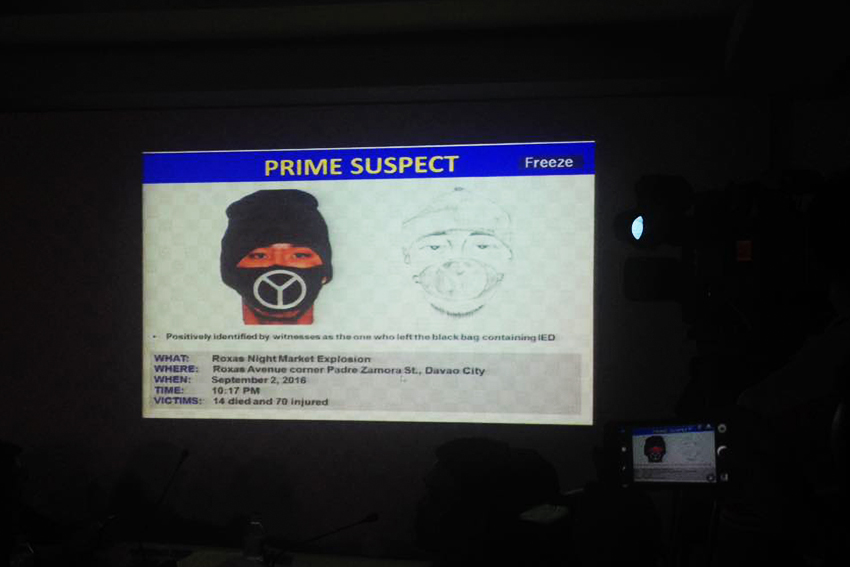 The Police Regional Office XI released the artist and digital sketch of the suspect in the Roxas night market bombing. (Maria Patricia/davaotoday.com)

DAVAO CITY — Ironically, one of the suspects in the bombing here covered his face with a mask bearing a peace sign, police authorities said Wednesday, September 7.

PRO 11 director Police Chief Superintendent Manuel Gaerlan described the male suspect “with a height of 5’7 to 5’8 around 30 years old, slim build and has a fair to dark complexion.”

Gaerlan said that from the statement of the witnesses, the male suspect’s face was covered by a mask.

“We based this on the account of witnesses, so during the whole time he (the suspect) was having his massage, he didn’t remove his mask,” he said.

Gaerlan said that witnesses of the blast are positive on the sketch since “magaling sila magtanda ng mukha even kahit takpan mo, they have seen the eyes (they are good in identifying the face of the suspects even if he was covered by a mask, they have seen his eyes).”

Director Magalong added that the suspect is “definitely a member of an extremist group.”

Magalong also said that the improvised two-mortar rounds explosive device (IED) used in the Roxas blast has a signature IED.

“We are comparing our investigations to the other IEDs that were recovered in different areas or different bombing incidents here and there is a common signature,” he said, adding that it was similar to IEDs used in Cotabato and Sultan Kudarat areas which are mostly planted in convergence areas such as terminals and the Roxas night market.

He said that the PNP was able to reconstruct and were able to come up a sketch of IED.

Magalong also confirmed that a cellphone with a memory card was used as a triggering device of the IED.

“We were not able to determine the phone since we can’t reconstruct it because of the blast,” he said.

He also said that the public would be a help in catching the suspect based on the sketch.

“He (suspect) has moved somewhere else using this very specific mask with a peace sign. Those who might probably saw him taking it off, maybe he ate somewhere before the incident, might give testimonies to help the investigations,” he said.

Gaerlan said the three remaining persons of interest are one male and two females. He said they will not yet release the artist sketches of the three “since they are not yet suspects to the bombing,” he said.

Meanwhile, Director Magalong there is still a possibility that the bombing is connected with narcopolitics who used members of extremist groups.

“It is something that we are looking into since there are some who have motives of extortion, but they are using the members of the extremist group,” he said.

As of now, Magalong said that the investigators is now pursuing on the location and the whereabouts of the first suspect of the Roxas night market blast that killed 14 individuals and wounded 70 others. (davaotoday.com)