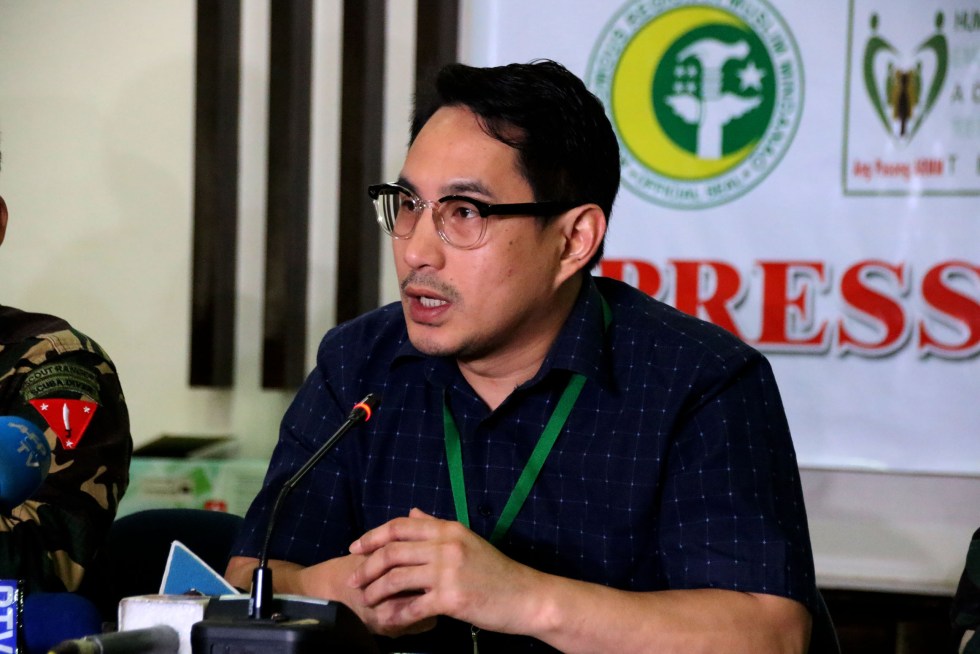 NO HUNGER. Spokesperson Zia Alonto-Adiong of the Provincial Crisis Management Committee denies earlier reports that some displaced families from Marawi City have already experienced hunger inside evacuation centers. Adiong made the clarification in a press briefing at the Provincial Capitol in Marawi on Wednesday, June 21. (Alex D. Lopez/davaotoday.com)

MARAWI CITY, Philippines – Spokesperson Zia Alonto-Adiong of the Provincial Crisis Management Committee denied earlier reports that some displaced families from Marawi have already experienced hunger inside evacuation centers, and that others were already forced to eat blankets and food boxes.

“The report is inaccurate,” Adiong told reporters in a press briefing at the Provincial Capitol here on Wednesday, June 21.

Adiong said data will prove that the evacuees were provided with food and other needs while staying in evacuation centers.

“Since day one we have been dealing with humanitarian relief missions and served 28,927 families in Iligan City alone,” he pointed out.

A total of 7,230 home-based displaced families were also provided with the needs by the government, he added.

Validation of internally displaced persons is also ongoing, Adiong said, and have provided them already with family assistance ID cards.

“The ID cards is meant for profile and provide the IDPs with the necessary humanitarian relief and food assistance based on their individual needs,” he said.

As of Wednesday, a total of 1,147 families in evacuation centers and home-based in the province of Lanao del Sur were already served, Adiong clarified.

“There’s no truth to the report that came out two days ago,” he said.

Adiong also updated the media on the continuing efforts to rescue civilians who are still trapped in war-torn areas in Marawi.

He said that 11 more civilians were rescued through the combined efforts of the military, the local government unit, and civilian volunteers.

The trapped civilians were rescued from the areas of Barangays Raya Madaya, Matampay, Lilod Madaya, Bacolod Chico, Marinaut and Toros.

The second round of operation padlock with the aim of securing houses inside Marawi also pushed through on Tuesday, Adiong said.

Around 300 houses were already padlocked and secured by the local government with the support of the military, he added.

Both Herrera and Adiong also urged residents of Marawi to report to the human rights office any information of their houses being looted.

A human rights desk is being manned regularly by personnel at the Capitol building.

Report of looting was also recorded by the members of the National Interfaith Humanitarian Mission conducted during the second week of June.

Aside from human rights violations, the mission also uncovered the lack of comprehensive health services to evacuation centers and issues on congestion, sanitation and the lack of enough supply of water.

Such conditions, the interfaith mission said, led to the common diseases that the evacuees experience in the centers, especially the children.

The Armed Forces of the Philippines has already denied the involvement of ground troopers in looting in Marawi. (davaotoday.com)