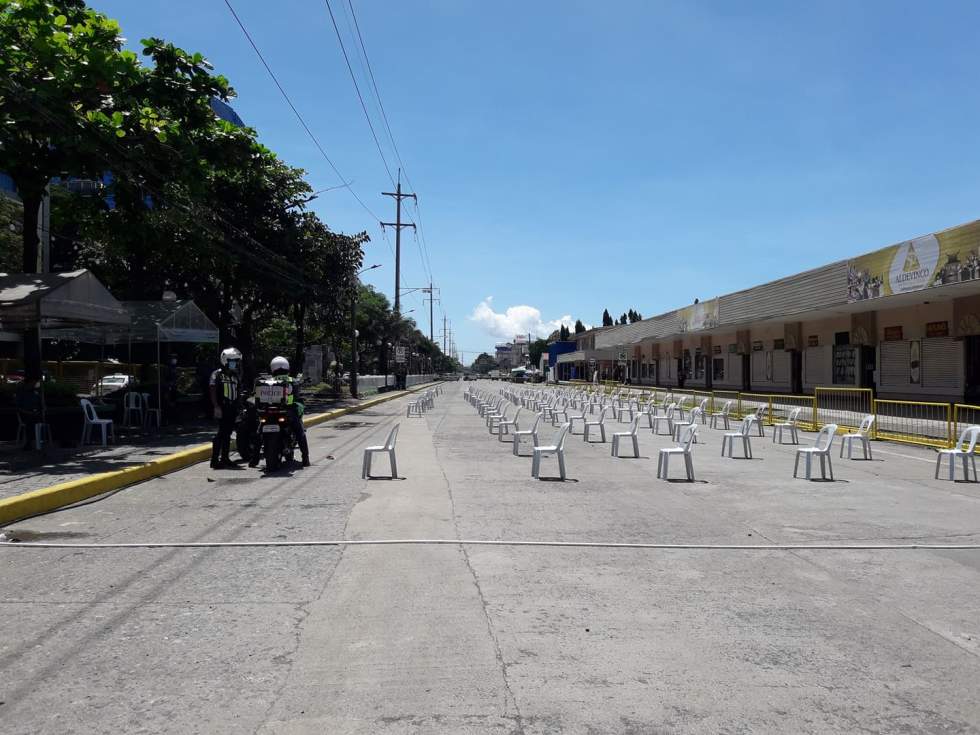 Plastic chairs are once again lined up at the grounds of Freedom Park in Roxas Avenue.The City Government must have prepared this to contain protest actions they assumed would be held by activists in the park in today’s Martial Law commemoration.
The city government made this maneuver during the July 27 State of the Nation Address that made activists pull out from the area.( Kenneth E. Cagula/davaotoday.com)

DAVAO CITY, Philippines – In the commemoration of the September 21 Martial Law, progressive groups forego holding their rally at Freedom Park where police awaited them to force them again to sit on plastic chairs.

The city government made this similar maneuver during the July 27 President Rodrigo Duterte’s State of the Nation Address, insisting that this is part of the protocols of social distancing. This thwarted the activists from staging their rally.

This time, the activists took their protest actions in some areas downtown while observing social distancing.

Activists all across the country staged protest actions today September 21 commemorating the 48th anniversary of the Martial Law declaration of the late dictator President Ferdinand Marcos, which ushered media censorship and attacks on human rights.

They also assailed the “de facto martial law” under Duterte with the signing of the Anti-Terror Law and worsening attacks on rights defenders and journalists.

“Activists and human rights defenders are being tagged as terrorists to justify the passage of the anti-terror law. This attack from the State is not new to us,” said PJ Dizon, spokesperson of the labor group Kilusang Mayo Uno Southern Mindanao chapter.

Progressive groups denounced the recent vilification campaign against their leaders, such as the series of “wanted posters” posted in the city branding them as “terrorists”, endangering their lives for attacks.

“But we are unionists, activists, and human rights defenders who continue to struggle for the interest of the Filipinos,” Dizon said.

The labor group reiterated their demand for a comprehensive plan from the government to address the COVID-19 pandemic and extend more economic aid to poor Filipino families as they suffering the brunt of the health crisis.

“As this pandemic closed down industries and bankrupt the government, millions of Filipinos have lost their jobs and are suffering,” Dizon said.

But instead of focusing on the people’s needs, “national debt is piling up, thousands of activists have been killed, the government sold out to foreign capitalists, corruption and plunder of our resources continued,” Dizon added.

In Manila, Human rights advocates offered wreaths at the Bantayog ng mga Bayani to honor the martyrs during the Marcos dictatorship. They also joined various groups in a protest action at the University of the Philippines Diliman on Monday afternoon.

Survivors of Marcos’ Martial Law organized under Samahan ng Ex-detainees Laban sa Detensyon at Aresto (SELDA) described the Duterte administration as “another fascist regime” with its abuse of power and brazen attacks on human rights.

“Even without the formal declaration of martial rule, Duterte shamelessly appointed military and police generals in different civilian government posts and agencies. Under the guise of maintaining “peace and order” and “going after corruption and terrorism”, state forces have come after members of the political opposition, activists working for social change, human rights defenders, and critics through vicious red-tagging, threats, illegal arrest, and killings,” they said.

Bagong Alyansang Makabayan (Bayan), said that the Duterte administration exploited the COVID-19 health crisis in the past six months under to push for the ambitions of a “dictatorship”.

“Duterte is as corrupt and fascist-like Marcos,” Dizon said, “he should be ousted.”(davaotoday.com)