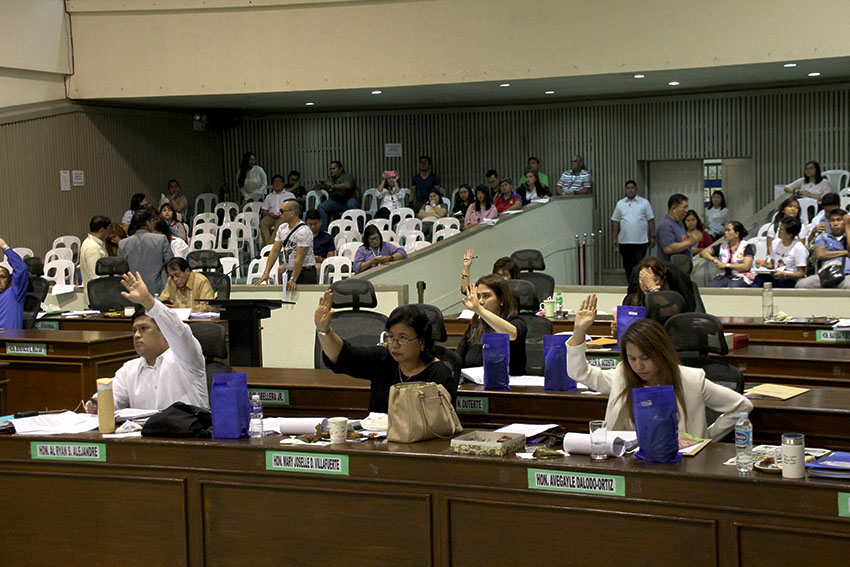 IN FAVOR. Majority of the 18th City Council members vote to pass the Anti-Unattended Bag Ordinance penned by Councilors Bernard Al-ag and Nilo Abellera on Tuesday, July 11, with the exception of Councilor Mabel Sunga-Acosta, who abstained. Acosta said she is in favor of the original ordinance but she finds the final draft “unreasonable” as it also fines violators whose act of leaving unattended bags did not cause panic to the public. (Paulo C. Rizal/davaotoday.com)

DAVAO CITY, Philippines — The city’s 18th council passed on the third and final reading on Tuesday, July 11, an ordinance prohibiting and punishing the act of leaving bags unattended in public places.

The “Anti-unattended Bag Ordinance” is one of two measures crafted by the council in a bid to strengthen the city’s security measures against terror attacks.

The other measure that will seek to penalize the act of recruiting members to the ISIS and its local allied groups is still subject to deliberation by the members of the council.

Under the approved measure, leaving a bag unattended in public places will incur a warning for the first offense, and administrative fines of P100 and P300 for the second and third offenses, respectively.

If such act will cause undue panic, the violator will be fined P1,000 and P3,000 for the first and second offenses.

Third and subsequent violations will incur either a P5,000 fine or one month of imprisonment.

The ordinance approved smoothly on Tuesday, with only one council member voting against its enactment.

Councilor Maria Belen Sunga-Acosta, the lone councilor who abstained during the casting of votes, said she preferred the original ordinance filed that will penalize violators only if the unattended bag causes panic.

In her privilege speech before the measure was approved by the body, Acosta questioned the act of penalizing what she referred to as “just the neutral act” of leaving a bag unattended, saying there was no actual basis for it if the act did not cause any panic.

She also raised concern the provision “might be going too far.”

The councilor also expressed fear the ordinance might leave everything to a law enforcer’s discretion, as the measure did not specify how long the bag had to be left for it to be considered unattended.

The proposed ordinance defined “Unattended Bag” as “any and/or all kinds of bag, box, baggage, package and the like whose (a) ownership, (b) contents and (c) the reason why it was unattended cannot be ascertained.” 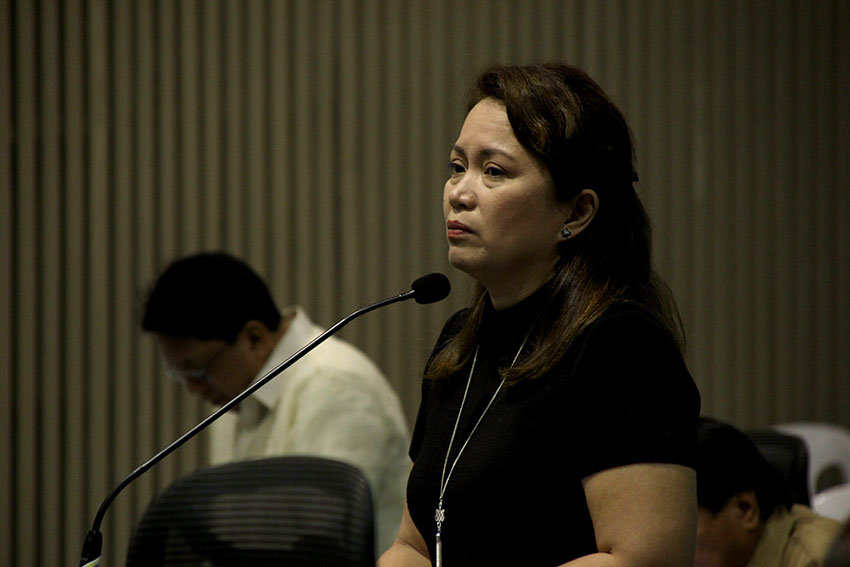 ABSTAINED. Councilor Mabel Sunga-Acosta abstains from voting on the Anti-Unattended Bag Ordinance, which the 18th City Council passed on Tuesday, July 11. Acosta said the final draft was “unreasonable” as it fines even those whose act of leaving bags unattended in public did not cause undue panic. (Paulo C. Rizal/davaotoday.com)

“An old lady, for example, leaves a bag unattended then walks away. How many seconds or minutes should it take before (it’s considered) an unattended bag, whose three elements as detailed in the proposed ordinance mainly: the identity of the owner, contents of the bag, and purpose why it was left there could not be ascertained?” Acosta asked.

Acosta said the absence of these definitions would leave it all up to the law enforcer’s discretion to determine the offense.

By this definition, Acosta said even the act of leaving a bag for a mere second would be a violation.

“The proposed ordinance lacks a wide range of standards to guide the local government authorities in carrying out the provisions of the ordinance,” she said.

Now that the ordinance was enacted on the third and final reading, it will be submitted to the office of City Mayor Sara Duterte-Carpio for final approval.

If approved by the mayor, the ordinance will take effect after 15 days of publication by two newspapers of city-wide circulation.(davaotoday.com)