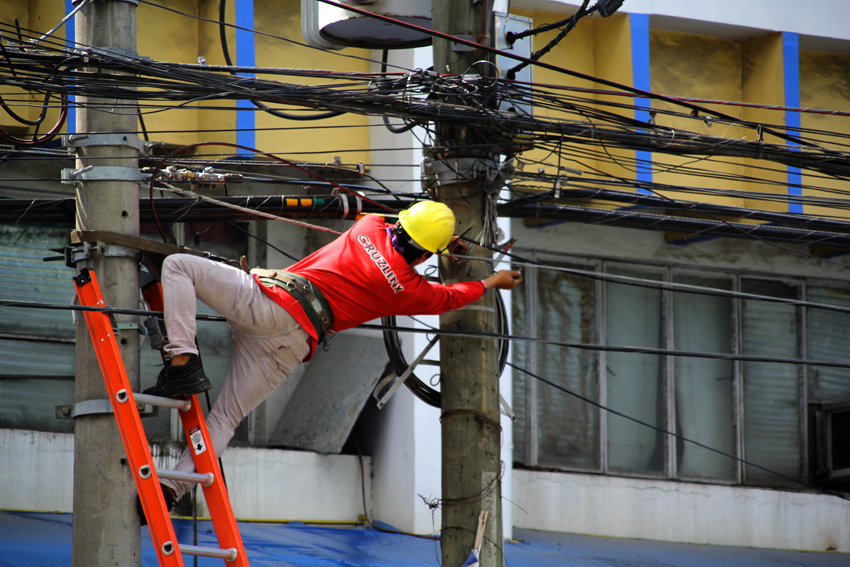 A worker fixes tangled cable wires along Ecoland Street in front of the Hall of Justice in Davao City. (davaotoday.com file photo)

DAVAO CITY, Philippines — The Committee on Public Safety has been hearing an ordinance for the safety of those who are working with high-voltage electrical lines. It’s now on first reading.

City Councilor Mabel Sunga Acosta said the proposed ordinance is based on the letter of Dr. Rizal D. Aportadera, a resident doctor of the Southern Philippines Medical Center Burn Unit. The committee conducted an investigation after a significant rise of patients who sustained low to high voltage electrical injury.

The letter of Dr. Apotadera reported that during the first quarter of 2018, there have been 21 patients with electrocution injuries at the SPMC Burn Unit.

According to cases of injury documented, “the patients were in their work area when the metal objects they were holding came in contact with high-voltage electrical current resulting to amputation of their extremities or their mortality.”

Acosta said during the committee hearings that big construction companies have safety standards and that most of those who were injured were informal workers who have been working without safety equipment and measures.

“The problem is with informal workers who are working without a contract or those who are working as carpenters in the neighborhood who do not have safety standards,” said Acosta.

There have been 87 cases of high-voltage electrical injury documented in the year 2017 in Davao City as well as in its neighboring provinces, according to Dr. Aportadera. (davaotoday.com)