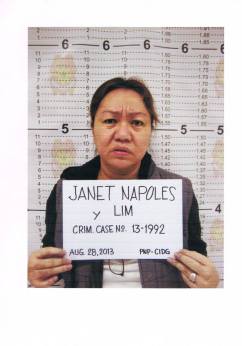 Why the special treatment?

Davao City residents interviewed by Davao Today did not hide their dismay over the perceived special treatment on Janet Lim Napoles, the principal figure in the multibillion pork barrel scam, as she walked escorted to Malacañang on Wednesday to surrender to the President after several days of being fugitive of the law.

Senior government officials, including Interior Secretary Mar Roxas, were immediately grilled by news reporters over perceived special treatment thrown on Napoles, including reports that President Benigno Aquino III personally went to the detention cell of Napoles in Camp Crame, and provided security for Napoles who claimed threats on her life.

Many of the residents in Davao City interviewed by Davao Today criticized the President and hurled suspicious innuendos on the fate of the P10-billion plunder charges leveled against her.

Reymond Pepito, former editor-in-chief of Ateneo de Davao University’s (AdDU) Atenews and now a media worker, said “Napoles is a criminal and yet, it seems like they are treating her like a blameless citizen”.

AdDU humanities teacher, Daphne Padilla, described the surrender a “bad script” to an anti-climactic situation.  “After the P10-million bounty yesterday we should have had a car chase, shoot out and maybe, a romantic angle for a week or so.”

Mary Karyn Sagot, a resident of Sto. Tomas town, said the surrender was “scripted to show Aquino government has effort to pursue Napoles and make her liable sa iya crime.”

Eva Pondillac, a store owner, said that Napoles may have been insisting that a threat on her life existed to protect herself. “Gihimo niya ni para mahimo siyang legitimate “state witness”—na among ginakahadlukan—kay kung mahitabo kini, dugay na pud mahatagan ug hustisya ang mga tao (She’s doing this so she can turn legitimate state witness – that’s what we fear – because if this happens, justice would not be served),” Pondillac said.

Protest leaders who joined the Million People March in Davao City were also suspicious of her surrender.

“I’d like to think that there was a big impact with our protests against the pork barrel and corruption in PNoy’s government. So, in order that the sympathy of the people is his once more, his men are running this script for him,” Degala said.

“We should not stop in calling out P-Noy to be accountable to stop all the corruption.  Let’s continue the call to approve the FOI and arrest corrupt officials including allies,” Degala said.

Bayan Muna Rep. Carlos Isagani Zarate said that Napoles’ surrender may taint the ongoing investigation, and expressed fear that she would be used by Malacanang to hit the opposition to the pork barrel and shield the Aquino allies and the President himself from the snowballing call to abolish it.

“Will there be any credible investigation in the corruption web spawned by the Napoles scandal, under these circumstances?  That is the biggest question now,” he said.

“This Napoles drama should not also distract the people from the real issues confronting the ambivalent Aquino administration: the abolition of the entire legislative and presidential pork barrel system — the cause of the massive and institutionalized corruption in our country, which the Aquino administration is still brazenly defending,” Zarate said.

Zarate and other members of the Makabayan bloc in Congress filed a bill to abolish the pork barrel, including the president’s special fund.

The anti-corruption group, Pagbabago Movement, warned that this is “Aquino’s move to wash himself clean and make his mud-ridden administration look competent in solving the problem of corruption”.

Aquino has formed an Inter-Agency Anti-Graft Coordinating Council composed of the Department of Justice, the Office of the Ombudsman and the Commission on Audit to look into alleged misuse of PDAF.

Pagbabago warned that Napoles may get a light sentence through her cooperation in the probe and said this may “save Aquino from public scrutiny”.

“Napoles will probably not just get a light sentence if she is proven guilty; she may be set free for her cooperation by implicating others, but not the President. The blame will then shift from the President to something else,” the statement said.

Gabriela partylist Representative Luzviminda Ilagan said, “Let’s not rest on the call to abolish pork. Napoles may have surrendered but the pork barrel remains. The challenge to Aquino is to abolish the pork across the board in all its forms”.

Bishop Modesto Villasanta of the United Church of Christ in the Philippines challenged lawmakers to check the scams in the PDAF and hold those accountable for misusing people’s money.    (MART D. SAMBALUD & TYRONE A. VELEZ,davaotoday.com)