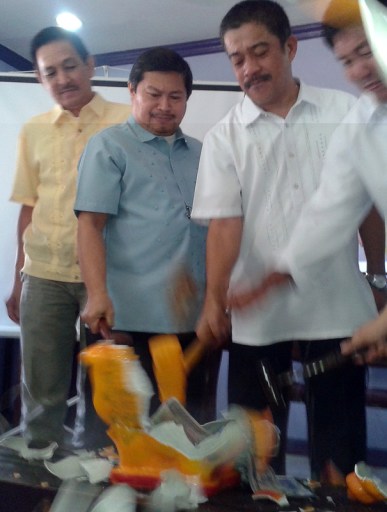 DAVAO CITY – People’s initiatives, protests and public advocacy are three ways raised by Davao lawyers groups for the public to continue the anti-corruption and anti-pork campaigns launched by various groups all over the country.

“We support this call. The people now do not trust their congressmen, the senators or even the President. It’s time for us to act,” said Estores.

Estores said one needs to get 3% of voters’ signatures per district and gather them together to reach six million.

The Commission on Elections would act on this petition to verify the signatures, then call for a referendum for voters to choose to abolish the pork or not.

He added that protests movement should continue to complement this initiative.

“Do we have to wait for (President) Noynoy (Aquino) to have a change of heart? We need to do all we can to stop all forms of pork,” Estores said.

Atty. Manuel Quibod, spokesperson for FLAG, believed many in Davao City would support the initiative.

But he said the anti-pork barrel issue should reach the grassroots, “including those who are beneficiaries of Congressmen’s soft-projects from pork such as scholarships and medicines”.

“We have to let them understand that pork is patronage politics. If we don’t take this matter up and clarify it to them, this becomes divisive,” Quibod said.

Quibod said FLAG and other groups wanted “continuing discussion on the pork barrel, an advocacy to educate the people and come up with alternatives and action,” he said.

Atty. Faye Risonar-Bello of APILA said the advocacy should point that “the source of corruption is patronage politics identified with the pork.”

She added that calls for transparency and accountability are not enough if the Freedom of Information Bill would not be passed.

IBP Davao President Jose Ilagan also urged the passage of the bill, noting that extent of corruption has been kept from public eye until the recent P10 billion Napoles scam.

“Corruption has been happening for a long time, but we never knew. We don’t know what the Commission on Audit (COA) has been doing. For this, it’s time that the Freedom of Information Bill (FOI) be passed in Congress. That way, we won’t be passed around government agencies as we ask for documents,” said Ilagan.

Bayan Muna Partylist Rep. Atty. Carlos Isagani Zarate, former IBP Davao chairperson, joined his former colleagues in their call for the FOI, as he said President Aquino forgot his campaign promise in 2010 to support the bill.

He warned that Aquino risks more isolation in the way he defends his lump-sum funds including the Malampaya Fund and DAP. Zarate said these two items are  essentially pork barrel under the discretion of one official.