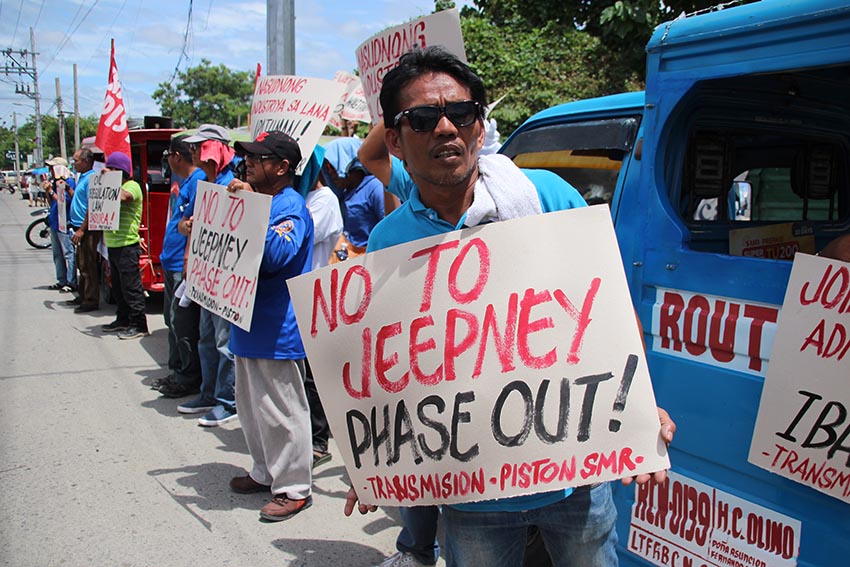 STRIKING DRIVERS. Members of the public transportation group Transport of Southern Mindanao for Solidarity, Independence, and Nationalism, voice out their disapproval of the impending Jeepney Modernization program of the Land Transportation Franchising Regulatory Board in a protest caravan held on Monday, Feb. 27 in Davao City. The group claims that some 500-600,000 drivers will lose their livelihood because of the modernization plan. (Paulo C. Rizal/davaotoday.com)

DAVAO CITY, Philippines (Updated as of 4:17 pm) — Members of the public transport group Transport of Southern Mindanao for Solidarity, Independence and Nationalism expressed fears of losing their means of livelihood when the Land Transportation Franchising Regulatory Board implements its Jeepney Modernization Plan.

The protest caravan in Davao on Monday was part of a nationwide protest of transport groups affiliated with public transit alliance group Pinagkaisang Samahan ng mga Tsuper at Operators Nationwide in a bid to register their defiance of the modernization plan, which they claim, would disenfranchise some 500-600,000 drivers nationwide.

Raul Gatchalian, 58, said he joined the protest caravan because the LTFRB’s modernization plan would hit jeepney drivers like him the most.

“Babag mi aning jeepney phaseout. Gagmay ra gud ni amo, pila lang ni among kitaon unya papaliton mi nila ug tag isa ka milyon nga sakyanan? Asa man mi’g kwarta nga ing-ana” (We are against this jeepney phaseout. We’re only small players, and our earnings are meager. And then they expect us to purchase a vehicle worth millions? Where are we going to get that kind of money), Gatchalian said.

“Among kita sa among sakyanan, igo-igo ra gyud nga ipakaon namo sa among pamilya. Ug kuhaon na nila, mura na nilag gipatay among pamilya (What we earn from is only enough to feed our families. If they take that from us, it’s like killing our families),” Gatchalian said.

Erwin Fernandez, Transmision-Piston spokesperson clarified, however, that they are not against modernization per se, but are only looking out for small players like drivers.

(I repeat, we are not against any form of modernization, if it ddresses the livelihood of the poor sectors, such as drivers. But if this modernization serves only the big capitalists who stand for bigger gains, then we will block it. Because this will kill the transportation sector, especially the small time operators and drivers)

In a statement, Piston claimed that the plan to replace old jeepneys with expensive electronic jeepneys/buses or those with Euro-4 engines, was in fact a “corporatization of public transportation to be dominated by foreign and local big businesses in the guise of reducing traffic and pollution.”

“The government has used the issue of the environment in pushing for the corporation of public utility vehicles. They said that electronic vehicles, or those equipped with Euro-4 engines would produce less pollution, but PUVs and PUJs only amount to 2% total of vehicles in our roads,” Piston said.

Piston also slammed the creation of  Fleet Management which they claimed would be ran by three corporations: the Transportation Equipment Aggregator and Management, the Global Electric Transport, and the Fil-Invest Electric Vehicle Expansion Enterprise, Inc.

Piston said the Fleet Management would not accept small time operators with less than 10 E-Jeeps or those who do not have the minimum P7 million capital.

Atty. Eileen Lizada, spokesperson of the Land Transportation Franchising Regulatory Board denied Piston’s allegations of a jeepney phaseout. Lizada said the modernization plan’s aim was only to upgrade the class of jeepneys plying the roads.
The modifications to be made in the current design of most jeepneys, Lizada said, would include moving the entry/exit points from the back to the side of the jeepney, as well as moving the fuel tank away from the driver.
“Ang tinuod ani, dili ni phaseout. Pagwapuhon lang para safe, dependable, reliable, ug eco-friendly ang atong mga jeepney” (Truth is, this will not be a phaseout. The jeepneys will only be modified to be safer, more dependable, reliable and eco-friendly),” Lizada said in an interview with ABS-CBN Southern Mindanao on Monday.
“Dili pud musugot si mayor ug karon President Duterte na mawala na kay garbo man nato na” (Then mayor and now President Duterte wouldn’t approve, because [jeepneys] are our country’s pride), Lizada said.
Lizada also mentioned that there will be a transition of three years upon the implementation of the order. Lizada said the government will be buying the jeepneys from the drivers, and the amount the drivers will be receiving can be used as part of the downpayment or equity to the bank.
Meanwhile, big manufacturing companies and body builders will also be given incentives by the government to build the jeepneys, which will have a streamlined design. Lizada said the LTFRB will no longer permit using scavenged components and parts from different vehicles.
“Dili na ta musugot anang ang chassis gikan sa laing sakyanan, engine gilan sa laing sakyanan tapos gibutang lang, gibuhat ang body” (We will no longer permit jeepneys who use chassis and engine from from different vehicles, and then they will just repair or build the body from there), Lizada said.
“Ang patakaran sa LTFRB, kung unsa imong oldest component mao to ang date sa imong sakyanan. So kung imong engine or chassis, 1970, bisan pag bag-o lang nimo gihimo imong sakyanan, 1970 model gihapon na (The LTFRB’s rule is that the date of your oldest component is the age of your vehicle. So if your engine or chassis is from the 1970s, then so is your vehicle even if you just built it),” Lizada said.  (davaotoday.com)
comments powered by Disqus