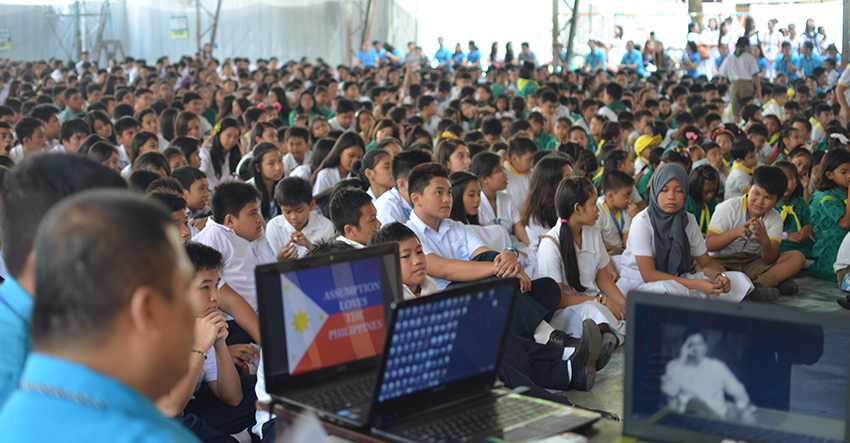 CATHOLIC SCHOOL. Hundreds of students of the Assumption College of Davao witness the inauguration of President Rodrigo Duterte through live streaming inside the school’s gymnasium. (Christian Lloyd Espinoza/Contributor)

DAVAO CITY — A Catholic school here held its own program for students and teachers to witness the inauguration of President Rodrigo Duterte on Thursday, June 30.

Administrators, students, and the faculty and staff of the Assumption College of Davao together with the Sisters of the Missionaries of the Assumption gathered at the school’s gymnasium to celebrate and congratulate the first President from Mindanao, hours before his inaugural rites in Malacañan Palace.

A screen was also set up at the stage for everyone to watch the livestreaming of the inauguration ceremony.

Sr. Marietta Banayo, school president said, this is the first time that they openly supported the head of the government.

“Historically, our students and faculty have been known to be critical of state policies that directly result to further destruction of the environment and the lives of the poor and oppression of the marginalized,” Banayo said.

She said the short program was “especially set as the institution’s statement of support for Duterte in his promise of a government that is for the poor, oppressed and marginalized.”

During the program, representatives from student governments, teachers’ union and clubs, as well as school administrators sounded 16 gongs in a symbolic representation of Duterte as the 16th president of the country and the waking up for the coming change.

Selected students, faculty, and staff also read in public their wishes and prayers for the new president. Their messages are of the same themes: for the president to make real his promises to the people, curb corruption, work for peace, and uplift the poor and oppressed.

A brief history of the past Presidents from Emilio Aguinaldo to Benigno Aquino III was presented and the crowd burst in jubilant cheers and raised their fists as a picture of Duterte appeared on-screen.

“I cried listening to the children as they read their wishes for President Duterte,” said Banayo.

Banayo added that Duterte serves as “a beacon of hope for the people especially the poor.” 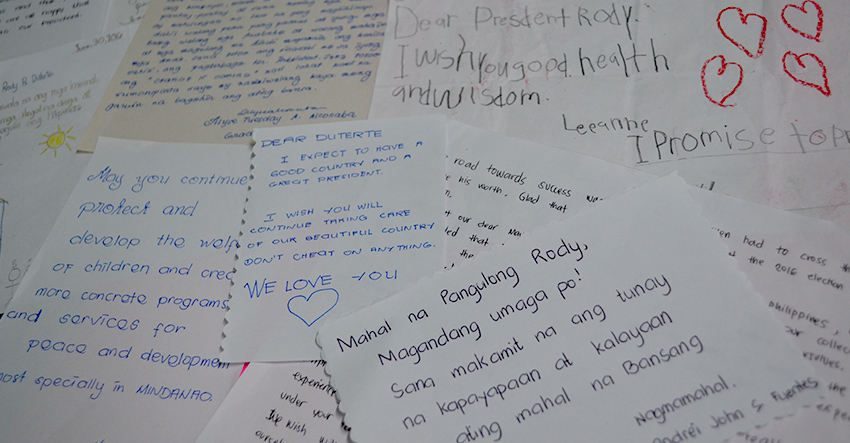 LETTERS TO THE PRESIDENT. These letters are written by students of the Assumption College of Davao for President Rodrigo Duterte. The school held a program to celebrate Duterte’s inauguration on Thursday, June 30. (Christian Lloyd Espinoza/Contributor)

She said they will send the students’ messages and wishes to Duterte’s office.

Banayo said Duterte’s pronouncements to work for national industrialization, agrarian reform, environmental protection, resumption of peace talks with revolutionary groups, upholding the rights of the Indigenous peoples and the Bangsamoro peoples, among others, “are at the core in the pedagogy of Transformative Education.”

“If he remains true to his promises and words, we will work with him and journey with him. We must end the massive displacement of the poor people brought about by the social injustices that has given birth to this civil war in our country, Banayo added. (davaotoday.com)