Demolition pushes through before residents celebrate the Ramadan 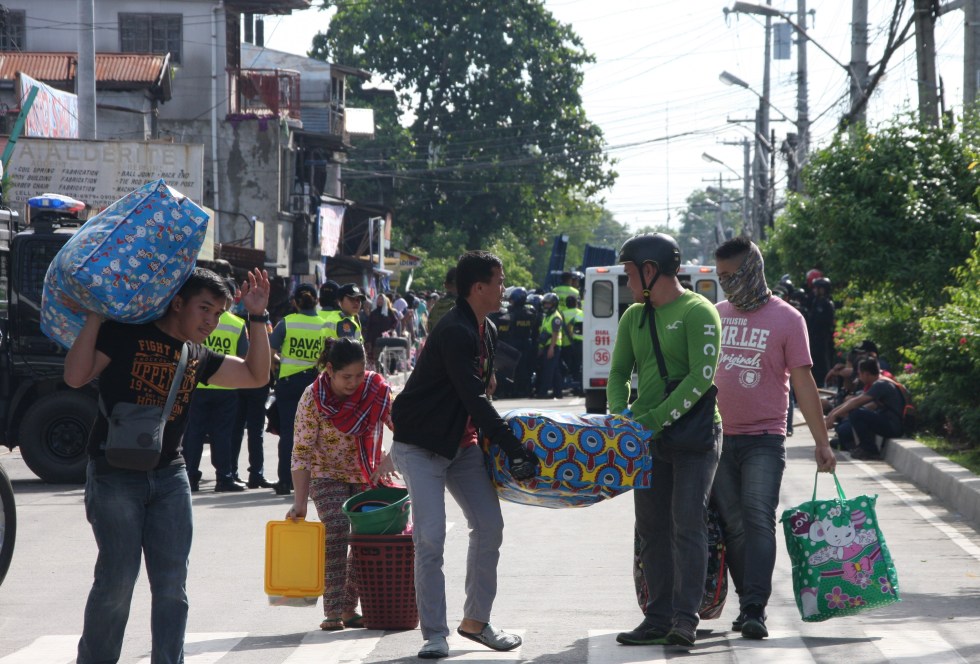 Salmonan residents in Brgy. 26-C in Davao City evacuate as members of the demolition team commence the dismantling of houses and structures in the area on Monday, May 7. The displaced residents are now taking temporary shelter at the Mini-Forest Gymnasium in Brgy. 23-C.(Kath M.Cortez/davaotoday.com)

DAVAO CITY, Philippines – The demolition of the 3,515-square meter plot in Barangay 26-C, Salmonan, Quezon Boulevard had pushed through despite the resident’s strong opposition early morning of May 07.

According to Omar Batara president of Quezon Boulevard Muslim-Christian Neighborhood Association, they did not know that the demolition will happen on Monday morning. It was only after they have received text messages that there is police personnel barricading their area.

“People are still sleeping when the demolition team came and cordoned the street. We cannot go out from our houses, if get out they will not let us come back and get our belongings” said Batara.

The demolition is supposed to happen on April 17 but because of the strong opposition of the residents to deter the attempt to dismantle their house, it was postponed.

Batara said that the association has filed a motion at the Supreme Court last April 30 to contest the issued writ of demolition by the Regional Trial Court branch 17. In addition, their lawyer has also had a talk with the authorities to postpone the demolition while waiting for the Supreme Court’s decision.

In 2011, one Datu Bahajin Mahadali claimed he owns the 3,515-square meter land where the Masjid is located. He said he has a land title # 2013002121 which he bought from the Garcia family. The association has refuted his claims saying that the land title indicated that the property is in Barrio Tugbok, Lianga, Davao City and not in Salmonan. 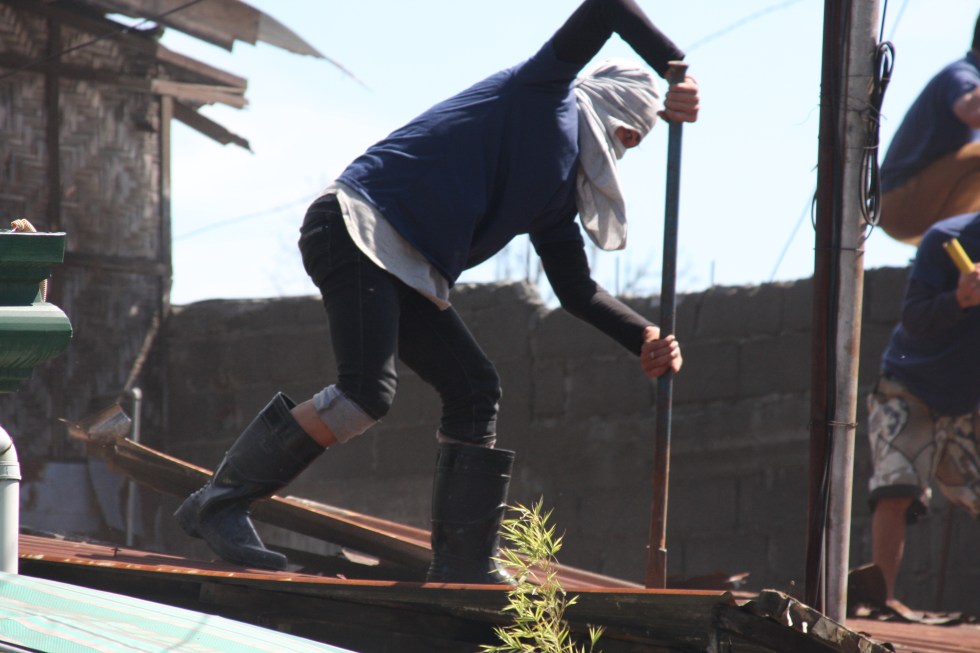 Members of demolition team wreck the roofs of structures and houses with sledgehammer during the execution of a demolition order in Brgy. 26-C Salmonan in Davao City on Monday, May 7. The Presidential Commission for the Urban Poor said the implementation of demolition will last for three days.(Kath M.Cortez/davaotoday.com)

The demolition of houses has affected 67 households consisting of 34 Moro families and 33 Christian families.

In an interview with Sittie Cabugatan who is living in Salmonan since 1974, the local government has not yet presented a relocation site for the affected residents.

“We don’t know where to go. It’s almost Ramadan but we were kicked out in our houses like dogs. They don’t even give us the chance to celebrate Ramadan. “ said Cagubatan with teary eyes.

Cagubatan also said did not bring all of her belongings when vacating her house because they are just given a 30 minute time to pack. With her are some their clothes, mattresses, some kitchen utensils and their Qur’an.

She became emotional upon recalling how they set up their house with years of hardworking.

According to Norman Baluro of the Presidential Commission for the Urban Poor (PCUP), they will still have to verify the master list of the informal settlers for them to decide how to help those who are affected with demolition.

Baluro said that “as my capacity, I am exhausting all my means to talk to the landowner to revert his offer to the residents”. 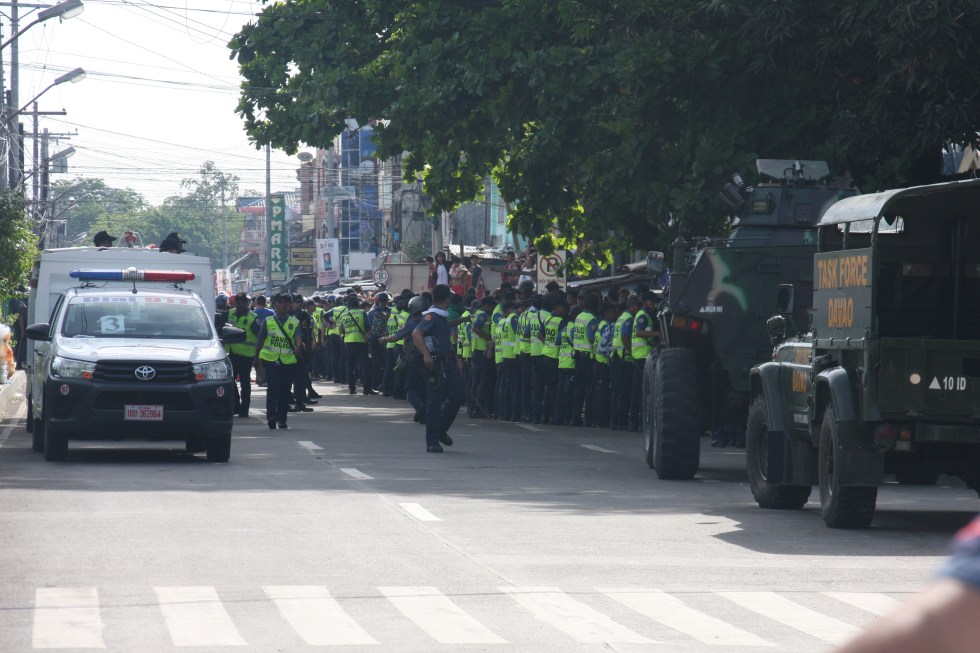 Elements of the Davao City Police Office (DCPO) and other security personnel are full force with barricades being set up as barriers as members of the demolition team dismantle structures and houses in Brgy. 26-C Salmonan in Davao City on Monday, May 7.(Kath M.Cortez/davaotoday.com)

Davao City Police Office (DCPO) City Director Police Senior Superintendent Alexander Tagum said they have enforced maximum tolerance to avoid violence during the demolition. Early morning on Monday, DCPO and the Task Force Davao have augmented “ enough people” to make sure the safety of the demolition team and the residents who are expected to have a violent reaction on the scheduled demolition. Snipers are seen positioned on top of buildings while monitoring the demolition of structures and houses in Brgy.26-C Salmonan in Davao City on Monday, May 7.(Kath M.Cortez/davaotoday.com)

“ as early as 5 o’clock in morning we are in a position to ensure that there will be no violence in today’s demolition,” said Tagum. 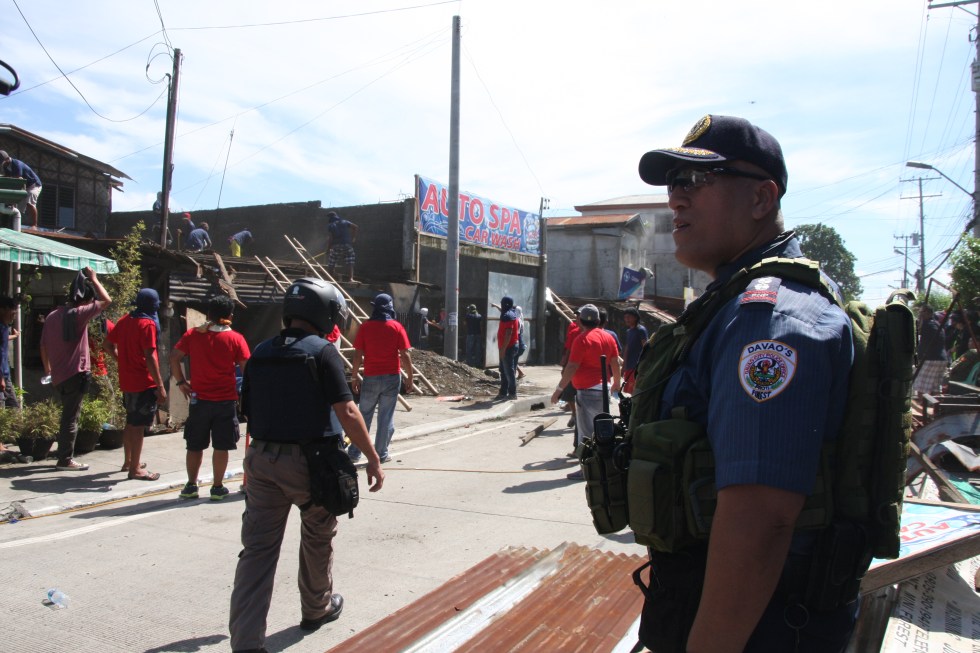 The City Director also reported that there three people arrested before the demolition but he clarified that it is “just for protective custody” so that they will not cause more violence. Tagum also said that if proven that these three people are “simple informal settlers, they police not file a case as a consideration”.