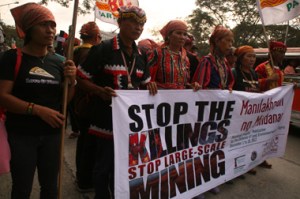 MARCH TO DENR. Delegates of Manilakbayan (A Journey to Manila) march towards the central office of the Department of Environment and Natural Resources in Quezon City Thursday, December 6. They called to stop political killings and large-scale mining in Mindanao. (davaotoday.com photo by Alex D. Lopez)

The delegates also displayed at the front gate of the DENR effigies representing the dead bodies of the victims of Tampakan massacre and black crosses bearing the names of leaders and environment defenders who were killed since the former Arroyo administration to present.

MANILA, Philippines — The sixth 6th day of Manilakbayan (Journey to Manila) saw a series of protest actions against government agencies believed to be responsible for the spate of killing of environmental activists and community leaders in Mindanao.

On Thursday morning, December 6, Manilakbayan delegates, supported by groups coming from different sectors here trooped to the main office of the Department of Environment and Natural Resources (DENR) central office for a picket-rally.

The delegates also displayed at the front gate of the DENR effigies representing the dead bodies of the victims of Tampakan massacre and black crosses bearing the names of leaders and environment defenders who were killed since the former Arroyo administration to present.

After the rally at the DENR, the delegates proceeded to the posh La Breza Hotel in Quezon City where the Commission on Human Rights (CHR), the Armed Forces of the Philippines (AFP) and the Philippine National Police (PNP) were having a meeting-conference.

Cristina Palabay, secretary general of human rights group Karapatan, criticized President Aquino for promoting military officers who were known to have a record of human rights violations.  Among them were General Eduardo Año, who was implicated in the abduction and forced disappearance of Jonas Burgos, and General Jorge Segovia, who was the 10th Infantry Division commander of the army when Rudy Dejos and his son Rody Rick were killed in Davao del Sur.

In a statement distributed to the media, Karapatan said that Noynoy Aquino’s recent promotion of the controversial military officers was “an outright disregard for human rights.”

Karapatan pointed out that the CHR is mandated to issue clearances to AFP personnel who are up for promotion, “supposedly as part of the government’s thrust to uphold human rights.”

“CHR only serves to cover up the dirty record of the AFP officers by issuing clearances even to those whose hands are tainted with blood,” Palabay added.

Noticeable to the delegates was the absence of any information material regarding the said meeting-conference placed at the hotel’s entrance.

In the afternoon of the same day, the delegates proceeded to the front office of the National Commission of Indigenous Peoples (NCIP) to continue their protest.

Genasque Enriquez of the Katribu party-list condemned the NCIP for doing nothing to alleviate the plight of the Indigenous Peoples (IPs) in Mindanao, whose leaders were killed or threatened by fake court cases.

“Asa man ang NCIP nga nagaingon nga sila ang ahensiya sa mga Lumad? (Where is the NCIP which claims that they are the agency for the indigenous peoples?),” Enriquez asked.

He added that NCIP does not serve to develop the Lumad communities but works for the interests of foreign mining companies.

At the end of the picket-rally, the delegates removed the tarpaulin in front of NCIP that declared that the Indigenous Peoples Rights Act (IPRA) has been implemented in the last 15 years.

The delegates said the law is useless for it did not serve the interests of the indigenous peoples in country.  (Alex D. Lopez/ davaotoday.com)