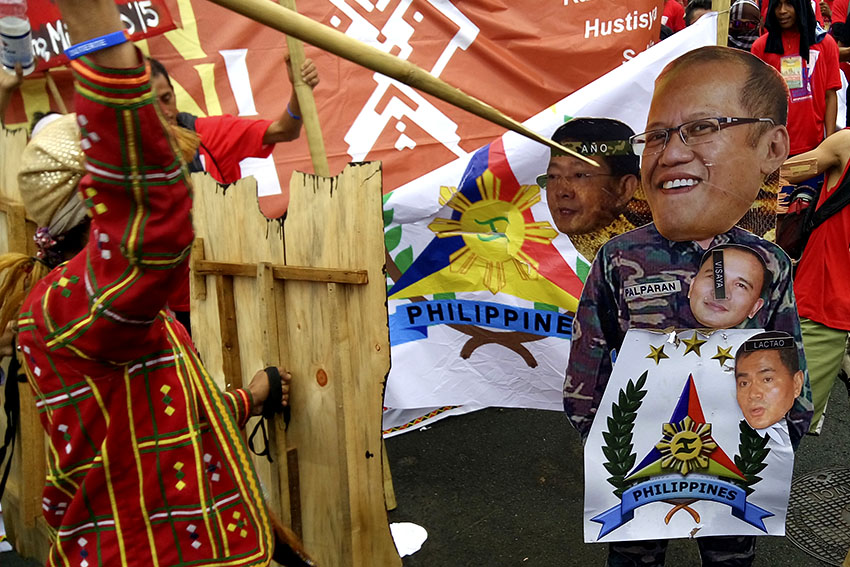 ON POINT. In a cultural act, tribal leaders from Manilakbayan protesters, spread photos of military generals and that of President Aquino in front of Camp Aguinaldo, Monday morning. (Earl O. Condeza/davaotoday.com)

QUEZON CITY – Amid heavy rains on Monday, an estimate of 500 lumads marched from People Power Monument to the national headquarters of the Armed Forces of the Philippines and the Philippine National Police to condemn the lumad killings in Mindanao allegedly perpetrated by the state forces.

Protesters marched towards Camp Aguinaldo where the Department of National Defense is located, as they demanded justice for the slain lumad leaders and environmental defenders in Mindanao.

Spokesperson of the Manilakbayan 2015, Datu Jomorito Goaynon said “the DND is not the department that defends the Filipino People, they defend the foreign companies that plunder the natural resources in Mindanao.”

Goaynon claimed that the state forces are the masterminds of the killings in Mindanao perpetrated by different paramilitary groups.

As the protesters marched closer to the gates of the Army headquarters, military personnel got inside and closed their gates. Protesters pounded at the gates showing their anger towards the agency.

The military offered bottled water and snacks but the protesters quickly responded with chants saying, “We do not need that, we need justice!”

Tarpaulins calling for justice for the slain Loreto, Agusan Mayor Dario Otaza greeted the protesters, but were covered with their banners and big tarpaulins.

Josephine Pagalan, spokesperson of Kahugpungan sa mga Lumadnong Organisasyon (Kasalo) in Caraga region, said that “the rain could not stop them from staging protest” in front of the army camp.

They covered the tarpaulin of the military, saying Otaza was a “druglord” in Loreto.

Pagalan claimed that “Otaza was the recruiter of paramilitary groups in Agusan,” which they accuse of being suspects in the series of killings in Mindanao.

“Lumad civilians who defended their ancestral domains were killed; our schools were attacked,” she said.

Pagalan added that their taxes which pay the salary for the state forces “are only wasted because [the military] violates the peoples rights in Mindanao.”

Kerlan Fanagel of the Lumad group Kalumaran, said that the “paramilitary groups created by the military sow killings, harassment, and culture of impunity among the lumads in Mindanao.”

Since 2010, under the term of President Benigno Aquino, the group recorded 71 Indigenous Peoples killed in the country. 52 of whom came from Mindanao.

Fanagel also criticized the call of the military on ‘stop lumad killings’ as according to him, “the call was originally for the lumads who were killed by state forces.”

“They [military] are mocking our call as they are the number 1 violator of human rights. The government just show their continuing policy on the killings and plunder of natural resources in Mindanao,” Fanagel said.

The group portrayed their anger through a “pangayaw” spearing tarpaulins and cardboards with pictures of AFP generals and the President Aquino.

The group then proceeded to the Camp Crame of the PNP to continue their protest as they lambasted the police’s snail paced actions on the investigation of the series of killings in Mindanao.

Ariel Rivera, son of Romeo Rivera who was “illegally detained” last March 2014 for being a New People’s Army spokesperson in Soccsksargen, said “it has been two years since my father was detained, until now he has not been freed.”

Rivera added that they have provided evidence proving that his father is not the spokesperson as what the military claims. “We got the birth certificates, marriage contracts to prove his innocence,” he said.

Ronnel Campos, kin of the Dionel Campos, a lumad leader killed last September 1 in Lianga, Surigao del Sur, slammed the PNP which has yet to arrest the suspects in the massacre. (davaotoday.com)