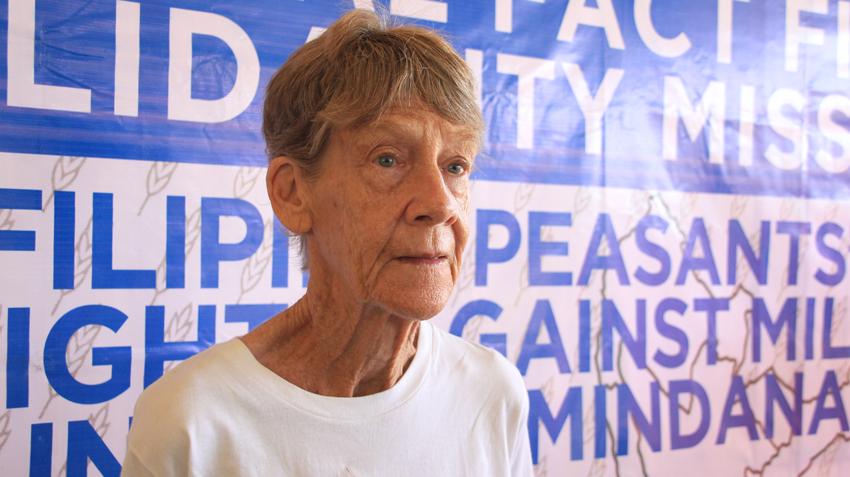 DAVAO CITY, Philippines — The Department of Justice (DOJ) has nullified the earlier order of Bureau of Immigration (BI) to Australian nun, Sr. Patricia Fox, to leave the country within 30 days. Her deportation order came after she participated in political rallies criticizing the administration of President Rodrigo Duterte.

In a resolution issued on Monday, Justice Secretary Menardo Guevarra declared the BI’s forfeiture of Fox’s visa “without legal basis.”

The Secretary of Justice said that while Philippine immigration laws give the BI broad powers in regulating the entry and stay of aliens in the country, visa forfeiture is not among those powers.

While he agreed with the BI’s contention that a visa is a privilege, he said “just because it is a privilege does not mean it can be withdrawn without legal basis.

“The B I cannot simply create new procedures or new grounds to withdraw a visa already granted to a foreigner,” Guevarra said in a resolution, as quoted in a press statement.

The decision nevertheless treats the case as one for visa cancellation, a procedure which, according to the Resolution, is among those allowed by the law and the rules.

Guevarra has likewise ordered the BI to ascertain whether the charge and the evidence against Fox make of a case for visa cancellation, for which specific grounds are stated in the law.

The Secretary also directed the BI to hear the visa cancellation case along with the deportation case against Fox which is already pending with the Bureau. ” Until a final resolution of the visa cancellation and/or deportation proceedings is reached, or until the expiration of her visa, whichever comes first, Fox may continue to perform her duties as a missionary in the Philippines,” he added.

Fox said she was “happy and surprised” over the favorable decision of the DOJ.

“I just heard that. I’m very happy,” she told reporters.

“We will just have to wait and see what happens, whether that affects the deportation case because that is separate from the visa issue,” she also said.

Bayan Muna Rep. Carlo Zarate welcomed this decision, saying “the DOJ, SOJ Guevarra especially deserves a pat on the back for reversing the BI decision. The facts speak for themselves: Sister Patricia Fox deserves to stay in the Philippines and continue her missionary works with the peasants, Lumads and poor Filipinos.”

Last April 16, Fox was arrested and investigated by the BI, which President Rodrigo Duterte admitted that he ordered because of Fox’s “disorderly conduct” and her attendance and participation in political rallies.

But her lawyers denied and contend ed that this was part of her religious and pro-peasant advocacy work.

Fox, the superior of the Notre Dame de Sion Philippine Province, has been doing immersion with peasants in the Philippines for 27 years. (davaotoday.com)