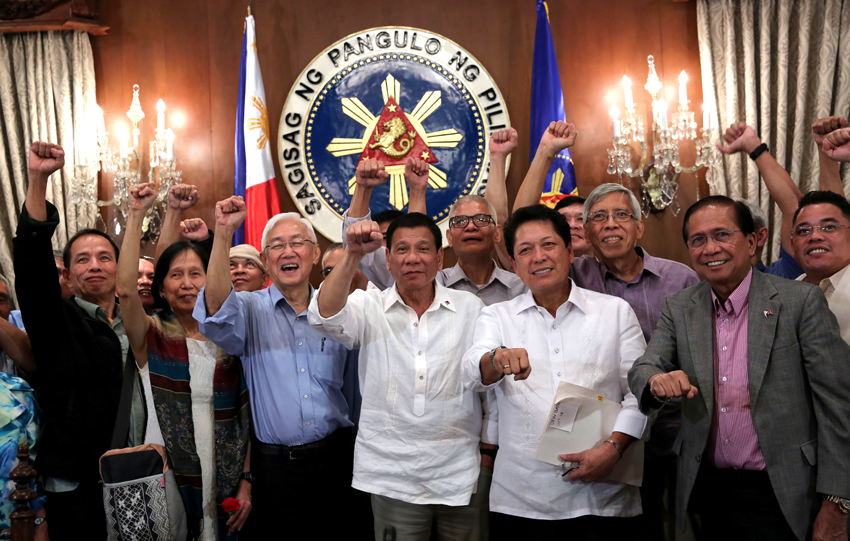 President Rodrigo Duterte with members of the Government of the Philippines and National Democratic Front peace panels following their meeting in Malacañang on September 26, 2016. (Malacañang file photo)

MANILA, Philippines — The Department on Justice (DOJ) wants the cancellation of the temporary liberty granted by the ​courts to detained National Democratic Front of the Philippines (NDFP) consultants and Communist Party of the Philippines (CPP) leaders after the talks between them and the government fell in limbo.

Justice Secretary Menardo Guevarra has directed prosecutors handling criminal cases against NDFP and CPP leaders to seek their return to detention following the suspension of the peace talks set last week in the Netherlands. He said he specifically directed state prosecutors to file the necessary motions before the Manila and Taguig regional trial courts (RTC).

“I have given instructions to the prosecutors concerned to move for the revocation of the court orders which allowed the NDFP consultants and CPP leaders to post/re-post bail and travel to the Netherlands or Norway, in view of the cancellation of the peace talks scheduled last week,” Guevarra said.

Once the courts grant the DOJ’s request, Guevarra said the NDFP and CPP leaders would have to return to their respective detention cells, and if they refuse, the courts may order their arrest.

The negotiations to end the decades-old leftist insurgency in the Philippines face uncertainty anew as the government had suspended the scheduled resumption of formal talks in Oslo, Norway from June 28 to 30, for three months to review its position and conduct consultations.

In a statement last Thursday, NDFP Chief Political Consultant Prof. Joma Sison revealed the real reasons behind President Rodrigo Duterte’s cancellation of the resumption of peace talks in Oslo was because of the Armed Forces of the Philippines and the Philippine National Police’s wish to carry out their end of 2018 campaign plan to supposedly finish off the New People’s Army, and to change the venue of peace talks to Manila, which the NDFP had earlier opposed as the talks may come under the control, surveillance duress and manipulation by Duterte and the military.

Sison also said the NDFP could no longer negotiate with a government headed by Duterte.

Sison also said it is relatively easier and more productive for the NDFP to participate in the “Oust-Duterte movement” and to prepare for peace negotiations with the prospective administration that replaces his regime.

But he later clarified on Friday that the peace talks have not been terminated, saying “only the National Council of the NDFP can make the decision to suspend, cancel or terminate the peace negotiations with GR and has not yet made such a decision.”

Last Saturday the progressive leader also branded Duterte as the “biggest spoiler” of the peace negotiations,” adding that he “will continue to do so as the President repeatedly, in sickening degree, demand that the venue of negotiations should be in Manila under his control, surveillance, manipulation, and duress.”

Since May 2017, Duterte has terminated the peace negotiations with the NDFP three times and fouled up every attempt to resume these through back-channel talks.

At the third termination in November and December 2017, he issued Proclamation 360 to terminate the peace negotiations and Proclamation 374 to designate the CPP and the NPA as terrorist organizations and filed a case before the Manila RTC to seek the proscription of the CPP/NPA and 600 individuals as terrorists.
​
The aforesaid actions of Duterte would have been enough basis for the NDFP to conclude that he is not at all interested in peace negotiations, Sison said. (davaotoday.com)