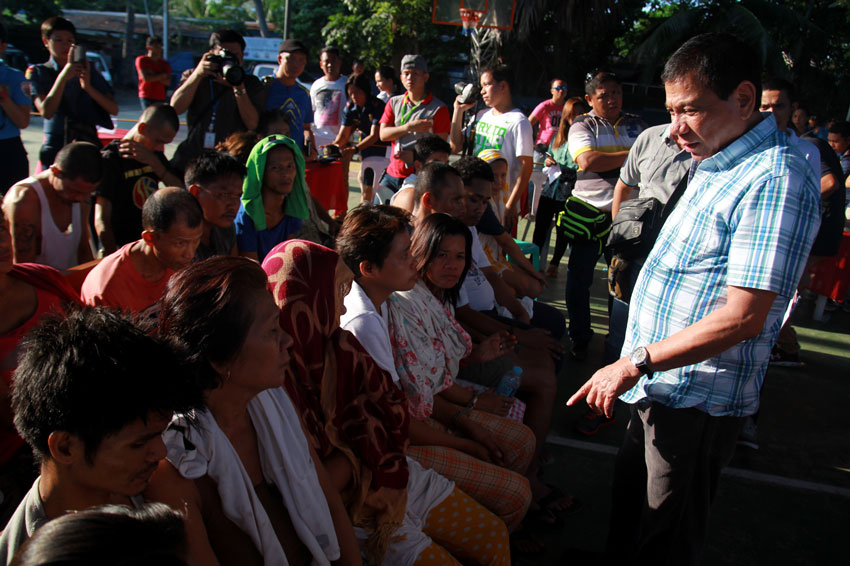 FILE PHOTO.The Duterte administration launches its new anti-drug campaign known as “REHABiNASYON” that will focuses on rehabilitation of drug reformists.

DAVAO CITY, Philippines — The administration of President Rodrigo Duterte will further strengthen its fight against illegal drugs with the launching of a new campaign that will focus on the rehabilitation of persons suspected to be into illegal drugs, particularly those who voluntarily turned themselves to authorities.

But for the urban rights group Kalipunan ng Damayang Mahihirap or Kadamay, the war on drugs of the government is doomed to fail despite its recent focus on rehabilitation because it missed grasping the root cause of the drug problem in the country.

On Sunday, February 3, the new campaign known as “REHABiNASYON” was launched during a national anti-drug summit at Marco Polo Hotel in Davao City.

REHABiNASYON is an inter-agency effort of government institutions that will focus on rehabilitation with a holistic approach to eliminate the country’s problems on illegal drugs.

The campaign is also seen to boost the continuing implementation of the anti-drug war of the administration of Duterte.

REHABiNASYON is a project of the Inter-Agency Committee on Anti-Illegal Drug created through Executive Order No. 15 series of 2017 issued by Duterte.

The committee is composed of 42 government agencies.

Presidential Communications Operations Office Assistant Secretary Ramon Cualoping III told reporters that the fight against illegal drugs is a top priority of the Duterte administration and that the purpose of the new campaign is to showcase the “many good things” done by various government agencies in implementing the anti-drug policy of the government.

Cualoping admitted the move is aimed to amplify the efforts of the government to counter the negative stories on the campaign against illegal drugs.

With REHABiNASYON, it is estimated that 90 percent of the efforts of the government on illegal drugs campaign will focus on rehabilitation and reintegration of drug reformists, he added.

Cualoping said rehabilitation and reintegration are most challenging compared to law enforcement though he admitted that all are vital components to effectively implement the anti-illegal drugs campaign of the government.

Arellano said the root cause of the illegal drug problem in the country is the widespread poverty.

“The administration’s campaign should accept that the main reason why Filipinos are into illegal is that of widespread poverty. This should be the agenda first and not the killing of poor people every day” the Kadamay leader emphasized.

The group also took note of Duterte’s bloody drug war that swept the country and claimed thousands of lives, particularly of the poor.

The government’s “Real Numbers”, specifically from the Philippine National Police (PNP) said a total of 5,104 drug personalities were killed during the 117,385 anti-drug operations conducted from July 1, 2016, to December 31, 2018.

The same data said 167,135 suspects were also arrested during operations in the same period that resulted in the confiscation of PHP25.62-billion worth of illegal drugs.

The PNP’s “Real Numbers” was slammed by various human rights groups in the country and abroad.

Human Rights Watch said around 12,000 drug suspects have already been killed under the Oplan Tokhang, the premier anti-drug campaign of the government.

During the launching of REHABiNASYON on Sunday, Cualoping described Oplan Tokhang as a good benchmark operation of the administration in giving the baseline numbers of drug suspects to 1.4 million individuals who voluntarily surrendered.

He added that this year, around 90 percent of the campaign of the administration on illegal drugs will focus on the rehabilitation and reintegration process of drug reformists.

The government will also expand its facilities to support the rehabilitation and reintegration efforts under the new campaign against illegal drugs, Bureau of Corrections Chief Nicanor Faeldon pointed out.

In a separate interview with the media, Faeldon said a total of PHP1.9 billion allocation has already been downloaded to BuCor this year to construct new dormitories.

Another PHP2.9 billion was also downloaded to the Bureau of Jail Management and Penology (BJMP) to address the problem of congestions in jails, Faeldon added.

“The marching order of the president is to address this problem,” he said.

Since 1932, the National Bilibid Prison has never expanded its infrastructures to address the congestion of inmates inside its decades-long facility.

Faeldon said past administrations have neglected to put up an additional facility that resulted to a bigger problem.

The over congestion of jail facilities in the country is contributed to the increase of arrests during the full implementation of the anti-drug program of the Duterte administration since 2016.

Reports of dropouts were indicated in the agency’s drug dependency evaluation and case management among reformist under the Community-based Rehabilitation and After Care Program (CBRAP).

In Davao City, CBRAP admitted that a total of 1,826 drug reformists from 3,894 enrollees have dropped out from their rehabilitation program in June 2018 under the Tabangan Atong Reformist Aron Naay Asenso (TARA NA-CBRAP).

“Reforming a drug dependent is a long process. Basically, through case management a reformist should be assessed in his skills and his well-being,” Hernandez said.

Hernandez also reminded the responsibility of the local government units down to the barangay level to step up in the rehabilitation process of drug reformist.

Barangay units, Hernandez added, should be the frontline of the rehabilitation efforts.

Both the big-time drug syndicates were killed during the operation while the government operatives seized dozens of packages believed to be containing shabu, Carreon added.

Another big-time operation was on the apprehension of illegal drugs inside the magnetic lifters recovered at the Manila International Container Terminal (MICT) and in General Mariano Alvarez in Cavite last August, Carreon said. (davaotoday.com)