Duterte​: Sentiment of the poor behind signing of free tertiary education law 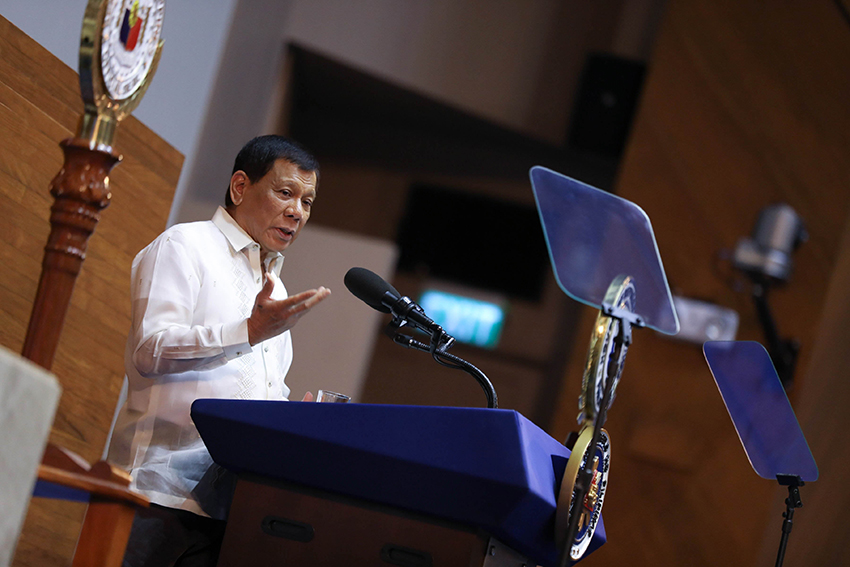 President Rodrigo Duterte during his second State of the Nation Address (SONA) at
the Batasang Pambansa on July 24, 2017. (KARL NORMAN ALONZO/PRESIDENTIAL PHOTO)

DAVAO CITY, Philippines — President Rodrigo Duterte ​said it was his sentiment for the poor families to get out of poverty through their children that persuaded him to sign the free education law.

He ​spoke for the first time about ​it w​he​n​ ​he visited anew government troops ​​fighting in in Marawi City on Friday afternoon.

The President on Thursday signed Republic Act (RA) No. 10931, also known as the “Universal Access to Quality Tertiary Education Act” which exempts qualified students from paying tuition and other school fees in any state or local universities and colleges.

Duterte said he understands sentiments of the poor families who worry of their children’s education.

“Mahirap lang din ako na tao. I mean, I… I have… I come from a poor father. Itong ano kasi ang disparity kasi ng mga mayaman pati mahirap, ‘yung… Kasi ‘yung iba they can pursue studies. They can go to UP kaya sigurado naman talaga na mas mataas ang standards. They can go to sa Ateneo, La Salle, UST. ‘Yung kasi ‘yung atin lang mga technical, technical, ang bata naman kung may utak, bigyan natin ng panahon (I am a poor man, too. I mean, I have come from a poor father. The disparity of the reach and poor… because others can pursue their studies. They can go to UP and they are ensured of their education because it has high standards. They can go to Ateneo, La Salle, UST. But ours can only get technical education. If a child is intelligent, let’s give them their time),” Duterte said.

Duterte said with the new bill, students may finish their college education and even pursue further studies. The President also promised to establish a trust fund worth P50 billion for the education of the children of soldiers.

Senator Sherwin Gatchalian, vice-chairman of the Senate Committee on Education, said Friday that the fight for free education was taken up by generations of student activists.

“We have come a long, long way from where we started with this advocacy. That battle cry of generations of student activists has now become firm government policy, and we are better for it,” Gatchalian said in a statement Friday.

He said the signing of the law “is the collective victory of everyone who has fought to uphold and defend the inalienable right of every Filipino to quality tertiary education,”

In her Facebook post Friday, National Youth Commission chair Aiza Seguerra said the President’s signing is victory to all Filipinos regardless of their ideology. He also warned the public to be vigilant on the crafting of the Implementing Rules and Regulations of the law to ensure this will benefit the Filipino youth.

“Pinirmahan ni Presidente, ipinasa ng ​C​ongress at ipinaglaban din ng mga aktibista ng napakaraming taon. Wag natin maliitin yon just because of our differences. Sila ang patuloy na nag ingay at nakibaka while we are all too busy living our normal lives. This victory is for all Filipinos, no matter what color or ideology. Ngayon, mas kailangan natin bantayan ang IRR ng batas na ito para masiguradong mapapakinabangan talaga ito ng kabataang Pilipino (The law was signed by the President, passed by Congress and was fought for by activists for so many years. Let us not belittle that fact just because of our differences. They were the ones who continued to struggle while we are too busy living our normal lives. Now, we need to guard the IRR of this law to ensure that this will really benefit the Filipino youth),” Seguerra said.

However, students who have already attained a bachelor’s degree are not qualified to the free tertiary education.

The law also established a tertiary education subsidy (TES) and student loan program for all Filipino students who will enroll in undergraduate post-secondary programs of SUCs, LUCs, TVIs, and private higher education institutions. The TES may cover tuition and other school fees, book allowance, supplies, transportation, and personal expenses, allowance for room and board costs, and expenses related to disability.

“The TES shall be administered by the UniFAST (Unified Student Financial Assistance System for Tertiary Education) Board and the amount necessary to fund the TES shall be included in the budgets of the CHED (Commission on Higher Education) and the TESDA,” the RA stated.

The student loan program will also be administered by the UniFAST Board. Payment of the loan amount will begin once the beneficiary secures gainful employment with income that reaches the Compulsory Repayment Threshold (CRT).

In a press briefing on Friday, Deputy Executive Secretary Menardo Guevarra said with the passage of the law, they are expecting Congress to make the necessary appropriations to fund the long-term government program on free SUC education.

Guevarra said the other sources of funding for the free education in SUCs include the official development assistance (ODA) and donations, both from local and international donors.(davaotoday.com)