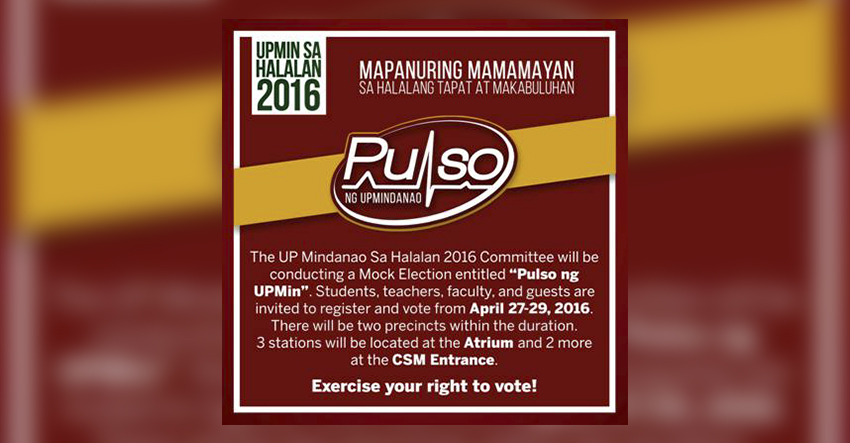 “Pulso ng UP Mindanao” mock-elections (Photo from UP Mindanao website)

DAVAO CITY – The tandem of Presidential aspirant Rodrigo Duterte and Senator Alan Peter Cayetano topped the mock election held last April 27 to 29 in the University of the Philippines in Mindanao.

UP Mindanao’s mock-election was participated by 29 percent of the voting population in the campus or a total of 438 faculty, students and staff using an automated software created by a student in the Computer Science program.

Incumbents of the first and second districts, Representatives Karlo Nograles and Mylene Garcia topped Pulso. While, Alberto Ungab who is the brother of the incumbent third district representative, Isidro Ungab, took the lead against rival City Councilor Karlo Bello.

Senior communication student, Sancia Novie Palma said that the mock election was a “commendable initiative” of the university.

On the results, Palma said: “I guess this reflects the fact that Mayor Duterte is from Davao, so he topped the poll”.

Meanwhile, Carla Louise Bayquen, a senior Biology student said that the mock election’s low voter turnout means there is a need “for the youth to encourage everyone to take part in a huge decision-making process that would determine the nation’s future.”

Palma said that the figure is a reflection that there is “a need to engage the students and staff [of UPMindanao] to participate in the election and to exercise their political and democratic rights.”

However, she said the voter turnout of 29 percent “is a good thing given the efforts to promote the mock elections.”

“Maybe, some of them [voters] do have appointments that is why they were not able to participate. But the result of the initiatives like this is, in a way, [is a] microcosm of the whole political spectrum of UP Mindanao,” Palma added.

For 3rd year Communication student, Kenneth Paul Senarillos, the 29 percent voter turnout could br due to “lack of publicity”.

“It was not publicized that much and the people are busy because it was already exams week,” Senarillos said.

The voting process of the said mock poll was automated. The voters were required to create an account to be able to log in to the system. They filled up the form which had the same format on the ballot used by the Comelec.

Senarillos said that it only took five to seven minutes in order to vote. He said a voter is asked to provide his name, contact details, and address.

The mock election had three precincts, with one of the precinctslocated at the Atrium and two precincts located at the College of Science and Mathematics. (with a report from Earl O. Condeza/davaotoday.com)