Duterte: My throat is ok

On Saturday, Lustre on his Facebook account posted that “somebody leaked the information to me that Davao City [Mayor] Rodrigo Duterte has cancer of the throat.” 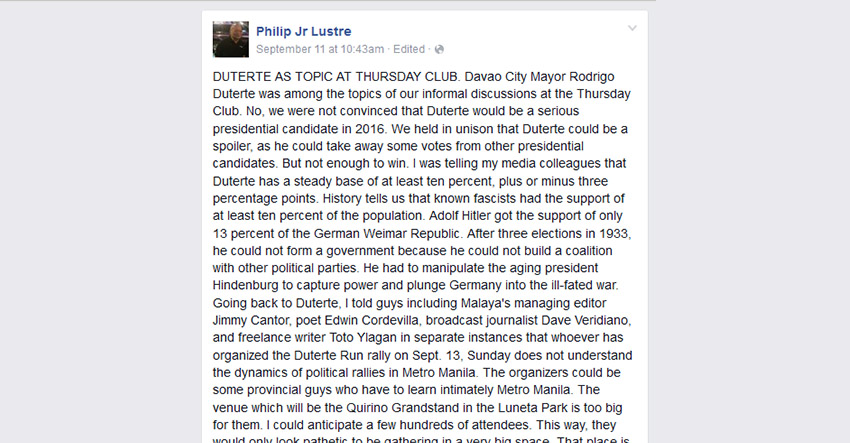 “His family is strongly against any presidential run for him because the nationwide political campaign would exacerbate his throat cancer. His health condition could cascade to terminal stage. The info was given to me by a reliable source, who was not authorized to speak about his illness,” Lustre said on his post.

Lustre said “(t)his is the reason he could not decide despite the frequent encouragement by his fans for him to run for president.”

“Since he is frequently described as a potential presidential candidate, it is his duty to make a full disclosure of every single detail of his health situation,” said Lustre.

Lustre’s post has been shared a total of 942 times as of this posting.

“My throat is okay including my tongue,” he said.

“Nothing wrong with the throat, and with the tongue and everything,” Duterte added.

Duterte also said that he is suffering from Buerger’s disease.

“It’s a constriction of the blood vessels because of nicotine,” he said.

Duterte said one of the reasons why he pushed for smoking ban in Davao City is because of his illness.

“I’m protecting all of you including our children,” he said.

Duterte also said that he has Barrett’s esophagus, which is a complication of the gastroesophageal reflux disease or GERD.

Duterte also has a spine problem after an accident with his motorbike.

“Nasemplang ako sa big bike, then something went wrong with my spinal (I had an accident with the big bike),” he said.

He said one of the neurosurgeons said “I can fix you.” But he said his doctors and his wife, who was a nurse in the US, didn’t agree.

Duterte also shared that he “suffers (from) headache 24-hours.”

He said that he is “wearing a fentanyl (patch)” to lessen the pain he is experiencing.

But Duterte denied that his health condition is the reason why he will not run and maintained that he has “no ambition” to become a president.

He said that even if he has cancer, it is not a basis for disqualifying a presidential candidate.

“If I can be president for two days, three, fine. There’s always the vice president,” said Duterte.

Lustre, however, said “I am standing by my story”.

“A mere denial does not mean that my story is untrue. Mayor Duterte’s biggest problem is his bigoted fans, who would keep on pushing him to run in 2016…. His already failing health would continue to face downhill if he does on a nationwide campaign to seek the presidency… That’s all I can say at the moment,” said Lustre.

Meanwhile, Duterte also reacted to political analyst, Professor Mon Casiple who commented that Duterte’s statement that he will not run is just a “tactic”.

Casiple said even if Duterte “categorically” said that he has no intention to run, the possibility of his running cannot be removed “until the filing of candidacy”.

“Huwag na lang kayong magrally-rally. Let’s try to find out if Prof. Casiple is right, because he may be right,” he said referring to the “Million March: Run Duterte Run” gathering at the Quirino Grandstand in Manila on September 15.

“I will have to talk to Prof. Casiple, why he was able to fathom my mind,” he said.