Duterte on Marawi crisis: I can wait a year 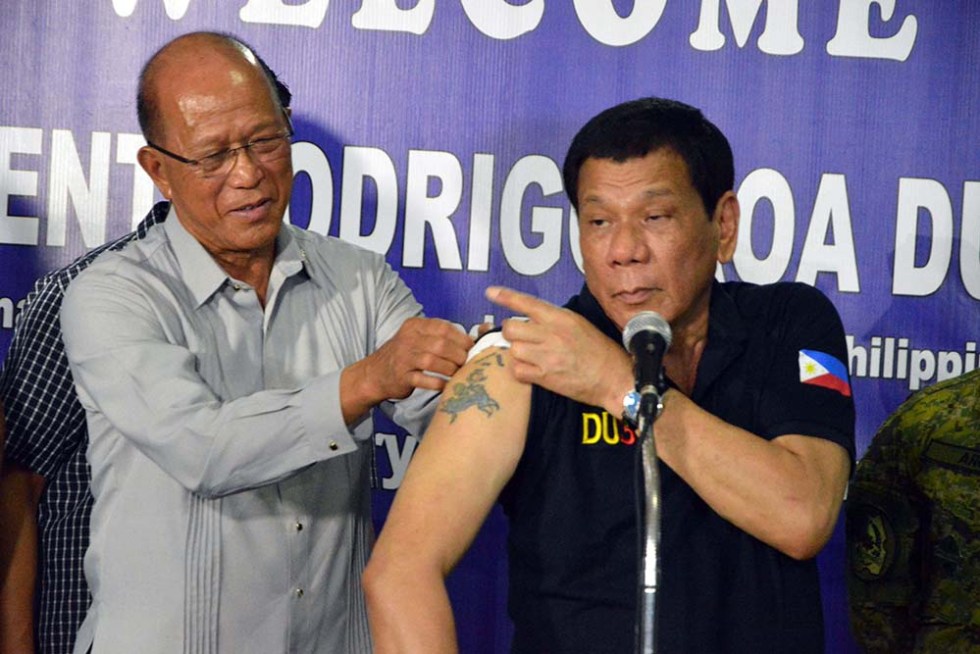 PRESIDENT’S TATTOOS. President Rodrigo Duterte shows off is tattoos – a long stemmed rose and the logo of the Guardians Brotherhood, during his visit to the wounded soldiers in Camp Evangelista Station Hospital in Cagayan de Oro City, Saturday afternoon, September 9. (Divina M. Suson/davaotoday.com)

CAGAYAN DE ORO CITY, Philippines – President Rodrigo Duterte is not giving any assurance that the crisis in Marawi City will be over this month.

During his visit here on Saturday, September 9 Duterte said a number of hostages are still held by the Islamic State of Iraq and Syria (ISIS)-inspired Maute group.

(The problem is they bivouacked insidenthe big mosque. I do not want to destroy or bombed that. It’s difficult.)
He said they tried not to bomb the religious structures in Marawi because it will “wound the feelings of the entire Muslim world”.

“I am not placing any timetable. Because pagsabi nila na, ‘well, we need another six months,’ eh ‘di, we’ll just have to wait it out. If I can save one life there, I am willing to wait one year,” Duterte said.

(If they say ‘well, we need another six months,’ then we’ll just have to wait it out.)

But Duterte guaranteed that if the Maute group will surrender without any condition, they will be treated fairly and due process will be afforded to them.

Duterte, however, reiterated he will not negotiate with the group.

The President confirmed that former Marawi Mayor Omar “Solitario” Ali was commissioned by Presidential Peace Adviser Jesus Dureza, to negotiate with the Maute to end the crisis in Marawi.

Ali, according to Duterte, proposed many things including the “talking of peace” to the Mautes and bargaining of hostages.

“Dureza and I, (Defense Secretary Delfin) Lorenzana, had a talk and they talked about the desire of Solitario to surrender because he found out that his name was on the list. Sabi niya, ‘I’m better off working for you than putting me in prison’,” Duterte said.

The former mayor and his son, Marawi City Vice Mayor Arafat Salic were recently removed from the Arrest, Search and Seizure Orders Nos. 1 and 2 that were issued against personalities who were suspected to have links with the Maute group. (davaotoday.com)