Duterte on Surigao mining: ‘I will shut them all’ 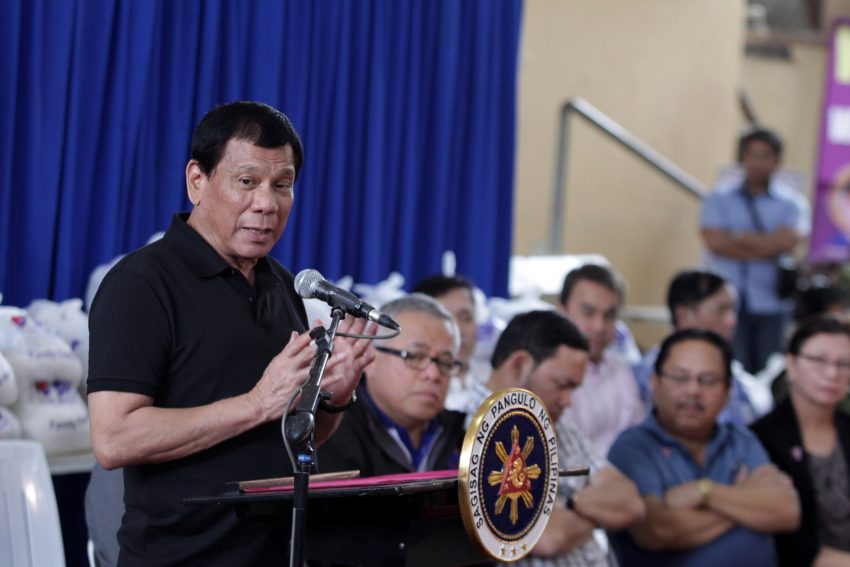 President Rodrigo Duterte narrates how rich the natural resources are in Mindanao as he delivers his speech while visiting the victims of the magnitude 6.7 earthquake in Surigao City on February 12, 2017. The President added that the natural resources found in Mindanao could be fully utilized if corruption and criminality brought by illegal drugs would be eradicated.(Robinson Niñal/Presidential Photo)

DAVAO CITY, Philippines—Philippine President Rodrigo Duterte said that he would not interfere with the decision of Department of Environment and Natural Resources Secretary Gina Lopez to close various mines in Surigao del Norte.

“I have told Governor [Sol Matugas], if Gina orders the closure of a mine, I won’t do anything,” Duterte told residents of Surigao City on Sunday.

“There is nothing that I can do because when I passed by the area, I really saw…Surigao City is the most-mined city… They will never be able to restore nature to what it was before. So I really will shut them all down,” he said.

The Mindanaoan president flew by helicopter Sunday from Butuan to Surigao City, one of the places hit by a magnitude 6.7 earthquake last Friday, to inspect the several areas were public infrastructure were severely damaged. The powerful quake also claimed the lives of eight individuals and injured a score of others.

It can be recalled that DENR issued a closure order of 23 mining companies following a nationwide mining audit of these companies was conducted. Of the 23 mines, seven are operating in Surigao del Norte while another seven is in Dinagat Island. The agency also issued a suspension order to seven mining companies.

DENR’s Lopez said that the mines ordered for closure have destroyed the watersheds, denuded the forest, polluted the rivers and caused a siltation of coastal waters.

However, Lopez’s decision did not sit well with Duterte’s economic managers, accusing DENR that it did not accord the mining companies the “due process.”

This prompted Finance Secretary Carlos Dominguez to call for a review of the DENR’s decision and check if “due process” has been observed, fearing the thousands of jobs would be lost if such closure order will be enforced.

But Duterte maintained that he fully supports the DENR’s decision and pointed out the mining companies would have to go to courts to overturn the agency’s decision.

He also vowed to provide livelihood for those residents that would be affected by the mine closures. The president also said that he would aid the provincial government to open more economic opportunities by developing Surigao’s coffee and rubber industries. (davaotoday.com)