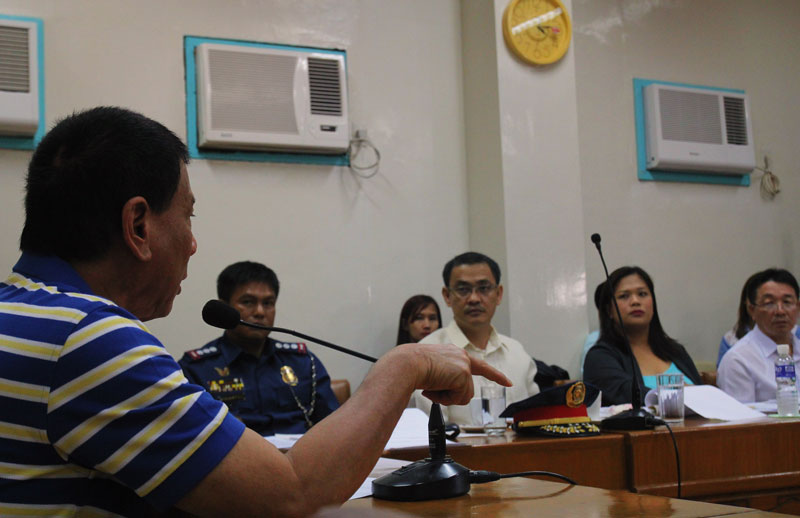 Duterte gave this order in a meeting with the city’s traffic officials Monday at City Hall that included the Traffic Management Center (TMC), Highway Patrol Group, and Land Transport Office.

This as Highway Patrol Group chief Rhodello Poliquit told Davao Today that his designation in Puan area alone had apprehended 40 violators on speeding last month and an average of one vehicular death per week.

Duterte said over the weekend he apprehended and “kicked” one ‘uso-uso’ jeepney driver, saying he was angry because “they think they have the insurance to drive like hell on the streets.”

The mayor said he is mulling on issuing an executive order that would authorize traffic enforcers to arrest traffic violators and their vehicles impounded, in enforcing a law on speed limit outlined by Republic Act 4136 Chapter V, Article I, Section 35 (An Act To Compile The Laws Relative To Land Transportation And Traffic Rules, To Create A Land Transportation Commission And For Other Purposes).

The said law regulates speed limits within the city streets to 20 to 40 kilometers per hour (Kph).

“I want you Gomer (Dy,) and Poliquit to be out there. Make arrests in public,” the mayor said.

He said he wants traffic teams to deploy two-thirds of their personnel at day, one-third by night to enforce the order.

Duterte said he is “fed up” with ‘uso-uso’ jeepney drivers who are back on the streets after being reprimanded and suspended few years ago following cases of vehicular accidents and deaths of passengers in the main thoroughfares.

He added that he is “aghast” to see children and their guardians scared to cross the streets because of speeding jeepneys, “even running across the pedestrian lanes as if running for their lives.”

The mayor also trained his sights on “noisy, speeding” private vehicles which were “driven by children of rich families who want to show off along Ecoland Drive and Quezon Boulevard.”

“Sa mga harurot (loud cars), arrest and impound them. Do not release them until I talk to them and to their parents. I don’t care who you are, you’re promoting class hatred here because you want to show off you are rich, and the rest are poor. If you insist on doing it here, fine, make my day,” Duterte warned.

He said Davao City is already highly urbanized and so there is a need to regulate vehicular speed.

“Why do I want arrests? One, it’s a serious violation of the law. Second, they are public nuisance,” he explained.

The mayor also said he would also ask 911 ambulance and police cars to follow this speed law, but would still discuss this matter with the LTO.

TMC head Dionisio Abude told reporters later that they would have their 60-personnel team ready to take on this task.

Poliquit admitted though it is difficult to go after drag racers, saying “they know where to race where there are no CCTV cameras to monitor them. And they disappear when we arrived after receiving reports.

He said they also have joint efforts with the TMC to deploy two teams each in the city’s north and south areas.

Dy said they are procuring equipment from the LTO national office to monitor speed limits of vehicles.

Dy also admitted that they thought “the ‘uso-uso’ problem is gone last year. But now we are regrouping.”(Tyrone A. Velez/davaotoday.com)