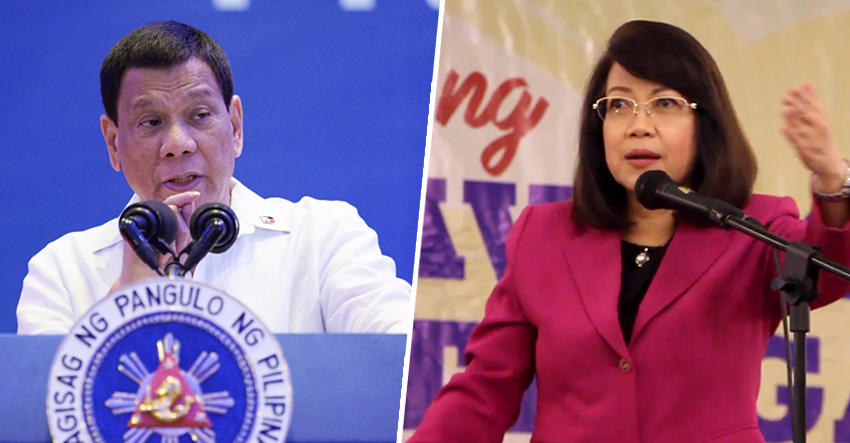 MANILA, Philippines – President Rodrigo Duterte ordered House of Representatives to expedite the impeachment of Chief Justice Maria Lourdes Sereno, as he declared the top magistrate an enemy he wanted to get rid of.

Duterte issued the scathing remark against the Chief Justice on-leave during Monday’s press conference at the Davao International Airport before flying to China for an economic forum.

“I’m putting you on notice that I’m your enemy and you have to be out of the Supreme Court,” he said of Sereno.

“I will see to it and after that, I will request Congress to go with the impeachment right away,” he added.

The President maintained that he was not behind any ouster plot against Sereno, but with her insistence, he said he would “beat” the Chief Justice and would even help investigators against her.

“Sinasabi ko na sa ‘yo na hindi ako nakikialam. O sige ka diyan, daldal ng daldal, upakan kita (I told you that I have not been meddling in this [ouster moves]. Now that you keep ontalking, I will beat you up). I will help any investigator,” he said.

Moments after delivering the speech, House Speaker Pantaleon Alvarez, a known ally of Duterte, reportedly said he would follow the President’s order.

The articles of impeachment against Sereno is currently pending before the lower Chamber as it awaits deliberations and approval by the plenary.

Once approved by the House plenary, the articles of impeachment would then be transmitted to the Senate, which would convene as an impeachment court.

On Monday, Gabriela Women’s Party Representatives Arlene Brosas and Emmi de Jesus said Duterte’s order to fast-track Sereno’s impeachment was an “affirmation that Duterte is the driving force behind the flimsy impeachment case against her.”

“This further erodes any semblance of decency or democracy that this regime hopes to project as it consolidates power by eliminating critics in order to complete its dictatorial designs,” the lawmakers added.

Kabataan party list Rep. Sarah Elago chided Duterte for “stating the obvious” triggered by his “fantasies of a dictatorship.”

“Duterte’s threat and declaration wanting Sereno out of the Supreme Court is a new low for his fantasies of a dictatorship,” Elago said.

“Duterte just merely stated the obvious – it is all along a scheme to oust the opposition and consolidate power and control over all branches of government. To order Congress to fast-track the impeachment proceedings is a desperate plea to fast-track charter change and dictatorial rule,” she added.

‘A smokescreen for quo warranto removal of Sereno’

Bayan Muna Rep. Carlos Isagani Zarate warned that the President’s verbal attack against Sereno might just be a “smokescreen” for the impending removal of Sereno through the “unconstitutional” quo warranto petition.

“Pres. Duterte’s verbal attack against CJ Sereno earlier and his order to Congress to fast track the impeachment process may just be a smokescreen for the impending removal of CJ Sereno via the unconstitutional quo warranto proceeding in the Supreme Court (SC),” Zarate said.

He said some information are now being floated that majority of the SC justices might give due course and remove Sereno via the quo warranto proceeding.

“We are calling on the Filipino people to stand up for what is right and just, and, guard against unwarranted developments in the quo warranto and the impeachment proceedings,” he added.

Aside from the impeachment case, Sereno is also facing a quo warranto petition filed by the Office of the Solicitor General. The petition seeks to nullify her appointment before the High Court.

Amid all the attacks, Sereno’s camp reportedly said she does not see the need to respond to Duterte, and would just let the public assess the “importance and relevance” of his statements. (davaotoday.com)