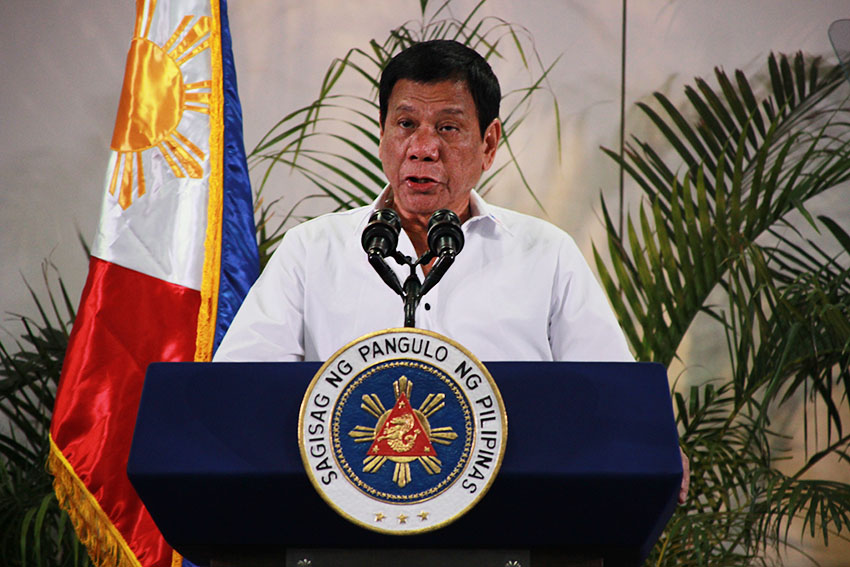 INDEPENDENT FOREIGN POLICY. During his arrival from the ASEAN Summits in Vientiane, Laos and his working visit with Indonesian President Joko Widodo on Saturday midnight, September 10, President Rodrigo Duterte stressed that his administration will pursue an independent foreign policy. (Paulo C. Rizal/davaotoday.com)

DAVAO – President Rodrigo Duterte said the most important message that he was able to deliver before foreign leaders at the ASEAN Summits he attended in Vientiane, Laos is that that the Philippines will pursue an independent foreign policy.

During the arrival ceremony at the Davao International Airport on Saturday midnight, September 10, Duterte stressed that his administration will push for an independent foreign policy and sovereign equality.

“In relations with the world, the Philippines will pursue an independent foreign policy. We will observe and insist – I repeat, I insist – on the time honored principles of sovereign equality, non-interference and commitment to the peaceful settlement of disputes to best serve our people and protect the interests of our country,” he said.

Duterte told reporters that he believes it was the “most telling words” he could say in any international gathering.

“It does not offend anybody, but it sends a message that we have every right to pursue an independent foreign policy without interference,” he said.

He said the pursuit of an independent foreign policy should cover all aspects of governance and international relations.

“In our country, it is the President who takes care of the foreign policy. It’s in the Constitution. And you can be very sure that this power given to me by the Constitution will be used only to promote the best interest of the Republic of the Philippines, nothing more.”

Duterte arrived from Jakarta, Indonesia, where he met with Indonesian President Joko Widodo after he attended his first international conference at the 28th and the 29th Association of Southeast Asian Nation Summits in Vientiane, Laos.

In a statement, Gabriela Women’s Party Rep. Arlene Brosas said that Duterte’s “growing assertiveness in bringing up historical points of Philippine sovereignty issues before intergovernmental fora” paves the way for policies independent of US interests.

She said “it may indicate that he may be the first elected president who can lead the country on an independent and perhaps neutral policy path for our best interests.”

The lawmaker also suggested that Duterte file complaints of war crimes against the US.

“The president might need to officially lodge justifiable complaints of war crimes committed by the US drone program in Mindanao, the bombings that involved covert US operatives in Davao, and other intervention incidents involving US interests,” she said.

The National Democratic Front of the Philippines also commended Duterte for his stance, saying the US government is “being challenged with open hostility by a government it considers its reliable lackey.”

“The US government should be reminded and brought to justice for the millions of deaths in its hands, perpetrated in the name of consolidating its imperialist power over other sovereign states,” said Ruby Del Mundo, spokesperson of NDF Southern Mindanao in a statement on Wednesday, September 7.

Not picking a fight

But Duterte said that he does not want to pick a fight with any country.

“I do not want to pick a fight with any nation now. That is farthest from my mind. I only want to be at peace with everybody doing business with everybody and no quarrels with anybody,”

He also said that the Philippines is “open for business” during the ASEAN Business and Investment Summit. He said the government will ensure that it provides an environment for business, including micro, small and medium enterprises, to thrive.

Duterte said that he is satisfied with the outcome of his first attendance to the ASEAN summits.

He said he was able to engage with the ASEAN leaders and dialogue partners on the issues of peace, security, stability, and prosperity in the region.

Duterte said that he was also able to express the country’s concern over the developments in the South China Sea.

“I stressed our commitment to the peaceful settlement of disputes in accordance with international law, including UNCLOS (United Nations Convention on the Law of the Sea). And I called on leaders to support the individual and collective effort to bring security and stability in the South China Sea through a rules-based approach for resolving maritime disputes,” he said.

“I am happy that I was able to do it during my first. These are the things that… I can sleep soundly well tonight thinking that I have served my country to the best the way I can,” Duterte said.

Duterte also discussed the issue of terrorism and violent extremism.

“And I urged leaders to redouble our cooperative efforts in order to address this menace,” he said.

Duterte also reiterated his fight against illegal drugs in the ASEAN summit and called for a “greater cooperation in the region, particularly in capacity building and law enforcement efforts.” (davaotoday.com)